CONVERSIONS: Weighing up the options 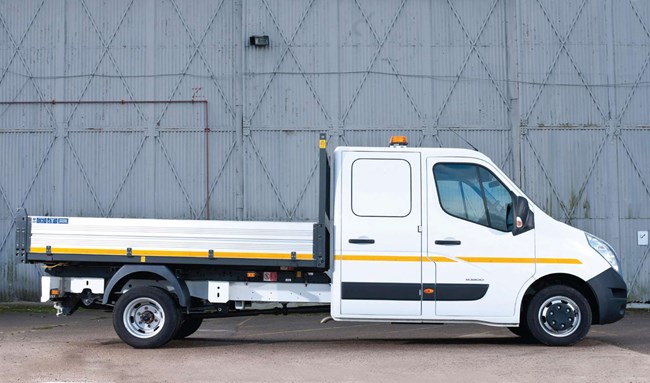 Choosing materials carefully is one way of cutting kilos

Building a body on a 3.5t chassis involves a constant struggle to save weight.

Every kilo clawed back matters because it is another kilo of payload the customer can carry. And the struggle is getting harder.

That’s because chassis are getting heavier thanks to the technology required to comply with ever-tougher exhaust emission restrictions and all the kit now fitted to vehicles. Aircon and airbags are without doubt desirable, but impose a weight penalty.

Venturing above 3.5t and opting for a 4.5t or 5.0t chassis instead is always an option, and will allow you to carry more. Doing so, however, means having to obtain a heavy truck operator’s licence (usually called an O licence), have a tachograph fitted, obey the heavy truck drivers’ hours rules, and recruit a driver with the necessary licence entitlement. And he or she will expect to be paid accordingly.

Fortunately, the 3.5t weight battle is not yet lost, but if bodybuilders are going to win it then they have to choose the materials they use carefully.

“Fit an aluminium tipper body and you can get a 20% better payload than you can get with a steel one,” says Matthew Terry, MD of London bodybuilder Tipmaster. “That means 1.1 to 1.2 tonnes on a 3.5-tonner, possibly going up to 1.3 to 1.4 tonnes if the chassis is a light one.”

Around five years ago Hampshire-based VFS was building tipper bodies out of mild steel on 3.5-tonners, recalls sales and marketing director Ashley Morris. It was increasingly finding that they were too heavy.

“Typically, they weighed around 650kg to 660kg, so we switched to high-strength steel and got the figure down to 510kg or less,” he says.

Some customers wanted an even greater saving, so VFS introduced an all-aluminium tipper body as an alternative. “That typically comes in at from 388kg to 410kg,” he reports.

Saving weight can cost money, but the switch to using high-strength steel has proved to be cost-neutral, says Morris, because less of it has to be employed. “We can use it at a thickness of 1.8mm to 2mm compared with 3mm for mild steel,” he says.

The situation is different with aluminium, which imposes a price hike of between 30% and 35%. Some customers may have no choice but to pay it however, if they want to equip their 3.5t tipper with ancillary items such as a cage and a pod to accommodate tools, while maintaining a respectable payload capability.

“Fit a body, a cage and a tool pod all made from high-strength steel, and they will weigh 700kg,” Morris explains. Have the same items made from aluminium and they will tip the scales at 500kg.

VFS’s aluminium tipper forms part of Renault’s Pro+ Commercial Vehicles line-up, as does a Luton body built by Truckcraft. Both are based on the Master.

Tipmaster’s Terry is conscious that aluminium is not cheap – and prices are rising. “We’ve recently seen them go up by from 5% to 7%, and when that happens, bodybuilders have no choice – the increase has to be passed on to the customer,” he says.

One way of maintaining a respectable payload capacity is to build the body on a lighter platform – something that weighs less than 3.5t, is more manoeuvrable and costs less to acquire and run.

Devon bodybuilder Trucksmith has done exactly that with Target. A dropside based on the 3.0t platform-cab version of Renault’s Trafic, and with a cargo compartment beneath the load bed, it can shift a 1,050kg payload. The body is built using a mixture of steel and aluminium, with aluminium dropsides.

Shropshire’s Ingimex has gone down a similar route. Built on a 3.2t Volkswagen Transporter, its Tip-up tipper can carry up to 1,000kg – as much as some 3.5-tonners can haul. The body uses alloy sides and an alloy and steel sub-frame, but a steel floor and tailgate.

Ingimex has been working closely with VW, and its Crafter-based tippers, dropsides and Lutons form part of the manufacturer’s Engineered to Go conversions programme.

There are other means of saving weight. Box and Luton bodies, for example, can be put together using strong adhesives rather than bolts, rivets and screws.

“Doing so can save you 15kg,” points out Roy Shelton, sales director at West Midlands firm Bevan Group.

A number of bodybuilders are heading down this path, including Maxi-Low from Leicestershire. Its first fully bonded body appeared at this year’s Commercial Vehicle Show.

Gluing bodies together rather than using mechanical fixings can make it easier to build them out of thinner, lighter, panels. “Use sandwich panels with a foam core to build a 20ft body rather than GRP (glass-reinforced plastic) and you can reduce the weight by 250kg,” Shelton observes.

An example of a box body that makes extensive use of adhesives is the VK.O Dry body for 3.5-tonners unveiled by trailer and bodybuilder Schmitz Cargobull last year. The glue used allows enough time for all the components to be repositioned if necessary before it sets.

Repairing bodies that have been glued and then suffer extensive accident damage can be problematic however, admits Morris from VFS, because not all crash repairers have the skills to carry out the work.

“If the damage is serious enough we suggest that the vehicle comes back to us for repair,” he says. “An alternative could be for us to supply the customer with a replacement body. He can then simply take the old one off and put the new one on.”

Bodybuilders are not the only ones seeking to lighten the load. Van load-area racking manufacturers are pursuing the same policy.

Modul-System, for example, has come up with an onboard workbench that has been constructed using sandwich panels with an extruded polystyrene core and fibreglass-reinforced polyester surfaces, instead of plain wood. It is around 60% lighter as a consequence, says the company. This means a 1.5m-long bench only weighs 7kg compared with 19kg for the wooden version, Modul-System says. Furthermore, the new workbench is not sensitive to moisture, which can make wooden ones warp and change shape.

Modul-System has marketed its products under the Tevo banner in the UK for over 10 years.

However, it has decided to retire the Tevo brand and will operate under its own name instead.
Other racking manufacturers that have attempted to cut the kilos include Sortimo – its Globelyst line-up makes extensive use of aluminium – and Bott, which employs a hybrid aluminium and steel construction for its Vario storage system. Van Guard too relies heavily on aluminium for its racks.

For many operators cargo volume is as important as payload, One of the most significant phenomena in bodybuilding over the past few years has been the advent of big-capacity Luton

bodies often built on 3.5t chassis platforms that offer a low loading height. Maxi-Low and Trucksmith have both been pioneers in this area, as has Leicester-located Doyle’s. To take an example at random, Trucksmith’s LoLoader Luton based on a Citroen Relay or Peugeot Boxer 3.5-tonner can offer up to 24m3 of space. It can also handle a respectable payload of up to 1.3t thanks in part to the use of light-in-weight glass-reinforced polyester composite body panels using high-density recyclable foam.

Trucksmith makes the point that it can be driven on a car-driver’s licence and without the need for the operator to acquire an O licence. Venture above 3.5t and you become enmeshed in a cat’s cradle of tough regulations – something LCV owners would far rather avoid.

Despite the trials and travails of Brexit several bodybuilders report that demand for their products is booming.

With Ford as its biggest client, VFS built 9,500 bodies last year across its two sites – it opened a second factory, in Wakefield, West Yorkshire, in October 2017 – and hopes to increase output to 11,500 this year, says marketing director, Ashley Morris.

Nor is there any let-up in demand so far as Tipmaster is concerned, says MD Matthew Terry. It supplies a lot of operators in London and the south east, and they have been busy ordering vehicles that meet the requirements of central London’s Ultra Low Emission Zone. It came into force on 9 April, and imposes a £12.50 daily penalty on any diesel LCV that does not meet Euro6. That can add up to a growing mountain of cash if you’re in and out of the middle of the capital every day. Businesses affected may conclude they have no choice but to invest in compliant chassis and swallow the cost.