Iveco has introduced a host of new features to its Daily van to meet the needs of today’s operators, James Dallas reports. 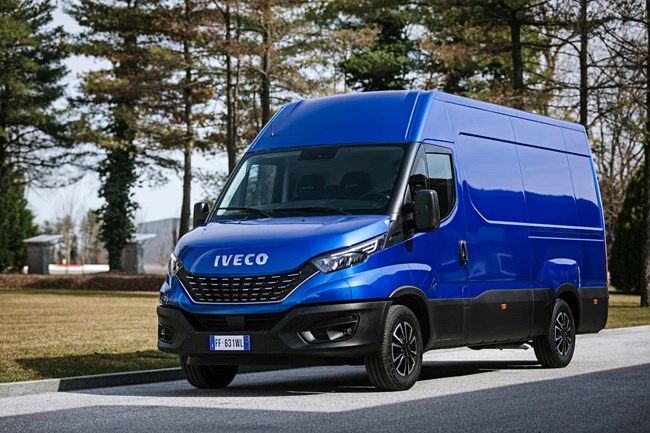 Iveco is focusing on bolstering connectivity and driver assistance features on its facelifted Daily as it seeks to bring to market a light commercial vehicle that meets the needs of contemporary businesses.

The brand acknowledges the industry is undergoing change at an unprecedented rate with digitalisation, electrification, automation and tailored customer service becoming dominant trends.

As Gerrit Marx, Iveco’s newly installed president of commercial and speciality vehicles, explains: “We have a clear roadmap for the future, a strategic vision that addresses the key trends driving our industry.”

The engines powering the Daily line-up remain the same as those introduced in 2016 when the Euro6 emissions standard was adopted.

There is a choice of 2.3 and 3.0-litre diesels and electric and CNG versions are also available.

Customers can chose between six-speed manual or the consummately smooth eight-speed automatic Himatic transmission, although the 3.0 150hp is only manual while the most powerful 3.0-litre 210hp unit is exclusively Himatic.

The Daily now gets a smaller, leather-coated, multi-functional steering wheel that can for the first time be adjusted for height and reach, making it easier to find the best driving position, and another new addition is electric power steering, a system already employed by rivals such as VW on the Crafter and Mercedes on the Sprinter.

It requires less effort from the driver at lower speeds than the previous hydraulic set up, which takes the strain out of city-based assignments, as does the introduction of an electric, push button parking brake to replace the old handbrake, a change that Iveco claims makes life much easier during the course of the day for busy parcel delivery operators.

While it also facilitates getting from one side of the cab to the other it is not  clear how the brand calculated that the new device could save operators up to five hours a month in delivery times.

The introduction of a three-piece bumper should reduce repair costs following minor collisions, with only the damaged section, rather than the whole unit, needing to be replaced.

LED lights are another new feature on the facelifted Daily. The brand says they improve visibility and obstacle perception by up to 15%, but like much of the other new kit it is not yet clear on which models they will be standard, or otherwise, how much they will cost as options.

With driver-focused additions combining with the Daily range’s payloads of from around 1,000 to 1,420kg and load volumes spanning 9.0m3 to 18.0m3, Norberto Codegone, Daily product manager, claims: “It drives like a car and loads like a truck.”

But it is in the Advanced Driver Assistance Systems (ADAS) to which the engines are harnessed where the real changes are taking place.

The Advanced Emergency Braking System function can activate the brakes at up to 50km/h (31mph) by detecting the potential for a collision if the driver fails to intervene and, Iveco claims, can also prevent accidents at speeds of up to 80km/h if the vehicle in front is travelling from 10km/h.

At the other end of the scale, the City Brake Pro system kicks in at speeds as low as 5Km/h to stop bumps happening in busy traffic. Iveco claims City Brake Pro can cut the frequency of low-speed collisions by up to 38%.