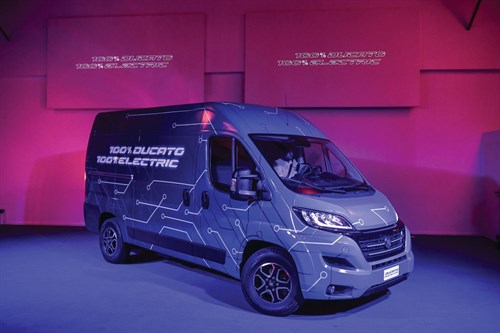 (Continued from page 1) “The first driver is our lifestyle,” Gigou continues. “Shopping on the net has changed us forever. The point is we use online services and pay with virtual money, but when it comes to physical objects, from groceries to TV sets, they must be distributed by physical means of transportation, and e-commerce makes delivery crucial for all businesses. More and more goods are to be handed over with extra frequency, and all while facing increasingly stringent traffic and emission regulations. This is a world that needs the Ducato. The delivery world represents 20% of the total LCV market and this number is growing, but it [delivery] represents 30% of Ducato users. This is one of the major contributors to the European leadership of the Ducato.”

With home delivery such an important segment for the Ducato, it’s not surprising to find that it is one of six key sectors highlighted by the manufacturer as a target for the electric Ducato. It will become the first full-electric model in Fiat’s line-up and promises to have the best range of any current large electric van in the market. A 90kW motor developing 280Nm of torque will be used to power the van, with a modular battery pack system to allow operators to choose between either a 136-mile claimed range or a segment topping 223-mile range from battery packs with 47kWh or 70kWh capacities, respectively. In order to preserve range, top speed will be limited to 62mph, but the Ducato will support fast charging, enabling a 30-minute charge to add around 60 miles of range. Production for the electric Ducato will be in-house, straight off the production line in a separate sub-assembly area that is different to how joint-engineered products from Citroen and Peugeot operate with their Relay and Boxer electric vans converted by a third party.

The all-important segment-leading payload is maintained even in the battery-electric vehicle (BEV), and although figures for payload across the range have not been confirmed, the headline figure is a best-in-class capacity of 1,950kg from a GVW of 4.2 tonnes – the maximum permitted weight of a BEV to be driven on a car licence in Europe. Load volume remains unchanged due to the batteries being housed between the chassis and under the floor, which means there’s up to 17m3 of useable space.

Gigou describes the electric Ducato as the “first zero-emission LCV that doesn’t make you choose between sustainability and payload”, adding that the “Ducato electric is the right vehicle, with the right propulsion, arriving at the right moment”.

That moment will be in 2020 when Fiat believes the total cost of ownership will be on a par with the diesel engine Ducato. Although pricing has yet to be announced it is expected there will be traditionally higher upfront purchase costs that will be offset significantly with cheaper running costs.

Fiat estimates that more than 25% of the van segment is ready to go electric and has conducted more than 620,000 miles of testing over the course of a year with 4,000 vehicles to determine the usage patterns of LCVs. As a result, a pilot scheme will initially be launched for the electric Ducato with selected Fiat Professional customers trialling the vans.

As already mentioned, Fiat has identified several key segments including home delivery and tradespeople. Of the six areas identified Fiat believes it represents 70% of the potential audience for BEVs. As a result, pilot projects involving several large companies are underway in order to identify specific user demands, which Fiat says will then assist with the individual customisation and configuration of the van.

Whether or not the Ducato is even comparable to Da Vinci’s drawings and calculations is not the question Fiat wants to answer, but whether or not its customers can have the vision to see how large electric vans can transform transportation. As Gigou tells us: “A genius always looks ahead, and has a different way of seeing things.” If Ducato customers can adopt that mindset this large BEV and others like it will help fill the 1.5 million vehicle expansion Fiat predicts by the end of the next decade.

As Europe’s bestselling large van, the battery-electric version of the Fiat Ducato (ahem) sparked a lot of interest!

But pause for a moment to think about where this van would be used. The Ducato is lauded for its high payload, which makes it one of the most bodied chassis around.

Fiat describes the van as “the most converter-friendly vehicle on the market”, but what about a battery-electric version of its most heralded and popular conversion, the camper van? Surely an electric camper would be an ideal fit? The popularity of EVs has soared in the retail sector with trailblazers like the Nissan Leaf, Renault Zoe and BMW’s i ranges prompting all manufacturers to launch EVs before the end of the decade.

Motorhomes should therefore be a no-brainer for battery-electric models, with the environmentally sensitive consumer ready to pay for a premium vehicle with an eco-friendly driveline. Well, not according to Fiat Professional’s European head of brand, Stephane Gigou. Despite the seemingly harmonious fit, Gigou says camper owners want to drive long distances and often into areas where electricity supply might be an issue. Fiat therefore predicts almost no interest in an electric chassis Ducato for motorhomes, something I personally wouldn’t have envisaged.