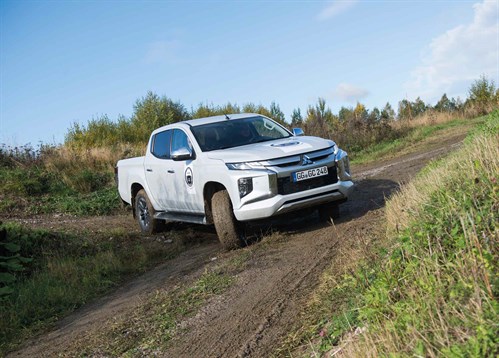 Mitsubishi has given its L200 model a tough-looking exterior makeover

(Continued from page 1) Mitsubishi has revamped the sixth-generation vehicle with a tough-looking exterior makeover and some improved driver safety systems. Its history, however, and the applications it is most often found in in the UK means it must not only look tough but be tough.

That’s why the new model has undergone more than 2,400 changes – not bad for what is, like the Ranger, essentially a facelift and new engine.

The most noticeable change is the new front that is every inch the archetypal macho pick-up. The major alteration is centred around the new headlight position, which is now 100mm higher. It sits a full 700mm from the ground, which not only helps strengthen the looks but more importantly improves visibility by bringing the lights above the wading-height depth. Side bodywork has also been redesigned and the rear end has undergone quite a transformation too, most noticeable is the new lighting cluster. Like the Ranger, the important and usable parts of the L200 remain completely unchanged.

Mechanically, there is a new six-speed automatic gearbox with high and low range, but there have also been improvements to the Super-Select 4WD system. It is now possible to select between specific terrain modes with Gravel, Mud & Snow, Sand and Rock settings.

Each of the modes alters the throttle response and traction systems to optimise the L200’s performance across the surfaces. The additional ratio on the automatic box is a welcome change that lowers both noise and fuel consumption while also improving the shifting smoothness. Bigger shock absorbers have been added to the rear suspension while the front end gets larger brakes that certainly get the job done.

The L200 has long been one of the rougher-riding vehicles in the segment with quite a bouncy rear-end but it is now much smoother. While far from perfect, it’s a big step forward over the current truck and one which puts it on a more even footing with its most obvious rivals the Nissan Navara and Toyota Hilux. Safety features have also been added, with a new 360° bird’s eye-view camera as well as blind spot warning detection system with lane-changing assist, forward collision prevention, brake assist and rear cross-traffic alert, which warns of any collision as you back out of a space.

Off-road it’s a tireless workhorse of a machine and its smaller width and shorter body make it much more manoeuvrable than the Ranger. Its new hill-descent control system works differently to other manufacturers’ in that it will maintain the speed of your descent at whatever speed you are doing (providing it is less than 12mph). It is quick to react, smooth and very capable. It’s possibly the most accomplished in the business.

Then there’s the new engine, a new 2.3-litre turbodiesel producing 150hp and 400Nm that Mitsubishi says has similar performance to its old 2.5-litre unit. It’s based on the Outlander and ASX unit and as a result is a lot less agricultural than the outgoing model’s engine. It’s a huge step forward and when combined with the re-contoured front seats, which significantly improve comfort, and the new six-leaf rear springs (up from five), you can feel a real and significant sense of improvement in this new L200. 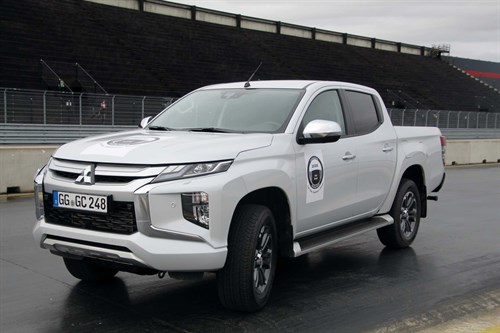