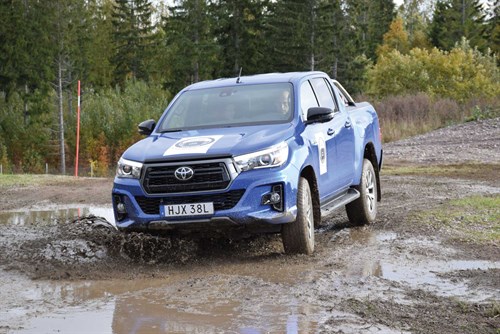 Of the vehicles here, the Hilux feels most at home over the off-road course

(Continued from page 3) A previous update to the Toyota Hilux that saw it arrive in Europe in time for the 2018 award means that the changes to the most recently revised Hilux are on the face of it less impressive than the competition – however, that doesn’t mean the Hilux is at a disadvantage.

Its updates for now are confined to a raft of new safety equipment that includes autonomous braking, adaptive cruise control, lane departure warning with corrective braking, and road sign-assist. There are also minor tweaks to the exterior with a new grey look possible on the range-topping Invincible X models.

Power comes from a 2.4-litre diesel engine that not only produces more power (148hp) than the previous 2.5-litre unit but also more torque than the 3.0-litre lump that was also removed from the range at the time. Toyota also upgraded the chassis strength and added 100mm larger leaf springs to help give a smoother ride.

Of all the vehicles in contention, it is the Hilux that feels most at home over the off-road course. The toughness Hilux trucks are famed for really does impart a feeling of security and capability. Nothing seems to phase it or its four-wheel drive system and it flies over every obstacle with a minimum of fuss.

On the road, the Hilux is also a match for the refined Ranger and doesn’t disappoint when compared to the excellent ride quality of the Nissan.

It’s a highly impressive all-round package and makes the Hilux’s position as the second best-selling pick-up truck in Europe an understandable one. It is probably not as complete a package as the Ranger, but the Hilux, along with the Mitsubishi L200, really shows how decades of experience can produce a truly excellent pick-up that is capable of working in all manner of terrains. 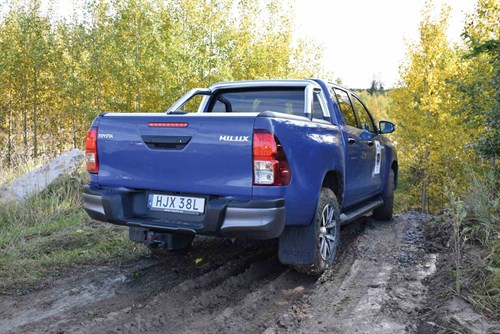 With such a strong line-up of competitors, picking a winner of the International Pick-Up Award is no easy task. The Nissan Navara is a former winner and has the best on-road driving manners of any of the contenders thanks to its multi-link rear suspension.

Toyota’s Hilux is not only a greatly improved version of the immensely popular truck, it is also arguably the best off-road performer of the group.

Then there are the two we would consider “all rounders” that, for the UK at least, are usually poles apart when it comes to what people buy.

Although the Mitsubishi L200 is available with all the gadgets and refinement you’ll find on a top-spec truck, it’s still not pushed itself into the same category as the Ford Ranger, which is not only the best-selling pick-up in the UK but also one of the ones most frequently bought as a top-spec model. Both are comfortable on-road and capable off-road but attract a different set of customers and operate at different price points.

As the two newest vehicles, both entering the market this year, they are arguably the ones to watch, but the differing requirements of the countries represented by the judges means that this is no forgone conclusion or even a two-way fight.

While the UK market’s ever-increasing demand for bigger, brasher, more car-like pick-ups must come into consideration when What Van? awards its point scores, other countries have far more utilitarian expectations of their pick-up trucks, and just because something is new and shiny won’t necessarily mean it will triumph.

The interesting part of testing so many pick-up trucks at once is taking a moment to stand back and realise just how fast the sector is evolving.

When I first got behind the wheel of a pick-up truck – a late Eighties-registered Hilux (the particularly square-looking kind that looking back reminds me of a cassette tape from around the same era) – it was a rough agricultural experience.

I vividly remember having to use two hands to yank the transfer box into four-wheel drive and can still picture the cracked windscreen, inch-thick mud-coated floor and dusty cloth seats.

Unquestionably tough – by the time I drove it, it had covered tens of thousands of miles on a commercial farm with no love or sympathy paid towards it – the Hilux I remember seems almost unrelated to the ‘same’ vehicles of three decades later, which are changing so fast that even a three-year-old model now feels old-hat. It seems hard to imagine these vehicles ever getting into such a dilapidated state as the first one I drove – although I’m sure they are more than capable of surviving the abuse – as the market has taken such a turn towards luxury.

Instead, it now feels just as important to judge these trucks based on their comfort, quality and desirability as it is their workhorse-like capabilities and durability.

Unlike the van award, which is annual with judging taking place throughout the year, the IPUA is biennial, and just before the voting deadline gathers together the most recently launched models for several days of thorough evaluation.

Any pick-up launched since the last award was announced is eligible and manufacturers are free to bring whatever model they think appropriate. The vehicles are driven on- and off-road, measured and evaluated, and put through a fuel-comparison evaluation.

Like the van award, joint-engineered products are judged together, unless there is sufficient reason to consider them separately – which in this case means the Navara and Alaskan are evaluated separately but scored as a single contender. Jury members can award a maximum of seven points to any one vehicle with a total of 12 points in their allocation – however, not all points have to be awarded. The winner will be announced at the Solutrans Commercial Vehicle Show on 20 November.