With low-emission zones popping up all over the UK, Rachel Boagey investigates whether the trend of purchasing vehicles outright is being replaced by a move towards leasing and rental. 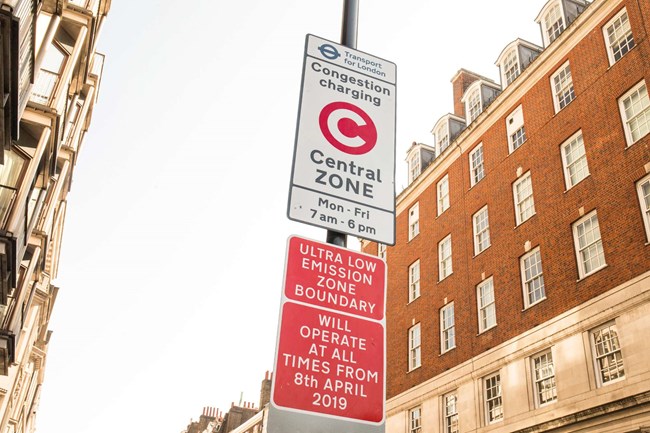 If you’re a van driver or commercial fleet manager based in the UK you likely know all about the Ultra Low Emission Zones (ULEZ) that have recently been introduced in London.

Separate from the congestion charge, which continues in place, the city’s ULEZ is being introduced due to local pollution issues created by transportation.

And it’s not just London which is busy introducing these zones, as many other cities have or will be introducing them, including Glasgow, Birmingham, Leeds and Sheffield. Non-compliant vans in the London Ultra Low Emission Zone are liable to a charge of £12.50 and the costs can quickly add up for operators who have more vehicles in the area at the same time.

With changing government policy dictating acquisition methods for many fleets, it’s clear that outright purchase is becoming less popular as legislation such as the 2040 petrol and diesel ban, plus Clean Air Zones (CAZs) and ULEZs come into force.

With the introduction of these zones, Transport for London has recently suggested that operators near London and other places introducing them should consider getting rid of their older vans and just leasing new ones when they need to go into the zones.

Russ Boulton, LCV Consultant for ALD Automotive, says that businesses running vehicles that don’t meet the Euro6 standard will be affected by the emission zone charges, some by both the ULEZ as well as the Congestion Charge. “We are seeing interest from those companies in updating to the latest Euro specification to avoid those charges. Just two trips a week into the area affected can add almost £2,500 to the annual running costs of each vehicle. Daily visits will clearly become prohibitive.”

David Brennan, CEO at Nexus Vehicle Rental, also believes outright purchase is declining in popularity among fleets, due to the charges incurred by using the zones. “The low-emission zones could seriously impact the operational efficiency of logistics fleets using older vans in urban areas, and assurance on longer-term company car tax is needed,” he says. “As well as rapid depreciation in asset value, these emission charges are compounding the ability of businesses to plan for the long-term and many are currently reluctant to invest in vehicles.”

Andy Picton, chief commercial vehicle editor at consultancy firm Glass’s, agrees that outright purchase of LCVs is reducing, due to increases in attractive leasing deals from manufacturers and leasing companies.

“Using this route to renew LCVs and reduce emissions, businesses can futureproof operations for limited outlay,” he says.

Small numbers of businesses are leasing specific vehicles to enter the London ULEZ and it is likely that this will be the case for future CAZs, notes Picton. “However, in reality, for occasional business use of older vehicles in the ULEZ or CAZ today we see much of the charge passed directly to customers,” he says. “If entry to a ULEZ or CAZ becomes a regular occurrence, businesses are looking to invest in latest Euro6, pure-electric or hybrid technology to avoid the charges.”

With outright purchase looking like an uncertain option, rental is a rapid route for businesses to adopt the cleanest current Euro6 and alternative-fuel technologies and immediately alleviate the cost of emission zone charges.

Neil McCrossan, sales and marketing director at Northgate Vehicle Hire, says the move away from van ownership is something the company has been advocating for many years.

“Ownership works for some requirements, but even the most committed users of the ownership model recognise that the most efficient fleets contain a proportion of vans on a flexible hire product,” he says. “The majority of commercial vehicles in the UK are owned but increasingly operators are focusing on the financial, operational and environmental benefits of using newer, flexible vans on a blend of flex and minimum-term rentals.”

Rental is certainly becoming a more popular and sought-after solution as businesses realise the benefits that come with this form of accessing commercial vehicles, explains McCrossan.

Nexus’ Brennan tells us that rental is plugging the gap for fleets, as vehicles tend to be newer and more efficient, complying with strict new emissions regulations. “As CAZs are introduced, businesses can adopt more flexible travel solutions by using technology to keep costs low and to access mixed modes of transport for different journeys, whether this be through a van hire, a leased electric car or even a taxi.”

However, he does explain that these solutions may not always offer the most cost-effective option in the medium- and long-term, and for other journeys flexibility is key to cover periods when vehicles are needed to enter CAZs or ULEZs.

“Rather than investing in depreciating assets or being tied in to lease contracts, rental provides the flexibility to scale fleet capacity up or down when needed,” Brennan says.

Rental vehicles also tend to be newer and well maintained and any replacements can be sourced instantly, avoiding downtime. “More than 60 towns and cities across the UK are considering implementing some form of air quality control and rental means the right vans can be sourced when regulation comes into effect,” he adds.

Europcar’s director of commercial vehicles, Stuart Russell, tells us that vans that comply with CAZ regulations are essential for many businesses around the UK. However, the reality for many of these firms is that they do not want to invest the significant capital that a new van commands in a climate that is so uncertain.

“That’s why it seems rental is becoming an increasingly popular option for car and van fleets as it provides the option to scale capacity up or down quickly, depending on demand or according to market conditions or government policy. This allows businesses to reduce costs in the long-run as they are not tied into longer lease contracts,” he says.

Danny Glynn, MD of Enterprise Flex-E-Rent, agrees that rental is potentially a feasible solution to the current changing mobility climate for fleets. “The growth of CAZs is one of the factors driving businesses towards transport solutions that offer greater flexibility, both in terms of cost and emissions,” he says. “Rental is an effective way to fulfil that need. We’ve seen a number of fleets looking to rent Euro6-compliant vehicles to cover their operations in areas like London’s ULEZ because the vans they own are older.”

Research conducted by Europcar among businesses that use vans revealed that over a third of SMEs say that economic uncertainty is a transport issue that is set to impact their productivity in 2019. “With this in mind alongside changing emissions regulations, rental has a more important role to play than ever,” says Russell.

He has witnessed a clear demand from businesses for vehicles that feature the latest motoring technology and comply with the latest regulations. “However, what businesses don’t want is to tie up capital on a depreciating asset, particularly one that’s value is likely to decrease further if upcoming regulations mean these vehicles are no longer compliant,” he adds. “Rental provides businesses with access to the latest vehicles without this commitment and the convenience of a fixed monthly cost.”

Rental and leasing can help ensure fleets are modern, up-to-date and compliant with the latest emissions standards. “Rental is an increasingly popular option, with many companies looking to reliable, financially stable hire businesses. That will ensure they get the access to vehicles they need and the ongoing support, service and maintenance that is required.”

ALD’s Boulton tells us the benefits of leasing include budgeted costs, flexible options at the end of the contract period and a defined return/renewal date for their vehicles. “With leasing, customers have the option to revise their vehicle choice more frequently, allowing them to react more quickly to the latest, and changing, legislation,” he says.

However, the BVRLA has discovered business contract hires fell by 4% year-on-year (42% to 38%) from 2017 to 2018, which includes a small decline in the van leasing market. “This indicates that the leasing model may not be the best solution to CAZs,” explains Nexus’ Brennan, who feels rental is the best option. Although it could be said rental has been seen as a dirty word in previous years in the industry, Brennan feels it offers the most flexibility, “supporting all fleet needs and driving conditions while helping to mitigate some of the issues new legislation and economic uncertainty can cause.”

A benefit of rental is that Euro6-standard vehicles can be sourced specifically by rental providers at short notice to avoid daily charges without long-term financial commitment. “In fact, the majority of Euro6 vans (57%) and cars (92%) are used as rental vehicles, according to the BVRLA’s latest Car and Van Rental in the UK report,” says Brennan. “It is clear manufacturers are nonplussed about letting their vehicles enter the rental market.”

“And since the ULEZ has been implemented we have seen a 10% increase in van rentals in and around the zone, which undoubtedly is down to businesses not wanting to commit to long-term leasing or acquisition to ensure they are compliant,” he adds.

Russell Adams, commercial vehicle manager at Lex Autolease, tells us that it is important to note that alternativelyfuelled LCVs can access London’s ULEZ for free, and so can Euro4 petrol and Euro6 diesel vehicles. “In the short term at least, fleets won’t be penalised for using the latest, cleanest internal combustion engines in urban areas,” he says. “Similar rules are likely to apply in the forthcoming Clean Air Zones in other major cities across the country.”

With this in mind, Adams says businesses should remain focussed on getting the right vehicle, for the right job. “Alternatively fuelled LCVs present an opportunity to save money and reduce emissions, but they should only be introduced if they can fit seamlessly into existing operations. Where an alternatively fuelled LCV isn’t suitable, replacing older vans with a new diesel or petrol vehicle is the most practical option.”

While the move towards more short-term solutions may be more gradual than expected, many believe it’s vital for fleets to stay in tune with changing regulations to ensure they’re ready to make the move when necessary, and it’s clear that rented and leased vehicles will have a far bigger role to play for fleets going forward.

While McCrossan says the introduction of low-emission and CAZs has had a small impact so far, with many businesses still preferring to cover the charges for their high-polluting vehicles, the trend is ending towards rental and leasing. “There is a lot to be done from our side and by local governments to educate business owners on the benefits of getting access to vans through flexible rental, whether that is avoiding emission charges, freeing up capital for investment, increasing flexibility or minimising downtime.”