Our 2019 assessment of the top 10 manufacturers’ websites uncovers the highs and lows of the online world. Jack Carfrae reports from the information superhighway. 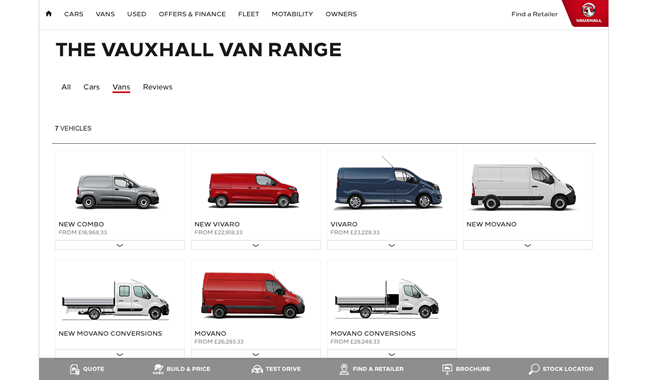 What Van?’s annual website analysis is now in its eighth year and the competition among the top 10 OEMs’ digital shop fronts is hotter than ever.

A new manufacturer has topped the pile by a minuscule margin of 3%, while mid-table performers received higher scores than the previous year.

As always, those that have charted the highest have tweaked, refined or completely overhauled their websites and demonstrated a solid approach to customer service via their remote channels.

A notable development is that the manufacturers with dedicated van brands are no longer clustered at the top.

Though its three-year reign as our favourite online light commercial vehicle brand has come to an end, Volkswagen Commercial Vehicles’ all-new website is a truly snazzy thing, and the firm has moved with the times by optimising it for mobile which, it told us, is the format by which it now receives the majority of its web traffic.

Mercedes-Benz Vans has also extensively revised its online presence and, after years of lacking one, now has a very good vehicle configurator.

Vauxhall went for the honing and polishing method rather than big changes, which worked in its favour, and proves that small, targeted revisions – including upping its game on social media – can make a big difference.

Ford was this year’s surprise, rising seven places from dead last to a podium finish, courtesy of top brochures, great extras and a general all-round improvement.

The yin to that yang was Fiat, which fell as many places as Ford gained. Although the Italian brand didn’t do anything especially badly, it made no changes to its site, proving that stagnation doesn’t wash online. Last-placed Nissan committed the same error, among others, and now appears very old hat.

We examined 10 key areas of manufacturers’ websites in September and scored each from one (lowest) to 10 (highest), then added the results to generate a percentage total. The more van-specific content and genuinely useful features geared towards operators, the more generous our scores, but we also placed a lot of emphasis on ease of navigation; it shouldn’t be difficult to find basic but important information on a major manufacturer’s site and we based part of our assessment on how easy it is to find the price of a popular model. OEMs that have made significant updates and improvements during the past year were also rewarded – less so those that have allowed their sites to stagnate. Our priorities for email and phone responses were speed, accuracy and helpfulness.

Last year, we reported that LCV manufacturers were better at live chat/instant messaging than at any point in our previous assessments. However, the same cannot be said of 2019, which heralded a reduction in the number of manufacturers offering the service and lower standards.

Ford has ceased offering live chat to UK customers. The facility still appears to exist – it’s tucked away on a back page of its site and can be found via a Google search – but it doesn’t work. After we attempted to kick off a chat, a message told us ‘our team is currently offline’.

The existence of Nissan’s service has been sporadic in the past – sometimes we’ve found it and it’s worked, sometimes not – but the top right of the homepage now has an obvious live chat tab. Click it, and a pop-up tells you its ‘representatives are unavailable to chat’, despite listing 8am to 8pm hours of operation (we tried it at around 2pm).

Renault, which has done live chat well in the past, was similarly poor. Our four attempts got us nothing more than a message saying its agents were busy and to try again later or phone the company.

None of the three aforementioned manufacturers’ press representatives could tell whether or not their live chat services were working.

Three of the four van manufacturers still offering instant messaging made a good job of it and got us an answer in less than five minutes. We asked each one our standard-issue question of whether or not a popular model is fitted with a bulkhead and the initial trio proved that – when they’re available and properly resourced – there’s plenty of worth in live chat from the customer’s perspective.

To read What's Van?'s detailed breakdown of how the brands got their scores, and the final league table, click the 'Website Review - Results' file in the 'Related Files' section at the top.