RACKING: Rack around the clock

(Continued from page 1) One of the biggest names in racking, Modul-System, rebranded from Tevo this year to bring the UK arm in line with its Swedish parent company. Its biggest customers have historically come from the utility sector, although more recently the group has seen consistent growth from leasing companies, small businesses, sole traders and logistics providers. It produces storage equipment that can be adapted to all shapes and sizes of LCV and its mission in 2019 is to raise the payload capacities of its customers’ vans through the use of lightweight materials. 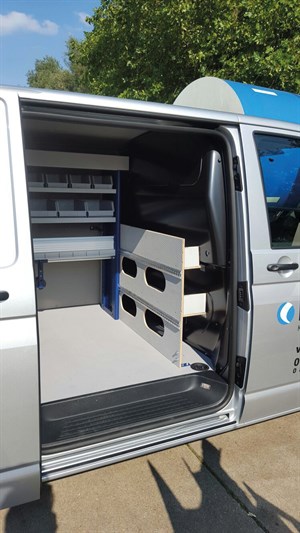 At the CV Show in April the firm launched a lightweight workbench based on the sandwich design of its Modul-Floor. It claims the workbench is 60% lighter than a wooden equivalent, weighing 7kg and offering a weight saving of 12kg on a 1.5m bench. Another addition to the range is a set of roof-mounted accessories, such as roof bars and pipe carriers, and there is also a Multi-Box that enables box stacking, plus a trolley to ease deliveries, which can be stowed within the racking.

Modul-System has also upgraded its Modul-Connect electrical system to enable van electrics and interior and exterior lighting to be operated by a smartphone or Bluetooth.

The firm claims it will reduce the amount of wiring needed and preserves the manufacturer’s warranty through limiting the need to drill holes in the bodywork.

Fellow Swedish company System Edstrom was accepted onto Ford’s Qualified Vehicle Modifier programme last year and has fitted out its vans with everything from shelving and racking to on-board power and sanitation kit.

Any van could benefit from a professionally fitted storage system

This year, the firm has produced a 100 amp-hour lithium-ion battery for use with electric vans. It can be used to power tools and can be recharged through a 230V port and also receives an average 8A trickle charge thanks to a roof-mounted solar panel. It demonstrated the battery at the CV Show in a Renault Kangoo Z.E.

Racking specialist Sortimo has introduced a new generation of its SR5 racking. It is supported by a single side profile at each end of a run of drawers and shelves rather than depending upon a framework. Sortimo claims this solution saves both weight and space.

VFS may be better known as a bodybuilder of dropsides, tippers and Lutons but it has now entered the racking market with a range of shelves and drawers made by Italy’s Baggio de Sordi, which are made from a mixture of high-strength steel and aluminium.

Meanwhile, storage and accessories supplier Rhino Products has augmented its portfolio with an aluminium van door ladder. It says clear, anodised aluminium side rails and glass-filled nylon rungs deliver weight savings of 50% compared to the rear door ladder it replaces. The new ladder is offered in six-, seven- and eight-rung configurations.

Rhino has also updated its PipeTube carrier with a new product PipeTube Pro. It comes with a full-length PVC lining that is designed to protect materials such as copper against oxidisation (rust). New nose cones improve aerodynamics and security due to the locking system being housed within the interior of the product. An O-ring seal protects against water entering the storage system.

Truckman made its name in hardtops for pick-up trucks, but having brought the Decked pull-out drawer storage system for pick-ups to the UK from the US two years ago it has now developed a version compatible with the Citroen Relay, Fiat Ducato, Peugeot Boxer and Ford Transit vans. It features two bed-length drawers, which roll out to provide access to tools and kit and can carry up to 100kg each, along with two integrated storage bins for smaller items. Made with high-density polyethylene, the product can hold up to 1,000kg on its raised deck, which is supported by a galvanised steel sub-frame.