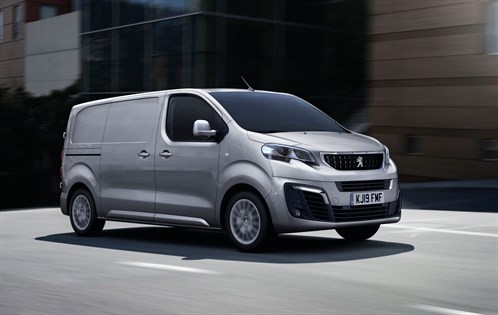 An electric version of the Expert is expected in 2020

(Continued from previous page) The Euro6.2 Expert now starts with a 100hp 1.5-litre diesel engine, having also discarded the 1.6, and other drivetrain options comprise 2.0-litre diesels with 120hp, 150hp and 180hp.

All come with a six-speed manual gearbox, except for the 180hp engine, which now has an eight-speed auto, replacing the six-speed auto previously on offer, and all the engines are fitted with stop/start technology.

There’s plenty of safety and driver assistance kit on offer and the flagship Asphalt version gets a Driver Assist Pack, with adaptive cruise control, distance alert and active safety brake, and a head-up display.

Although Neilson states “we have a relatively new product range”, this is not quite so true when it comes to the ageing Boxer, but Peugeot has recently given it a refresh with new powertrains and trim levels. It now gets a 2.2-litre diesel engine, offering 120hp, 140hp and 165hp.

As well as meeting the most recent emissions standard, these offer power rises over the previous 2.0-litre engines of 10hp, 10hp and 5hp, respectively. All of them come with stop/start and a six-speed manual gearbox.

The Boxer is now also up for grabs with the Grip (traction enhanced) and Asphalt (aimed at high-mileage users) specifications already introduced to the Partner and Expert vans.

Peugeot is attempting to up its game with Boxer-based conversions in its off-the-shelf Built for Business programme, which it started in January 2018. Neilson claims orders are up 21% year-on-year to 2,200, which equates to 37% of all Boxer sales.

“We control the converted products through approved convertor partners,” she says, and explains that dealers register details of conversion orders through an online portal monitored by Peugeot’s head office.

The PSA Group’s finance and leasing division Free2Move has added both Peugeot Built for Business and Citroen Ready to Run ranges to its finance lease portfolio. Peugeot Built for Business Boxer models offered by Free2Move include a dropside, with a payload of up to 1,431kg, and a box body, which has a payload of up to 1,015kg with a 16m3 body volume, while a dropside crew cab model is also available.

Neilson says Peugeot has always been a strong player in the corporate conversions market while admitting Citroen has historically tended to capture more small business trade through its Ready to Run scheme. Now, however, she believes there is a convergence between the two brands’ traditional strongholds.

“Without a shadow of doubt it’s beginning to change,” she says, and adds that more than a quarter of the sites in Peugeot’s dealer network are Business Centres able to work directly with local businesses. Neilson claims Peugeot has grown its sales to SMEs by 20% year-on-year.

“It’s indicative of where the brand is going and how focused we are,” she stresses.

Of Peugeot’s 180-strong retail network 53 are Business Centres and have the facilities to handle conversions.

These dealerships must employ a member of staff dedicated to business customers and must focus on aftersales and servicing as well as sales. They must also display demonstrator models and provide larger ramps for commercial vehicles.

“We’ve got coverage in all the cities and areas of opportunity,” Neilson says and claims one-in-five Peugeot van sales in the first quarter of 2019 was to a customer running a fleet of fewer than 50 vehicles.

Its four biggest urban hubs are in Manchester, Glasgow, Birmingham and Chiswick, London. The last of these belongs to the PSA Group-owned Robins and Day retailer, which operates 53 sites, mainly within the M25 loop surrounding London, and represents not only Peugeot and Citroen but also now Vauxhall, which PSA acquired in 2017.

Taken as a whole the PSA Group is obviously a force to be reckoned with but Neilson insists the individual components retain their identities.

“We have our own style,” she says, “customers see us as separate brands.”

Peugeot is on the up in the UK and with Vauxhall on board PSA now has an even bigger stake in the market. Despite the turbulent economic conditions caused by Brexit, Neilson maintains the group has “a comprehensive ‘no-deal’ contingency plan” in place covering HR, taxation, customs, logistics, production, regulations, the supply chain and IT.

Whatever the outcome she is confident that the group, and Peugeot in particular, can continue to operate effectively.