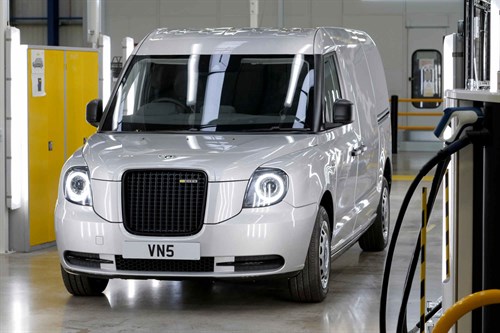 LEVC’s VN5 can be charged in under 30 minutes

(continued from page 1) When asked what Mitsubishi felt the advantages of the powertrain were over fully electric or conventional petrol or diesel LCVs, the firm’s general manager for fleet operations in the UK Clive Messenger says: “It very much depends on the needs of the business, but as public opinion is focused on protecting the environment more than ever, companies will increasingly want to switch to electrified vehicles.

“Unlike most passenger cars, however, LCVs don’t experience a lot of downtime so recharge times, not to mention the availability, speed and reliability of charging points, are still major barriers. PHEVs allow businesses to use a combination of electric and petrol for longer journeys, minimising downtime, while providing a zero-emission cost alternative in clean-air zones, which also saves on congestion/emission charges and the higher fuel consumption associated with city driving.

“Because the battery is smaller they can be charged relatively quickly too, so they can be topped up regularly to ensure they’re delivering genuine savings and greener deliveries.”
According to Messenger, the ability of PHEVs to cope with both short and long-range trips is part of their appeal.

“Research into electric commercial vehicle use in London indicated that they were covering on average 11 miles per day,” he says. “That’s well within the range of even a fully laden Outlander PHEV Commercial.

“But if that vehicle needs to deviate or go on a longer trip, an EV LCV will find that challenging whereas a PHEV can switch to hybrid mode outside of the clean-air zone and cover hundreds of miles with no range worries.”

When asked if Mitsubishi has any plug-in hybrid obsolescence concerns, Messenger says that in fact it sees PHEVs becoming more important than ever in the coming years.

“Despite the zero-emission announcements, transport CO2 emissions are actually rising as people move to petrol vehicles from diesels,” he says.

“The take-up of EVs is growing but not at the rate it needs to to meet future emissions targets. It will take time and significant investment before the public has absolute confidence in the charging infrastructure, and while EV range is improving, the costs and recharge times are still a major barrier.

“PHEVs have an important role to play in bridging the gap, helping build the commercial viability of the growing charging network, getting sceptical drivers familiar and comfortable with charging and electric driving, and keeping motorists moving when charge points are busy, slow or non-operational.”

Despite the new wave of hybrids, other manufacturers are standing firm on only pure-electric LCVs being the future. One of these is PSA Group – owner of Peugeot, Citroen and Vauxhall – which is particularly interesting given that the company is currently introducing high-profile PHEV models into its car ranges.

When asked why these different approaches were being taken between cars and LCVs, Marko Engel, the firm’s UK head of electric vehicles and infrastructure, explains that pure-electric vehicles will better fit the everyday usage requirements of the majority of its van customers.

He says: “Just like with passenger cars we have many different customers, all of which will have different uses and requirements for their vans. Some vans will travel a significant number of miles each day on the motorway whilst other vans are utilised for local last-mile deliveries.

“Operating a fully electric van will fit the everyday usage requirements for many customers and the van will always be zero CO2 and NOx emission at the tailpipe, allowing access to government purchase grants and any zero-emission zones.”

When asked if customers are becoming better informed about electric vans, Engel says: “Generally, yes, as is the population as a whole. Clearly, we as a manufacturer and the government have a role to play in that education piece, but we are gaining traction as more and more manufacturers begin to sell EVs.

“Attitudes towards electric vehicles do vary significantly and there is a steep learning curve in switching to electric vehicles – the fleets that we have seen manage this well have generally operated trials with a small group of vehicles first, so they can demonstrate the positive effect on their own business, as well as have driver advocates which can inform and influence others.”

According to Engel, PSA also has an answer to concerns that are regularly raised about manufacturing capacity for pure-electric vehicles: “Our entire business model has shifted to multi-energy platforms (same car/van – different drivetrains) as this gives us a far greater degree of flexibility in production (versus standalone electric vehicles) and we are confident that we can manufacture our planned volumes of electric vehicles.”

Dr Colin Herron, managing director of Zero Carbon Futures, is one industry figure who has concerns about production capacity for fully electric vans – although he does not necessarily think PHEVs will be the answer to this.

“Unless the main carmakers turn over whole van plants to PHEV or import hundreds of thousands then I am afraid no [they will not solve production problems].”

Herron also says that since PHEVs have both an internal combustion engine and an electric motor, they are expensive to build and maintain, while a pure-electric vehicle, once the battery cost is sorted, is simpler to build and incurs “almost no maintenance cost”.

When asked if hybrids are a good compromise for fleets worried about emissions but unwilling to commit to fully electric power, Herron says it is likely to come down to costs:
“I accept some companies are doing this out of social responsibility but for many it’s both image but [also] an accountancy exercise.

“If vans are going into a low-emission zone stating that a minimum distance can be achieved zero-emission (WLTP [Worldwide Harmonised Light Vehicle Test Procedure] and not NEDC – [New European Driving Cycle] – as it is meaningless) then a PHEV could do the job. If the vans are doing long-distance deliveries then, yes, a PHEV.If they are working in London within the ULEZ then PHEV-limited battery range may not be enough.”