It’s not easy being green: As new electric LCV sales gather pace, what is the effect on the used market? Ian Shaw takes a look 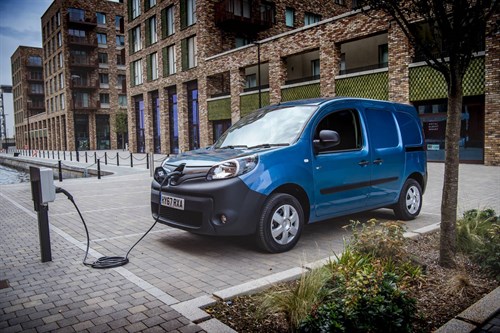 Over the past few years you cannot fail to have seen the gradual growth of the electric car, nor equally that the uptake of electric vans has trailed behind.

It would be fair to say that some of this is down to design. Most car makers are electrifying existing models – if you can place a motor where the engine and gearbox once lived and the batteries where the fuel tank was then all is well. However, most have a loss of boot space, and you cannot afford to lose space in a van. Weight is also a penalty, and payload suffers at the hands of battery mass.

Some makers have got around the issue. The Renault Master Z.E. has a large engine bay where once a substantial diesel engine and gearbox lived – by fitting both the motor and the battery there, the load bay is unaffected. The downside, though, is that the electric motor is the same as the much smaller Kangoo Z.E., reducing range and performance.

With electric LCVs (ELCVs) being more expensive than regular models, is going down the used van route a better way into electric motion? Firstly, maintenance is minimal: tyres are the only area with parity, brakes wear less due to regenerative braking, and there are no lubricants, timing belts, fuel system or main transmission parts to consider.

By contrast, the big unknown is battery life, and replacements cost about the same as a new engine and gearbox, although leasing systems are negating this aspect. So the biggest cost in running an electric van is the same as any other van: depreciation, which  depends on supply and demand.

Of the 60,000 plug-in vehicles sold in the UK in 2018 – the last full-year figures available – less than 1,000 were vans, with the Nissan eNV200 at almost 600 units and the Renault Kangoo Z.E. at just over 300 sales. Compared to electric cars, it’s a tiny figure. Full-electric, hybrid and alternative-fuel models took 2.5% of the new car sales but notched-up less than 0.3% of LCV sales. That meant an average three-year old electric van would be worth over 70% of its new price, with a diesel van in the same sector fetching a more expected 52%.

One proviso here is the operating pattern, with the electric LCV’s average mileage being only one-fifth of that of the diesel van.

Early adopters of ELCVs will see very little loss in the first three years with the promise of low running costs attracting used buyers, so now might be a good time to switch. As they inevitably become more popular the used values will reduce (but probably will not equalise for five years or more yet), although they cannot be affected by ever-changing emission laws, in the way diesel van residuals have.