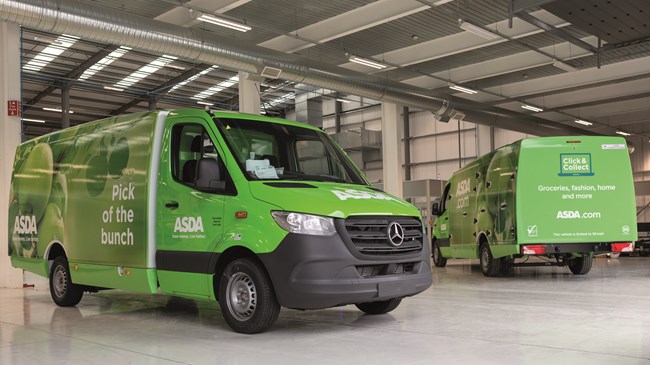 Aware that every kilo of payload counts so far as many light commercial operators are concerned, body builders are doing everything they can to cut the weight of their products.

In some cases that means resorting to materials not usually used in bodies, such as carbon fibre. That is the direction Coventry-based Penso has taken with its aerodynamically styled Blue Ocean Home Delivery Pods for refrigerated and dry freight fleets.

Designed to be mounted on 3.5t chassis, they employ material from 5,000 recycled plastic bottles in their structural core. The closed-cell foam sandwich panels used to construct them are wrapped with lightweight carbon fibre to prevent water ingress.

It is an approach that can boost the payload of a triple-compartment temperature-controlled body fitted to a 3.5-tonner delivering groceries by 47%, Penso contends. Payload capacity increases from an average 850kg to a much healthier 1,250kg

The pods can carry 140 totes – the plastic crates householders are becoming increasingly familiar with – apiece, compared with a typical home delivery body’s 110 to 120, says the firm.

Use a lightweight Penso e-Grocery Pod and your 3.5-tonner will return 34.1mpg on grocery work compared with a less-impressive 24.0mpg if you do not, states the manufacturer. Furthermore, the pods come with a 10-year structural warranty.

“Our e-Grocery Pod can deliver 2,500kg of products across two delivery cycles, versus three delivery cycles for the traditional bodies used in this sector,” says Penso managing director Daniel Hurcombe. “This allows fleets to reduce stem mileage [the mileage to and from a delivery zone], fuel and labour costs and emissions, making more efficient use of their capital expenditure.”

The ability to run 3.5-tonners that can deliver the same weight of goods in two journeys that a traditionally engineered vehicle delivers in three is bound to appeal to supermarkets. Twenty-five pods have just gone
into service with Asda on 3.5t medium-wheelbase Mercedes-Benz Sprinter chassis.

Penso is also producing a Luton body-style dry freight e-Delivery Pod for 3.5t applications using the same materials. It can offer 19m3 of cargo space and is said to be able to handle a payload of around 1,500kg compared with 900kg to 1,000kg for a conventional Luton.

Penso is not the only company that has made significant strides when it comes to increasing the payload capacity of temperature-controlled vehicles. Leicestershire’s Maxi-Low has come up with a low entry-height refrigerated body for chilled applications that it says can offer a payload capacity of up to 1,400kg on a 3.5t Sprinter chassis.

A big weight saving is not the only reason why some manufacturers use materials other than steel and aluminium.

They do not corrode, and their rigidity means that the way in which a four-wheel drive pick-up constantly flexes when it is used in rough off-road terrain will not cause them to crack and let in water, says Strongs sales and marketing manager Peter Anderson.

What is more, they will last a phenomenally long time, he contends: “Some of the bodies we’ve built are now more than 20 years old and they could last for 40, 50 or even 60 years.”

That means they should exceed the life of several vehicles and could potentially be reused several times.

“The bodies are self-supporting and don’t have to be constructed around a frame,” he continues. “They don’t  impose a weight penalty. I would describe them as weight-neutral.

“They are also eminently recyclable. Doing so requires 20-30% of the energy required to recycle aluminium.” 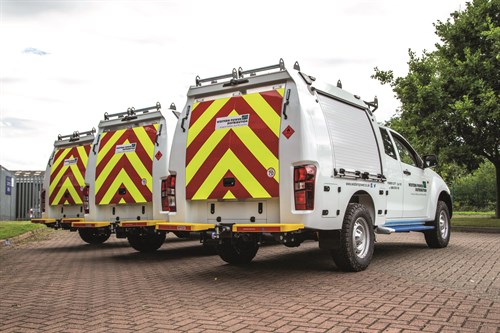 While employing different materials brings its advantages, they can come at a price.

Ease of repair can be an issue too.

“A lot of accident repair shops have got plastic welding equipment so getting minor damage to one of our bodies fixed shouldn’t be a problem,” says Anderson, and if it is dented then it may be possible to push the dent back out again, he adds. But he admits that if the damage is serious “then the body will have to come back to us”.

On the positive side, any vehicle fitted with one is likely to enjoy strong residual values, Anderson claims, and Strongs is looking at launching a mobile repair service.

Elsewhere, Bevan Group is developing dropside bodies with plastic sides plus a plastic tailboard and headboard. The floor and subframe are made from aluminium.

“They’ll carry a five-year warranty,” says sales director Roy Shelton. “They’re out on trial with customers at present and we’ll have them available early next year.

“We’re thinking about producing a tipper model too.”

Tipper bodies made partially or wholly from plastic have been constructed in the past – Strongs has built them – but they are not suitable for some types of work. They are unlikely to react well to hot asphalt, for example.

“So we won’t be using plastic to build an insulated version,” Shelton says.

“Something else we’re intending to do is introduce a very lightweight Luton body on a front-wheel drive Sprinter chassis, but we won’t have that available until next March,” he adds.

Bevan Group subsidiary En-Veco is assembling an 8m3 capacity electric van that uses Nissan’s e-NV200 as a platform under licence from Voltia of Slovakia. Able to handle a 580kg payload, it is attracting plenty of orders, says Shelton, and could be offered at a higher gross weight of 2.5t rather than the current 2.2t.

A lot can still be achieved with materials that are more familiar to body builders than plastic and carbon fibre.

Well-known for the home delivery bodies it constructs for Ocado among others, Paneltex still relies heavily on tried-and-tested glass-reinforced plastic (GRP) or fibreglass, says managing director Chris Berridge. Rather than switching to exotic materials, the Hull-based company is using detailed design modifications to take weight out of the 3.5-tonners it supplies.

The modifications have been made without compromising their toughness and durability, he stresses.

GRP panels can be repaired quickly and cheaply, Berridge points out. “Remember that home delivery vehicles pick up a lot of damage in service,” he observes.

“It is also worth noting incidentally that we too make use of recycled plastic bottles in our bodies,” he remarks. “We’ve been doing so for the past five or six years,” 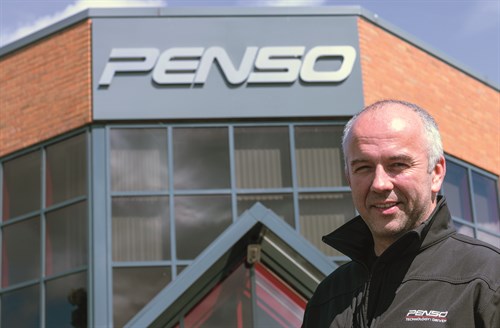 Fixing a damaged Penso body is not as difficult as it might appear to be at first sight, says managing director Daniel Hurcombe. “Repairing our panels is in many ways easier than trying to fix a metal or GRP body,” he contends.

Scratches, dings and dents can normally be dealt with using filler that is compatible with carbon fibre panels, he explains. It can then be flatted off and painted.

“Cracks in panels need to be assessed, photographed and reviewed with the Penso customer support team before a repair goes ahead,” he continues. “If there are no structural implications then carbon fibre repair patches supplied by Penso may be bonded onto the structure by a body shop, using supplied adhesive.”

If more serious damage is done by, for example, a driver reversing the van into a wall, then the panels may be removed using a hot air gun and scraper to separate the adhesive joints, says Hurcombe.

“With the damaged panels removed the joints can be cleaned up and abraded,” he says. “Penso will supply pre-primed replacement panels as part of a repair kit.

“Following a major accident, the box can be removed from the chassis and replaced by a spare,” he adds. “The work would be carried out by Penso.

“Carbon fibre is in any event much stronger than traditional materials,” he states. “And despite being lightweight, it is much more resistant to damage.” 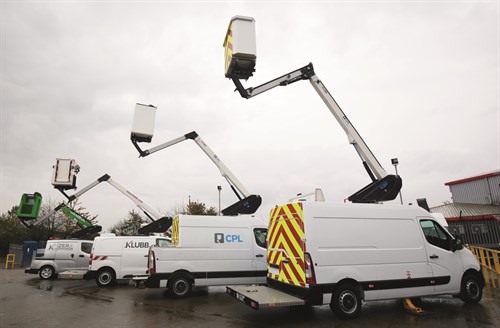 The versatility of LCV platforms is amply illustrated by what CPL – Cumberland Platforms Limited – manages to achieve by using them.

The business in Kettering, Northamptonshire, builds powered access platforms – sometimes known as cherry pickers – on vans, chassis cabs and 4x4 pick-ups. It can fit a suspension upgrade to pick-ups such as Toyota’s Hilux and Isuzu’s D-Max to raise their gross weight to 3.5t, thereby increasing their payload capability.

CPL regularly mounts it on a 3.5t Renault Master van. “We cut the back of the van away so the basket sits within the envelope of the vehicle,” says marketing manager Anna Ramsden.

The K26 has been designed in such a way that outriggers are not required, which makes it easier to set up. It also means that their weight is not eating into the vehicle’s payload capacity.

The 3.5t Master is favoured by CPL for its conversions because its unladen weight is comparatively low, says Ramsden.

“We fit a one-man basket with a 120kg safe working load, and the absence of outriggers gives the van a payload capacity of around 500kg depending on the customer’s specifications,” she continues. That allows it to carry extra equipment – tools, parts and so on.

“We also offer this conversion with a two-man basket with a 200kg safe working load and outriggers,” says Ramsden. “The payload would be approximately 400kg.”

Such a conversion will set you back around £45,000 depending on the options you select.

“We’ve now received full EU Type Approval on all of our Master conversions,” says Ramsden. That means time does not have to be spent obtaining Individual Vehicle Approvals, and the vehicle can be put to work quicker.