CONVERSIONS: On the home run

The coronavirus lockdown has triggered a spike in demand for light commercials equipped to carry out parcel deliveries, reports Steve Banner. 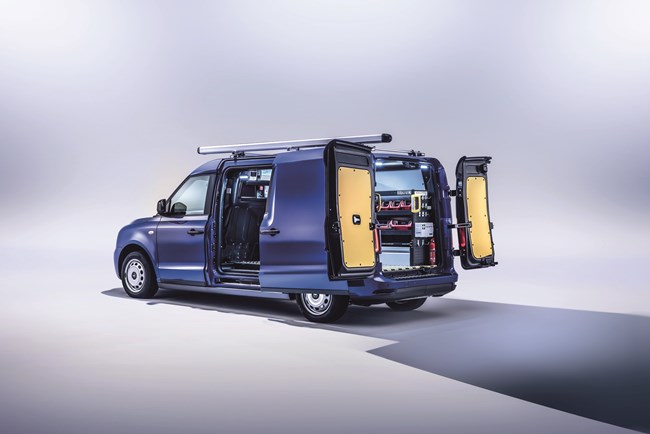 With home delivery skyrocketing thanks to the Covid-19 pandemic, load area racking specialists are increasingly developing conversions intended to make life easier for parcel van drivers and their employers.

Among those leading the charge is Modul-System, with a suite of products that should suit the 3.5-tonners regularly deployed on parcels work.

It has come up with parcel shelves under the Modul-Express banner made from ultra-high-strength steel, which can be folded back against the load area’s sides when not required. Gas-filled struts make the task easier, and the shelves have lips to help prevent packages from tumbling off while the vehicle is in motion. Restraint straps and netting are also available to keep them in place.

Each shelf can carry up to 120kg. Most parcels are not all that heavy – on average they tip the scales at around 6kg apiece, says Modul-System – but occasionally customers need to ship weightier items.

It has also developed a bulkhead with a centre sliding door so that the delivery driver can walk directly from the cab into the cargo compartment. Not having to climb out of the cab, open one of the cargo doors, then climb inside the load area to retrieve a package can save a driver 14 seconds per delivery, the Swedish company contends. That equates to just over 23 minutes if 100 drops are being made during an eight-hour shift – a significant reduction.

Stepping straight into the van’s load bay means the driver is not risking life and limb by stepping out into passing traffic Modul-System points out, and increases security because none of the vehicle’s exterior doors are unlocked in the process.

Drawbacks? Opt for a bulkhead with a door in it and the twin passenger seat that is typically fitted to 3.5-tonners will have to be taken out. If it isn’t, then the door will be inaccessible.

Specify a single passenger seat instead – often available as an option – when the van is first ordered and there may be enough room for the driver to get by. If that doesn’t work then the seat may have to be abandoned in favour of a bulkhead-mounted foldaway jump seat.

Removing the factory-fitted passenger seat saves weight. Made from an aluminium sandwich with a composite honeycomb core, the bulkhead itself is said to be up to 50% lighter than more traditionally engineered steel or aluminium partitions.

“Our entire parcel van conversion may weigh no more than from 80kg to 200kg depending on what the customer specifies,” says Modul-System’s UK business development manager, Jerry Lane.

Racking suppliers are continually trying to keep the weight of their products as low as possible without abandoning durability or making them too expensive. “I doubt that you could get them any lighter than the level we’ve achieved though,” Lane remarks.

Sortimo’s foldaway FlexRack shelves employ composite material, and its current generation of SR5 racking is supported by a single aluminium side profile at either end of each run of shelves plus lashing points embedded in Sortimo’s own floor. It is designed in this way to avoid the use of a complex support framework, which would add weight, occupy more space and take longer to install.

Sortimo insists that strength has not been sacrificed. Some of the drawers available can hold items weighing up to 100kg, it says.

A vehicle with a carefully designed storage system with designated slots for all the products it needs to carry is less likely to be overloaded than one that has its load area’s contents scattered all over the cargo bed. But even vans that are racked out can end up hauling too many kilos around, however, which is why Modul-Express has added an onboard weighing system to its portfolio. It monitors front and rear axle weights as well as the vehicle’s total weight, and has been installed in the new LEVC (London Electric Vehicle Company) VN5 range-extended 2.9t van (pictured). The data can be transmitted to an in-cab display, a smartphone or a tablet via Bluetooth.

If more people work from home then they are going to need a dependable internet connection. It is a point not lost on Openreach, which for some time has been busy installing fibre-optic cabling the length and breadth of Britain.

Bott has kitted out two of the company’s Ford Transits as mobile showcases. Openreach is using them to explain to the public how the cabling is installed and the benefits it brings.

The vans contain everything from a mock domestic living room complete with a television screen and a sound bar to an Openreach underground access box. The vehicles were designed to be sent out to public events, shows and schools, so Covid-19 has almost certainly placed restrictions on their deployment – limitations that will hopefully be lifted in the coming months.

At the same time Bott has been kitting out a compact panel van for 22 Degrees Air Conditioning. Before it opted for properly installed racking the Tamworth, Staffordshire-based air conditioning installation, commissioning and maintenance specialist had been transporting some of the parts and tools it needed in a collection of boxes and bread crates. Items ended up strewn around the van’s interior as a consequence.

So 22 Degrees turned to Bott’s Express-Fit operation. It can install a basic modular racking system in a day, Bott says, having received the order a week previously. In this case it fitted false decking with storage underneath along with products from Bott’s Modulo range, including removable cases and bins. “Providing a specific home for each piece of equipment allows 22 Degrees to carry everything in a secure and organised manner,” says a Bott spokesman.

The Modulo line-up includes frames into which shelves with adjustable dividers can be slotted, perforated end panels for the shelving units, restraint straps, and invaluable items such as first aid kits.

Other products that can be specified include an inverter for the load area’s electrical system, which turns DC into AC and allows a 12V DC vehicle battery to produce 230V AC mains power. Such systems can be used to charge power tools, and need to be installed professionally to avoid the risk of a short circuit triggering a fire.

Worth mentioning too in the current climate is the Eberspacher mini hand-wash unit with a hot water tap that Bott lists. The unit can be accompanied by soap and paper towel dispensers.

Racking companies found themselves involved in a variety of different projects earlier this year as the nationwide lockdown bit hard and van sales plummeted. Bott built and supplied sanitiser stations to a Cornish primary school while Van Guard constructed 102 metal housings for ventilators for Covid-19 patients in conjunction with fellow Exeter-based fabricator DMA-PHE.

Business is now returning to something closer to normal, however.

Pick-up hardtop manufacturer and supplier Truckman, for example, is seeing demand revive as light commercial registrations start to rise again. “We’re pleasantly surprised that sales have rebounded quickly to around 70% of their usual level at this time of year,” says executive chairman Mike Wheeler. “It’s a positive sign for the future.”