IVOTY ANALYSIS: A back seat (removal) driver for change 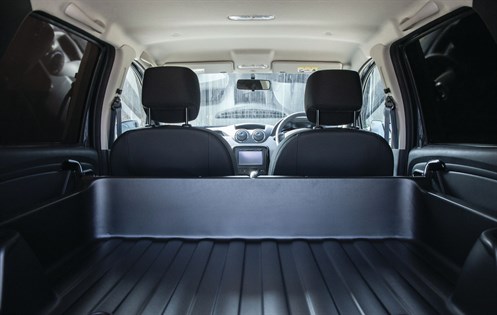 Small 4x4 options in the UK are rare, with Dacia currently not selling the Duster Commercial

(Continued from page 1) Nevertheless, models will likely have to be dropped or supplies limited in order to protect averages, with Suzuki confirming that the Jimny 4x4 “would adversely affect its whole-range CO2 average in Europe after 2020”. While Suzuki GB has confirmed that the Jimny will remain on sale in the UK in very limited numbers throughout 2020, its future beyond that looks in doubt – or at least as a passenger car.

Rumours are circulating that the popular off-roader could return as an N1 vehicle, in other words as a Jimny van with its rear seats removed. While the current lowest CO2 output in the Jimny range (154g/km) is still above the 147g/km target for LCVs, Suzuki might yet (with some revisions) be able to keep the Jimny on sale thanks to the more lenient targets for commercial vehicles.

Europe is already awash with cars converted to commercial vehicles, with Denmark, Norway and the Netherlands leading the way due to exceptionally high rates of taxation on passenger cars, which makes owning a car registered as a commercial vehicle a much more appealing proposition.

In 2019 a total of 33,000 commercial vehicles below 3.5 tonnes were sold in Denmark, of which approximately 5,000 were converted passenger cars. At nearly 15% of the market for light commercial vehicles and just under 3% of the passenger car market, it’s a healthy chunk of registrations for these N1 category cars designed and constructed for the carriage of goods. Similarly, in the slightly larger market of Norway, sales of these converted cars still amounted to 5% of all LCV registrations.

The market in the UK, according to statistics from the Society of Motor Manufacturers and Traders (SMMT), is, however, almost non-existent for small 4x4s, which accounted for just 1,620 sales during 2019 – a total market share of 0.4%.

Options within the UK market are slim, with the Ssangyong Korando and Rexton and Mitsubishi Outlander the main car-to-van crossover models. Mitsubishi also has the Shogun Sport Commercial, and Toyota sells a commercial vehicle version of its Land Cruiser, which are more traditional working vehicles that once proved popular in the segment but whose sales have been cannibalised by the pick-up market. Dacia briefly sold its Duster as a commercial vehicle, and it has yet to be replaced.

As pick-up trucks have gained market share, the market has also diversified with 4x4 vans becoming an increasingly common offering from manufacturers eager to provide customers with an option at small, medium and large van sizes.

Yet, despite the ever-changing landscape of light commercial vehicles, there is one car crossover commercial vehicle that continues to steadily sell: the Ford Fiesta van. Despite nearly being withdrawn from sale, Ford’s smallest commercial vehicle still shifts in significant enough numbers to keep it on sale – 2,200 were sold in 2019, no doubt bolstered by the fact that Vauxhall removed the Corsavan from the market.

As countries push for lower emissions, could the car-derived-van make a comeback? Alternative-fuelled vans are beginning to reach the market, but there are an increasing number of hybrid and electric passenger cars on sale too, and as taxation laws continue to reward green vehicles across Europe, will savvy buyers look to reduce their costs with green car-derived vans?

Since October 2019, alternative-fuelled vans have finally begun to outsell petrol light commercial vehicles. While their numbers have for a long time been exceptionally small, their continued decline and the ascendancy of electric and hybrid vehicles denotes a turning point in buying attitudes. Whether or not the UK will follow its northern European neighbours in taking to the commercial vehicle converted car remains to be seen, but expect an increasing number of cars to abandon their backseats (if only for the purpose of emissions regulations) and more alternatively fuelled cars to become ‘vans’.

Emissions fines: Manufacturers that breach their individual CO2 emissions targets will have to pay fines based on the amount they are over the limit multiplied by the number of cars they sold that year. The fine is currently set at €95 for every gramme over their limit. As an example of how the penalties work, the average UK CO2 emissions for new passenger cars in 2019 was 127.9g/km, with 2,311,140 cars registered. Applying the 95g target and €95 penalty, the UK (as a car manufacturer) would have to pay more than €7bn in fines were those figures to remain the same in 2021.

Comment: The end of a golden age for pick-ups?

Car-converted vans haven’t really taken off in the UK in the same way that they have in Europe due to one key factor: the pick-up truck. Our obsession with them puts us firmly as the biggest market in Europe, and although considerably behind the United States and Thailand, where pick-ups are ubiquitous if not mandatory, we’re still pretty exacting in our 4x4 requirements. Or at least I thought we were.

Big engine, high spec was often the way we regarded the sector in the UK and until recently I had little reason to question it – that was until rumours circulated that sales of the latest and greatest V6 pick-ups, like the Mercedes-Benz X-Class and Volkswagen Amarok, weren’t quite hitting the mark. Emission regulations like the European CAFE targets, a likely increase in VED rates targeting CO2 emissions as well as greater environmental awareness in general have all variously played their part in their downfall, but the fact remains that the Amarok and X-Class will cease to be by the end of this year.

Solace can, however, be found in that the Amarok will return in 2022 under the proposed collaboration with Ford. Cross your fingers that the VW V6 lives on in it too.