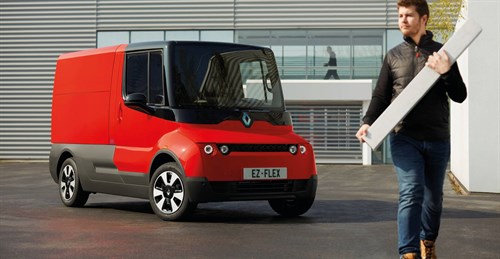 (Continued from page 1) But the traditional bonneted front might not be the right direction for alternatively-fuelled vehicle evolution. Prototype vehicles from Mercedes-Benz, Iveco and Renault have all hinted at their own take on the urban delivery vehicle, and while the bonnet does appear to be a feature, the real benefits of the vehicles seem to be in connectivity rather than the powerplant.

Assuming that cities will force operators and manufacturers to adopt cleaner technology, the competitive advantages to be gained will have to come through technology and telematics, with parcel or job tracking and downtime-reducing services now as much a part of the light commercial landscape as the vehicles themselves. Only by being more productive, it would seem, will businesses of the future be able to be more profitable and efficient.

The mass proliferation of smartphones has understandably led manufacturers to try to integrate them and other tablet devices into their vehicles from as early as the beginning of the past decade.

The humble phone holder was superseded by tablet holders, and the now nearly universal roll-out of Android Auto and Apple CarPlay in most new vans means smart devices are becoming intertwined with our vans. The challenge, however, is for manufacturers to interconnect the smartphone and the van with their tracking, their fleet management systems and job sheets.

Automating drivers as we currently know them could lead to smarter and better practices should autonomous or drone vehicles become a reality.

This next decade will undoubtedly present many new innovations far greater than the steps of the last, but what could be holding the light commercial vehicle sector back? And how far will the LCV industry likely have advanced by 2030?

Legislation will likely be the largest hurdle to overcome during these next 10 years.

Autonomous vehicles will need permits to operate on open roads, robots will need access to pavements, and drones will use our airspace. The challenges from a safety standpoint as well as one of insurance will likely be far more complicated than introducing the technology itself. Alternatively-fuelled vehicles also require infrastructure, an argument that has been put forward for years and one which PSA chairman Carlos Tavares highlighted last year when he said that in order to achieve the political goals laid out by cities across the world no less than 725 new charging stations must be built every day to reach the required 2.8 million these governments have set out to realise by 2030.

While pressure to adopt new technologies that are cleaner and greener is ever more apparent, there is also the issue of social acceptance of these vehicles. Most people accept that electric vehicles are necessary in order to achieve our global ambitions of reducing pollution – however, were these aims to impact upon their daily lives they might think differently. Limited range and the inflexibility of having to charge (sometimes for hours at a time) are two such barriers to acceptance. There is, though, one major overriding principle that will likely determine the success and direction of our light commercial vehicles over the next decade. That factor is, of course, the cost.

Being able to foresee a return on investment for these future vehicles will be the deciding factor in the uptake speed, or indeed success, of these future vans. The internal combustion engine (ICE) has proven itself to be the most effective and cost-efficient mode of transport. While removing the driver could ultimately produce a significant cost saving, that still seems unlikely. Vehicles of the future will instead have to compete on a much more even playing field with ICE vans, which somehow seems unlikely even over these next 10 years.

For a greater insight into the trends of the past year visit the IVOTY website (van-of-the-year.com/?p=1195) and download The Evolution of the Light Commercial Vehicle in the Urban Environment white paper for free.

I’ve just lost five hours of my life looking into the wormhole that is the future costs WLTP (Worldwide Harmonised Light Vehicle Test Procedure) will mean for van owners. Light vans have been tested under WLTP rules since September 2017 and heavier light commercials have been tested under WLTP since September last year, but it’s the tax changes – delayed from April this year – to April 2021 that will have the biggest impact.

The carrot and stick approach to VED being adopted may well push you more quickly towards some of the technologies mentioned opposite, with full-electric vehicles, hybrids and fuel cells (for now) meaning you’ll likely avoid the up to £2,000 charge for vehicles with emissions of more than 225g/km.

An additional consequence of this new tax banding might also be a decline in pick-up truck sales. The hugely inflated figures the UK market sees for trucks like the Ford Ranger and Volkswagen Amarok are in part attributable to its generous tax breaks, but as most fly well above the upper CO2 limit, suddenly an eight-fold increase in road tax will have a dramatic effect.