IVOTY ANALYSIS: Mercedes-Benz Vans starts to get over its X 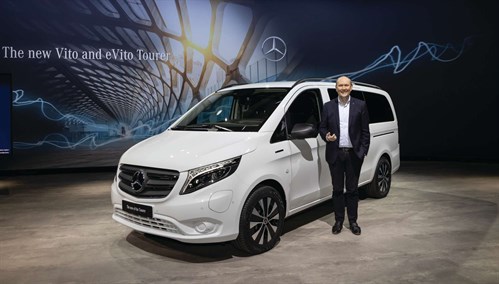 Breitschwerdt says that Mercedes has ‘an overall electrification strategy’

(Continued from page 1) Breitschwerdt wouldn’t say exactly how much the X-Class adventure cost Mercedes, but investment in products and the need to speed up its electrification strategy likely played a part in the enormous losses for the year, although the brand continued to sell well and recorded a seventh consecutive year of record sales, with almost 440,000 units sold worldwide.

“We face many challenges and had to adjust our strategy last year,” Breitschwerdt says. “[There are] more rigid emission regulations – it’s the right thing to do – and we follow and have an overall electrification strategy for our portfolio, not only offering electric vans, but customised and more comprehensive solutions to help customers meet challenges in the best way possible.

“We had, in terms of sales, our best year ever and sold 440k units, up 4%, and a very strong performance in the US and good results in Europe. The beginning of the year has been encouraging. What is happening now with the current influence of the virus certainly is not fully predictable and it is too early to say what impact it will have on the year.”

Regardless of the effect of the pandemic, curbing losses may not prove easy in a sector where competitors are increasingly looking to merge or cooperate in order to spread the enormous costs of development for both cleaner diesel engines and future powertrains. Ford and Volkswagen are exploring a cooperation agreement, and PSA has tabled a bid for Fiat-Chrysler, creating two of the largest partnerships in the automotive landscape.

Mercedes, in contrast, has very few partnerships, with its Citan currently being the only shared product. That relationship with Renault is set to continue with the new model, when both combustion engine and electric-powered versions of the van will be produced.

Nevertheless, Breitschwerdt believes the business is in a strong position: “We are in strong cooperation. We are cooperating with Mercedes-Benz passenger cars and trucks. We can use the shelf [of parts] to the full degree, and we are cooperating on an ongoing basis with Renault for the next-generation Citan. We will have to wait and see what other manufacturers announce, but I think it’s okay to state that everybody looks around, and as with passenger cars and the industry as a whole we will take from time to time decisions whether to cooperate.”

While being typically tight-lipped about the future of Mercedes and its products, working with another manufacturer to share intellectual property or products remains an option, although Breitschwerdt light-heartedly names some alternatives at our suggestion of a collaboration.

“I wouldn’t rule out even a collaboration with Rolls-Royce. It could be extremely nice. Aston Martin would be my favourite one – they have our engines and it would give me even more of a reason to be in the UK.”

Sometimes new models bring on big change, but the minor revisions to the new Vito suggest that Mercedes isn’t one for a radical re-invention. Despite the new eVito and eVito Tourer (pictured on the opposite page) representing an important milestone for Mercedes-Benz Vans as the company’s first all-electric model, it does feel like Mercedes is arriving quite late to the party, something which Marcus Breitschwerdt, head of vans, denies.

“We always said we would run a propulsion and drivetrain strategy that will be flexible, and have an ongoing look at the ecological needs,” he tells What Van?, while also referencing that the brand has worked on consumer advice and connectivity solutions for its customers.

Electric Sprinter vans are scheduled to launch later this year and a new Citan will have an electric powertrain, but while Mercedes’ passenger siblings have already launched an EQ sub-brand with separate models of its own for its electric offering, Breitschwerdt says there are no plans for the same in vans, with the ‘e’ models of Citan, Vito and Sprinter currently the only ones in the alternative-drivetrain pipeline.