LIVERY: The art of graphic illustrations 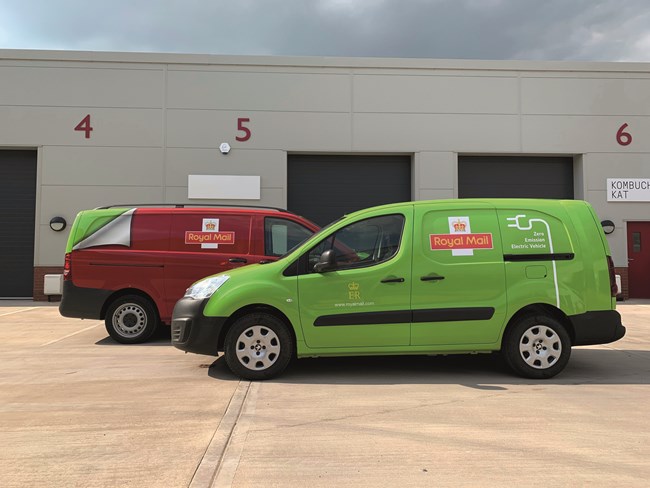 Long-known for having its vans completely finished in a familiar shade of red, Royal Mail has broken new ground with one of its latest batches of vehicles.

The 190 battery-powered Peugeot Partner Electrics and Mercedes-Benz eVitos it has acquired sport a cleverly designed livery, which makes it look as though the traditional red colour has been peeled back to show a striking shade of green underneath. The idea is to reveal their environmentally friendly credentials.

The livery has been applied by commercial vehicle graphics specialist Mediafleet at its site in Oxfordshire using WrapidCoat. A liquid spray-on vinyl said to be up to 30% cheaper than a vinyl wrap, it can be removed in half the time, claims Mediafleet managing director, Barnaby Smith.

“We can take large volumes of vans straight from the factory and colour-coat them at speed and to a standard that is indistinguishable from paint,” he states.

Conventionally applied vinyl remains popular, however, and can be enormously effective, says Lee White, head of livery specialist Graphics Depot. It can be used as the basis of a full or partial wrap, to carry images that illustrate the vehicle operator’s business activities, or to apply a name, address and company logo.

(The company is part of West Midlands-based Bevan Group, a well-known bodybuilder, whose En-Veco business unit is now assembling a version of Nissan’s electric e-NV200 van fitted with either a 6.0m3 or 8.0m3 body developed by Voltia of Slovakia.)

“Vinyl has evolved significantly over the past five or 10 years and is easier to apply than it used to be, especially when it comes to getting rid of air bubbles,” White says.

Graphics Depot uses polymeric vinyl if all the customer requires is something that will go onto a van’s flat body panels.

Pricier cast vinyl is deployed if a more complex design is specified that has to go in and out of all the recesses in the vehicle’s bodywork. That includes a wrap.

“You use a heat gun to help fix the vinyl into place, then heat it again once it’s there or it will pop out,” White says.

The van’s surface has to be cleaned thoroughly before the vinyl goes on. Graphics Depot will remove and later replace the door handles and any plastic trim if the design chosen and the application process makes this necessary.

All this suggests that while vinyl may have become easier to fit, a professional signwriter should still be enlisted to handle everything apart from the most basic jobs.

Simple graphics may take no more than an hour to put on. Opt for a complete wrap instead, and you can expect to lose the use of your van for one or possibly two days, says White.

Applying heat to vinyl makes life a lot easier when removal time rolls round too, and modern vinyls are easier to take off as well as to fit, he says: “If some of the more recently produced vinyls have been fitted then you can strip an entire van in no more than two or three hours, increasing to more like six hours if older vinyls have been used.”

A wrap will protect a van’s factory-applied paint finish and should leave it looking pristine once it is removed. If individual letters and logos have been applied direct to the body, however, then liberal use of a cutting compound may be required to remove the ghostly image they leave behind.

Vinyl is available in any and every colour you can think of including Pantone colours, which can make it easier to match a livery with a firm’s existing corporate identity. “What’s more, you can pick from a variety of metallic vinyls, vinyls with glitter in them and even vinyls that look like snakeskin,” White says.

Vinyl typically lasts for from five to seven years, and can survive the ravages of a revolving brush wash, he adds.

“Try to avoid using pressure washers though, and if you do, be careful and make sure you don’t hit the edge of any lettering,” he advises. You could loosen it.

White explains how much a really effective vinyl livery should cost: “If you want a van the size of a Vauxhall Movano completely wrapped and lettering and images included, then you’re probably looking at £1,600 to £1,700.” But if all you want is your name on the front, sides and rear, then the bill will be closer to £100.

The graphics industry is not short of ideas.

Leicestershire’s Roadvert offers lightweight, reusable graphics panels under the Spedian banner. They can be secured to a van using an industrial fastening system that does not leave a sticky residue behind, says the firm, and does not have be screwed or bolted into place.

The panels can be a medium for messages that may change during the course of the year, says Roadvert chief executive officer, Lawrence Craig. “A heating and ventilation engineer, for example, may want to promote new boilers in the winter, and new air-conditioning systems in the spring,” he comments.

Prices start at £395 for a package for a Ford Transit-sized panel van.

Roadvert has developed technology that enables a fleet to predict how many people will see the messages its vehicles bear along the routes they follow.

Available, too, is iRoadvert. Integrated into the Spedian frame, it can broadcast messages about the van operator’s products and services to smartphones and tablets.

Kent-based Inspace Media has come up with a patented system less than 1mm thick that enables graphics to be illuminated. A key benefit is its ability to make safety chevrons applied to the rear of a van more readily visible at night if it is parked at the roadside, says sales and business development director Alex Knowden.

All the driver needs to do to illuminate them is flick a switch in the cab, he says. They can be lit up continuously, or set to flash on and off.

The system can be used in other ways.

“If home deliveries are being made at night then it can be used to highlight a message that warns other drivers to slow down because a delivery is in progress,” he says. A light commercial can be fitted with a livery that lights up in its entirety he adds, or in sections.

The current draw from the van is minimal and the package has been tested at temperatures from -40°C to 120°C, remaining functional at both extremes, Knowden states. “It can flash for a minimum 20,000 hours, and we’ve got one in a laboratory in Belgium that’s been flashing for two years,” he adds.

No matter which approach you choose, the fact that vans are in effect mobile poster sites makes them invaluable as a means of promoting the operator’s products and services, says Mediafleet’s Smith. Industry research shows than a branded light commercial driving through a busy urban area could be seen by more than 3,000 people an hour, he points out.

The message it displays has to be an effective one however, he stresses. This means it has to be properly designed and be a good fit with the rest of the operator’s activities.

“A good vehicle graphics designer must understand a client’s marketing plan and recognise that any marketing message must fit with an overall brand strategy,” he observes. “Brand credibility is potentially the biggest gain van graphics can deliver, so the branding must be prominent and clear.”

Smith advocates the use of high-resolution images and bold colours and designs to help the vehicle stand out.

“Restrict the amount of text used and use clear fonts,” he advises. “Avoid complex educational messages as they will not be understood by pedestrians as vans whizz by them, and use a call to action if appropriate.

“Text response mechanisms are easily remembered, and can provide instant access to more complex messages by linking to external media such as a website or digital content,” he adds.

“Used correctly, all tools, including vehicle graphics, have a part to play in delivering a company’s brand message to its target audience.”

Fleet consultancy PVS Group advises caution when it comes to appointing a livery partner, arguing that cheap deals can end up being painfully expensive. Low-cost vinyl signwriting and wraps may turn out to be poorly applied and take too long to be fitted, it warns, and the chosen partner may take ages to replace the livery on a van that has been repaired after accident damage.

“Supplier capability within the UK livery market varies enormously, and exposes fleets to the risk of spiralling costs,” warns managing director Marcus Puddy. “So any savings at the time of quotation can be eroded very quickly.”