Computer intelligence could be coming to the rescue of light commercial fleet managers drowning in telematics data. 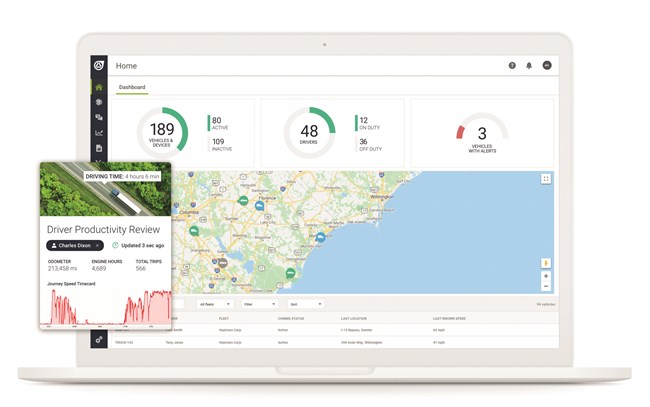 Artificial intelligence (AI) could be the secret to stopping fleets from being overwhelmed by the information from modern telematics systems, according to Teletrac Navman.

The telematics firm has placed AI at the heart of its latest system, the TN360, both to improve the data it gathers and to help fleets put the resulting data to good use.

When gathering data, the AI capability allows the system to, for instance, automatically pick up a driver using a mobile phone on an in-cab camera and flag it up, without the fleet manager having to manually monitor the footage themselves.

Then, when it is time for data to be analysed, the AI can answer natural commands like ‘show me my best driver’ – although all the data is still available to drill down into if fleets prefer.

The company says that this ability to view the background data is how fleets know they can trust the insights the AI provides.

As company president Jens Meggers told What Van?: “It’s transparent, and it shows you how it collected the data. It’s not this magic thing where you don’t know how it got there.”

The TN360 can use data from sensors, cameras, mobile and third-party applications – but does not need to use all of them.

Meggers explained how the technological progress of telematics systems, gathering more and more data from different sources as they developed over the years, created its own problems as the amount of available data piled up.

“Telematics has been around for a long time. Back in the 1980s it was modems and GPS tracking. Then we evolved this in the early 2000s and went into collecting more data, and the precision got higher, and we collected some basic data like fuel and odometer.

“What’s happening now is the demand on data collection and automation and making decisions
out of these technologies is exponentially higher than ever before. It’s not even close.

“Our customers rely 100% on the systems. They want to know as much as they can, they want to deploy as many sensors as they can, capture all the data, and want to make sense of the whole thing and optimise their entire business around it.”

For Meggers, part of the advantage of using AI is to make this huge pool of data widely accessible and useful, without users needing any specialist data expertise.

“We have the largest customers – there are maybe a couple that have a real data analyst who knows how to crunch data.

“[With the TN360] it should be as easy as a Google search. You should be able just to ask ‘where are my drivers?’ or ‘who is my best driver?’ and it should give you the answers and it should be very easy. We have created a natural language interface so you can talk to it, but it doesn’t matter if you talk or type.”

“When we brought in our camera technology, we found that the latest AI technology captures real 3D surroundings, like how close a vehicle is to the next one, how many traffic lights were passed, is the driver eating a hamburger or looking at a phone? So, you suddenly have a real view of the surroundings.”

The system is so advanced, head of product management and UX Sid Nair told What Van? that it can not only pick up on drivers doing something bad but also realise if there were extenuating circumstances for driving events such as harsh braking.

“For example, if [a driver] had hit the brakes hard, but it was really because someone had cut them off, we would be able to say actually it was a great save, you should reward that driver not penalise them.

“It will send an instant alert and also score you, so if you were on the phone and hit the brakes hard it will penalise you, but if you were driving cautiously and somebody cut you off and you saved an accident it will give you the bonus points.”