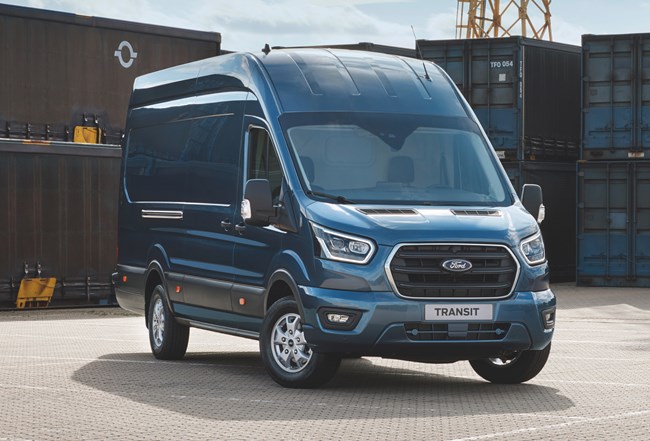 Ford is rolling out the 10-speed automatic transmission system already employed in the Ranger pick-up and Mustang performance sports car to its rear-wheel drive (RWD) Transits.

The move, which could be seen as long overdue, is clearly aimed at clawing back business from the leading supermarkets. Many of them have opted for automatic rear-wheel drive Mercedes-Benz Sprinters or Iveco Daily models for their home delivery fleets instead, and Ford has lost out as a consequence.

But the swing in favour of automatics for use on home delivery work should not be exaggerated, he insists. “Some fleets don’t want them because they recognise that a manual box can offer better fuel economy, although the difference between the two isn’t enormous these days,” he commented.

On the other hand, the residual values projected by the price guides tend to favour automatics, he admits. That could influence fleet decision makers and the rates charged by the leasing companies.

It will be a long time, if ever, before they outsell manual gearboxes in Ford Transits, though.

“Autos could account for 6% to 7% of total Transit sales,” said Brooks.

Having previously sampled the 10-speed auto in the Ranger Raptor, we were equally impressed with it in the big panel van.

We drove the 170hp 2.0 Ecoblue Transit Limited 350 medium-wheelbase 350 at the Millbrook Proving Ground in Bedford and found it to be equally at home on a variety of circuits. The consummately smooth auto makes the RWD Transit a gentle giant when adeptly negotiating urban conditions and it also handled impressively well when pushed hard on a high-speed circuit and a winding hill route, refusing to be bullied out of its comfort zone, with the transmission’s real-time adaptive shift scheduling consistently finding the right gear at the right time.

It does come with a hefty price tag, however, weighing in at just over £40,000, excluding VAT, which is more than £10K more than some of its front-wheel drive, manual stablemates, but in the same ballpark as the RWD automatic Mercedes Sprinters.

Ford offers the RWD auto Transit in models ranging from 3.5-4.6t and with single or dual rear-wheel options. As well as in panel van guise, it is available with chassis cab and minibus body styles.

Ford will also have a rear-wheel drive Transit 5.0-tonner on sale in the UK by the end of the year in both van and chassis cab guise, up from a previous 4.7t maximum.

The 5.0-tonner could appeal to firms that have decided that Transit 3.5-tonners can no longer offer the payload they need, and do not want to run overweight. Ford is now introducing an optional £1,500 on-board weighing system on the Transit and Transit Custom, says Brooks, that will warn the driver if the vehicle is overloaded.

Ford has already introduced a RWD Transit under the Transit Trail banner equipped with what it describes as Intelligent All Wheel Drive. It kicks in if grip is lost on a loose surface.

Aimed at construction companies, utilities and local authorities, the Trail is likely to account for a modest 1-2% of Transit volumes, Brooks predicts.

Going forward, the same system is to be offered in the Transit Connect.

Businesses such as utilities whose vehicles regularly work at the roadside after dark may find another option Ford is introducing useful: an illuminated panel that can be mounted on the rear of a van to warn other highway users of its presence.

Available in chilled and fully frozen guise, they are being produced in conjunction with Hull-based Paneltex. Customers who need to transport loads at both temperatures can order versions with twin compartments divided by a movable bulkhead.

Another newcomer to the One-Stop range is a Transit-based welfare light commercial designed for use by crews who may be working outdoors – laying pipelines, for example – some distance from their home base. Produced by Doncaster welfare vehicle specialist Clarks Vehicle Conversions, it offers cooking, washing and toilet facilities, and gives workers somewhere they can sit down and eat a hot meal in reasonable comfort.