James Dallas takes a look at some of the highlights that had been due to appear at the Commercial Vehicle Show at the NEC.

Market leader Ford intended to showcase the strength and diversity of its conversions at the CV Show, while also keeping a couple of surprises up its sleeve. The manufacturer was expected to highlight a new front-wheel drive Transit dedicated to heavier conversions, such as motorhomes, horseboxes and ambulances, and an extra-long low-height L5 skeletal chassis (pictured) ideal for distribution and removal work. A beefed-up Ranger conversion kit featuring an upgraded suspension to increase the truck’s gross vehicle mass (GVM) by 300kg to 3.5t and a Ranger chassis cab were also set to make appearances.

LEVC, the maker of the London taxi, was set be at the NEC in Birmingham for the first time to unveil its 1.0t plug-in hybrid-electric van, the VN5 (pictured below), which will come to market in the UK later this year.

Using the TX e-City taxi’s range-extender technology, the new van will be good for a claimed 80 miles (130km) of emissions-free driving plus an extended total range of more than 370 miles (600km). Its cab heritage has bequeathed the van a tight 10.1m turning circle, which should appeal to urban operators.

LEVC claims its van will boast best-in-class total cost of ownership (TCO), and its only direct rival on the market at the moment is arguably Ford’s Transit Custom PHEV, which has an electric-powered range of just 30 miles.

LEVC says that because the 1.5-litre petrol engine cuts in as a range-extender generator to charge the battery on the go once the electric power has depleted, the recharging downtime that is necessary for a plug-in battery is eliminated.

The company expects to start production at 10,000 units per year at its Coventry factory, but claims it has the capacity to increase this to 20,000, with 60% set for export. LEVC says its drivetrain technology has been tried and tested in more than 4,000 hybrid taxis it has produced since 2018. 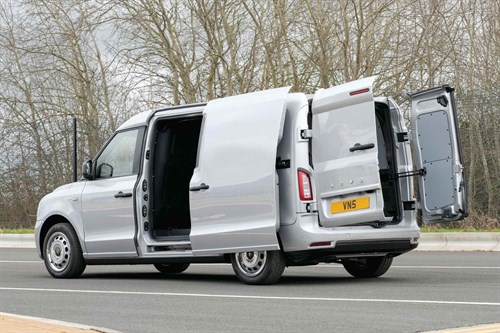