NEWS ANALYSIS: In for the long haul 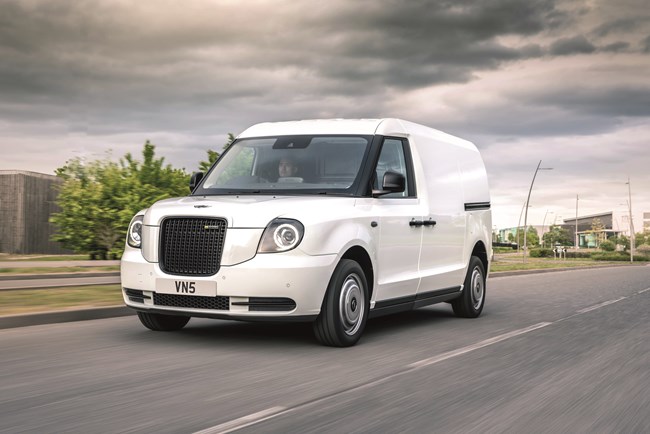 He concurred that battery-electric light commercials are fine for urban last-mile delivery runs, but added: “However, the vast majority of the journeys made by vehicles operated by logistics companies in particular are not solely within cities.”

That is why LEVC’s new British-built VN5 van should be able to steal a march on many of its competitors, he said.

Using the same range-extender technology as the company’s TX taxi, it has a range of 58 miles on zero-emission battery power, according to Drake-Lee. That increases to 300 miles when the newcomer’s petrol-powered  range-extending 60kW 1.5-litre generator kicks in.

“Let’s suppose you have to drive from Heathrow Airport to central London to make four deliveries,” Drake-Lee said. “That’s a round trip of 47 miles, much of it on the M4, with just 10 miles driven in the Ultra Low Emission Zone (ULEZ).

“The VN5 can do that run six times a day,” he claimed. “A battery-electric van of a similar size can’t because it doesn’t have the range.”

When the VN5 enters the ULEZ it can switch to battery power only, in line with zero-emission requirements. That means it gives operators the best of both worlds, he argued.

Grossing at 2.9t, the first VN5s should be delivered in November. Maximum gross payload is 830kg, and LEVC’s latest offering comes with a 5.5m3 load area. Even when the generator kicks in, the rear-wheel drive VN5 is always driven by its rear-mounted 110kW electric motor.

“All the vans have a 50kW DC charger and an 11kW AC charger fitted,” Drake-Lee explained. “A 22kW AC charger is optionally available too.”

A 400V/31kWh lithium-ion battery is installed and a full charge can take as little as 30 minutes, according to LEVC.

Prices will start at £46,500 excluding VAT and also excluding the government’s Plug-in-Van Grant. “It should qualify for the full £8,000,” Drake-Lee said.

Volvo Cars and LEVC are both owned by Chinese automotive giant Geely. Many of the components used in VN5 are also found in Volvo’s XC60 and XC90 cars, said Drake-Lee.

LEVC has also come up with the TX Shuttle. Using exactly the same technology as the TX and VN5, it is aimed at public transport operators that want to offer a demand-responsive ring-and-ride service.

A short test drive along dual-carriageways and also around roundabouts close to the manufacturer’s Warwickshire factory showed that the TX Shuttle offers rapid acceleration, rides and handles well, is well put together, and is, of course, remarkably quiet. The VN5 looks set to share these characteristics.