The company behind London’s taxi cabs is working hard to transform itself into a fully-fledged commercial vehicle maker. Illya Verpraet got an early look at its first van, the VN5. 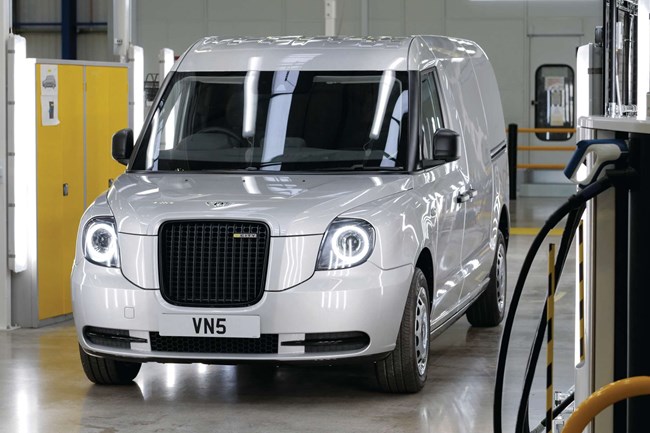 There has been a barrage of electric vans launched recently, and by and large their ranges are fairly disappointing – most of them around 100 miles.

Their makers claim this is fine for inner-city deliveries, but it’s hard to deny that range anxiety is real. LEVC, the maker of the TX London Taxi, claims it has the answer with its new VN5 1.0t van, which it aims to launch in the last quarter of this year.

Being based on the new black cab, the VN5 electric van hides a dirty secret: a petrol engine that kicks in when the 63 miles of electric power are depleted. LEVC would prefer if you didn’t think of it as a hybrid because the engine never actually drives the wheels – it acts as a generator to charge the battery while the 147hp electric motor ensures propulsion – but it could work as a good stepping stone for businesses who want to go electric, but still need that extra layer of security.

The drivetrain technology has certainly been proven so far in the more than 4,000 hybrid taxis produced since 2018. And while it may feel odd to buy a van from the former London Taxi Company, it’s an important move for the company, as CEO Joerg Hofmann explains: “This company, for most of its history, was a niche company for a niche market. The company was building, basically, taxis for London. A few cars were sent overseas, but only a few. This is a business model that is not sustainable; it’s why the company was always in financial trouble, and why in 2013 the company went into insolvency.”

Since then, the manufacturer has been bought by Chinese automotive giant Geely, which also owns Volvo Cars. Geely proceeded to invest £500m in the firm, which was renamed London Electric Vehicle Company (LEVC), signalling the intention to come out of its niche. That investment included a brand-new factory just outside Coventry with capacity for 20,000 vehicles per year.

Hofmann continues: “Last year, we had record sales of 2,500 TXs. We have to get out of this niche and get to substantial volume. For this year, we are quite confident that we can increase the volume by more than 50% again.”

To do that, the plan is to introduce new models, of which the VN5 is the first. The other part of the expansion strategy is to start exporting significant numbers of vehicles. Although the van is clearly linked to the London taxi, it’s intended to become a global product.

Currently, LEVC exports only 10% of its output, but it hopes to grow that to 60% by 2022. To that end, it has set up agents abroad, as well as an expanding UK dealer and service network.

The crucial part of the equation is, of course, building a good product – something that the quaint old London taxi arguably wasn’t. The new TX has been well received by drivers and operators and the hope is that this will extend to the van.

It should be versatile, at least. With a payload of 800kg, 5.0m3 of load capacity, over 2.4m of load length, and 1.12m between the wheel arches, the VN5 falls between the usual categories. It’s larger, with a higher payload, than the electric Peugeot Partner and Renault Kangoo, but it can’t match the Mercedes-Benz eVito, Maxus EV80 or Ford Transit Custom PHEV. It’s able to carry two euro-sized pallets and can be specced with a sliding door either side.

Its range should be its strong point. The Transit Custom PHEV, which uses the same range-extender concept as the VN5, manages only 35 miles on electric power before it needs to switch to petrol. The eVito can do 93 and the Peugeot Partner electric can do 106, but after that, it’s all over. Only the Kangoo manages 143 miles.

When it comes to charging, the VN5 is in a good place too, as it can rapid charge at 50kW, which only the Kangoo and Partner can do. It’s also compatible with both major charging standards: CCS Type 2 and CHAdeMO. LEVC claims this will top up the battery in just 30 minutes.

Further plus points should be the cab, which has a lot of Volvo-derived parts – including the Swedish brand’s excellent seats – and the availability of safety features not usually seen on vans, such as six airbags, automatic emergency braking, and lane departure warning, even if they won’t all be standard fits.

LEVC will only reveal prices at the beginning of April. So far, all we’re getting is that it will be “competitive” and that the VN5 will be cheaper than the TX taxi, which costs from £52,069 excluding VAT. LEVC is also confident the VN5 will qualify for the plug-in-van grant, which pays for 20% of the purchase price, up to a maximum of £8,000. 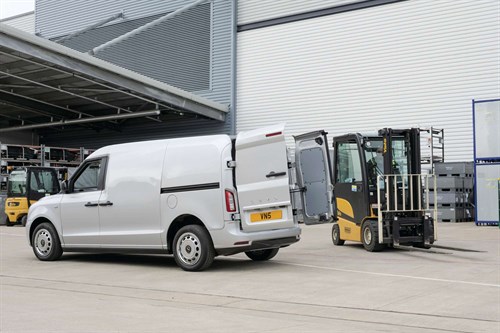