REMARKETING: Will there be calm after the storm?

The used van market has hit severe turbulence in the past few months. Tim Cattlin looks at how the remarketing industry has been affected, and asks if trade and retail buyer behaviour has changed. 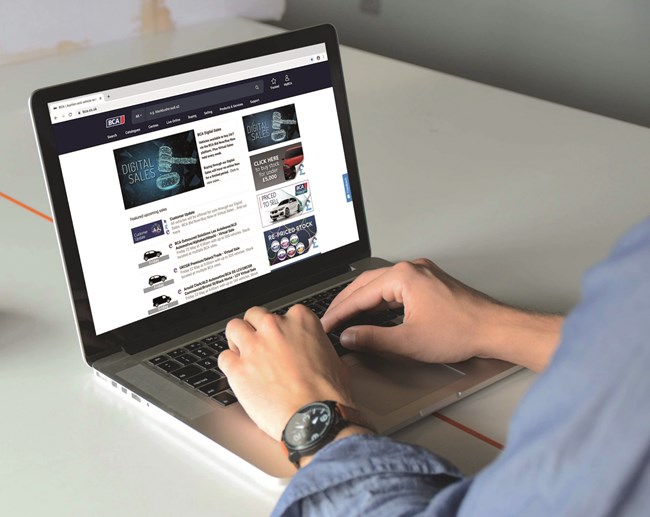 The effect of the coronavirus on all our lives is without precedent since the Second World War. Aside from the dreadful human cost, the government has warned that we are heading for a deep economic recession that could last for years to come.

The new van market has typically followed the GDP curve, and when the last recession hit in 2008 van registrations, together with the demand – and, as a consequence, values – for used vehicles went into freefall quickly.

So, where does this leave us now, in the summer of 2020? New vehicle sales are only just starting to flicker into life due to the closure of both factories and dealerships during the lockdown, but anecdotal evidence would seem to suggest there has been an unexpected boom in used van sales. Whether this is due to pent-up demand or the fact that small businesses have been able to secure grants under the government schemes and have decided to invest this in capital equipment remains to be seen. Dealers are reporting huge demand and are struggling to refill the forecourts with good, clean stock at reasonable prices. Although one large dealer was quoted as saying “I can’t sell empty spaces”, is there a danger that demand could quickly wane and that the trade will be left with some very expensive-looking stock? We asked those involved in the remarketing industry for their views.

Firstly, with regard to stock availability and the effect on prices, Steve Botfield, senior editor, commercial vehicles at Cap HPI, says: “There was sufficient sold stock in the system to fulfil the retail demand in the early weeks of the lockdown period. Post lockdown, the limited number of vehicles being defleeted in April, May and June has meant that certain stock is at a premium. Many of the wholesale outlets have had their staff on furlough, and the ability to sell stock was hindered. What we are seeing selling now is a catch-up on the stock that was on sites and in the logistics cycle.”

Shoreham Vehicle Auctions (SVA) managing director Alex Wright says: “There are a number of reasons for the crippling used van shortage. Fleets that planned to defleet vehicles during lockdown or in the summer months have postponed this because of replacement new vehicle build delays. Some fleets, meanwhile, have decided to extend contracts until they know more about what is happening with the economy, while SVA has even seen fleets claw back used vans destined for auction to put them back to work until replacement new vehicles arrive.”

Wright adds he hasn’t experienced a market like it in 30 years of working in the sector, but dealers have accepted they are all in the same boat and they must bid and buy in the current market or face their pitches being empty. “When you see a three-year-old Ford Transit with 50,000 miles on the clock booking at £9,100 and selling for £13,500 you know we are in a market that is extraordinary,” he says. “Some dealers were buying vans wholesale on a Tuesday for more money than they sold vans to a customer for on the Monday.”

Sam Watkins, chair of industry body the Vehicle Remarketing Association, concurs: “Defleet volumes from LCV operators are down somewhere between 20% and 40%. This is largely due to the supply chain for new vehicles being compromised by the effects of the coronavirus, so lead times are longer and existing vehicles are having their contracts or replacement cycles extended. This looks set to continue for a while – many manufacturers and their suppliers are reporting lower productivity due to social distancing measures in factories and elsewhere.” 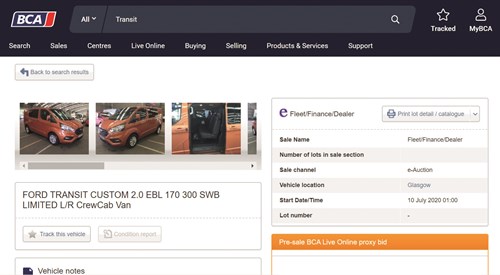 Commenting on a particularly busy few weeks, Stuart Pearson, BCA COO UK remarketing, says: “Buyer interest has been strong since the lockdown period started and has really accelerated in recent weeks. There is high demand across the board with particular strength in late-year, low-mileage vehicles, which have been in short supply. Conversions, average selling price, and performance against guide values at BCA all remain at high levels, with sold volumes rising and the number of buyers participating increasing significantly.”

Echoing this sentiment, Geoff Flood, Aston Barclay’s national LCV manager, has seen much the same: “The used LCVs sold at our Leeds auction over the past few weeks have been making 120%-plus of Cap Average, which is unheard of. All types of vans and chassis cabs have been finding homes – even a £3,000 van with £2,000 of damage sold above book. Some dealers have sold so many vans they have been left with just a handful on their forecourts. They need to buy stock and are having to pay the market prices otherwise risk trading with an empty forecourt.”

For the trade buyer who has been accustomed to his weekly trips to auction sites, or to online sales with a video feed, the past few months have been a little different, with all sites closed. With lockdown restrictions being eased and auctions being permitted to open from mid-June, are things getting a little easier? Andy Picton, chief commercial vehicle editor at Glass’s, thinks so: “Most auctions are continuing to sell stock via their online channels only at present. Most realise the constraints of social distancing, the movement of vehicles, and deep cleaning if the auction was to be held physically. The changes to the way auctions are now having to operate means though that they do not need to hold a vehicle physically at the site that it is being sold from. Stock is often held at multiple sites and offered in one sale. There are still vehicle collection issues, which are slowly being ironed out. This is to be expected, though.”

BCA’s Pearson says that the company had a clear position: “Currently, all sales remain online-only and we’re keeping close to the latest government guidance in order to protect our people, customers and suppliers. We’ll look to restart physical auctions when appropriate.”

Cap HPI’s Botfield sees little benefit from attending physical sales in the current climate: “Those that have opened physically have put stringent measures in place: strictly and severely limiting numbers, vans able to be viewed but not being driven through the auction lanes, social distancing and regular sanitising in place, and no restaurant facilities. Many buyers have themselves chosen to remain purely online.”

While pre-pandemic demand for vans was often typified by buyers fighting over clean, lower-mileage vans of all ages, has there been a change in recent weeks toward older vehicles? The VRA’s Watkins thinks so, but with a caveat: “In short, yes. That said, sub-24-month LCVs have always been scarce in the open wholesale market, so buyers choosing the nearest fit from the available stock is not necessarily a new development.”

Glass’s Picton concurs: “Certainly, following the easing of lockdown, there has definitely been a growing demand for lower-price-range stock. Anything clean and tidy with sensible miles has been eagerly snapped up.”

Steve Botfield, drilling deeper into Cap HPI data, suggests there has been little alteration in the age profile of vehicles being offered for sale through auction: “Analysing the research data in detail indicates that as a proportion of vehicle sales there have been no major changes to the ages of vehicles sold during the lockdown period, but just fewer in the market place to be sold.”

So, what does the future hold?

Aston Barclay says it “doesn’t know when the prices will stabilise, although late June has cooled down a little compared with the first few weeks of the month”. The company adds: “However, there is likely to be a shortage of used stock for a few more months to come as OEMs start to get production levels back to normal and fleets restart their replacement programmes again.”

“Some are running their businesses on a daily basis,” says SVA, “but currently there is no sign that the market situation is going to change anytime soon. We are all involved in a new passage in the used LCV market’s history.”