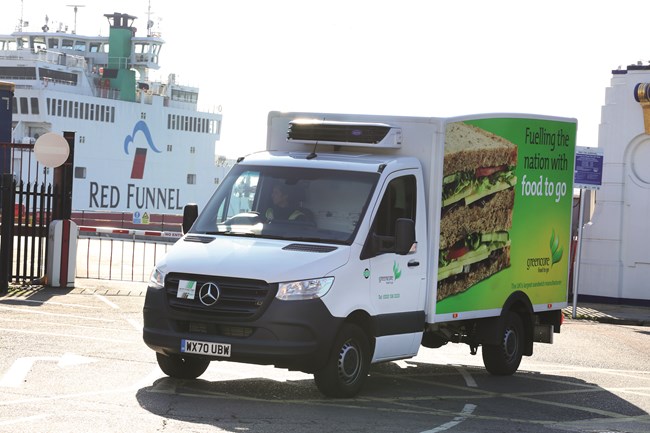 The slow but steady swing towards zero-emission battery power is resulting in major changes to the equipment fitted to temperature-controlled light commercials.

With no diesel engine to power them, direct-drive fridge units are being displaced by electric units. It is a change being embraced by specialist converters such as Coolvan, as well as the customers they serve.

To produce it, Coolvan has worked with refrigeration system specialist GAH to adapt its Le151C chiller unit to run off a 12v battery. The aim is to minimise the impact on eDeliver 3’s claimed 150-mile real-world range between recharges of its 52kW traction battery pack.

The van is designed to transport chilled loads. As a consequence, the fridge unit fitted will only deplete a fully charged 12v battery by a maximum of 8% during a typical working day, Coolvan contends.

The load area is insulated to a depth of 75mm to ensure the required temperature is maintained without the refrigeration system having to work overtime.

The presence of insulation, the vehicle’s weight and the weight of the fridge unit imposes limits on a refrigerated van’s carrying capacity. However, the short-wheelbase eDeliver3 can still offer a 3m3 cargo bay with an internal length of 1.9m and can handle a 745kg gross payload, says Coolvan – which adds up to a lot of sandwiches, pre-packed salads and yoghurts.

Constructing all-electric vans that can transport frozen products presents rather more of a challenge. It is one Mercedes-Benz has been addressing in Europe, however, in conjunction with temperature-controlled technology giant Thermo King.

Between them they have come up with the Mercedes eSprinter Pharma. Designed to handle local last-mile deliveries of pharmaceuticals at between -15ºC and -25ºC in urban areas, it is equipped with Thermo King’s electric E-200 fridge unit and a new lithium-
ion battery.

Not dependent on an engine, the electrically powered package keeps functioning even when the eSprinter Pharma is stationary during deliveries or while the driver is having a break, says Thermo King. That helps ensure the temperature in the load area remains constant – a vital consideration when pharmaceuticals are being transported.

Keeping vaccines at the right temperature when they are being distributed to vaccination centres has, of course, become particularly important during the Covid-19 pandemic.

There is nothing to prevent products such as the E-200 being fitted to diesel vans. Tesco has had it installed in 52 of its 3.5t vehicles deployed on home delivery work.

Unlike an engine-driven unit, the E-200 keeps humming away regardless, without the need for the driver to leave the van idling while a delivery is being made in order to keep it running. It can draw power from an auxiliary battery.

By varying the electricity flowing to the refrigeration unit, the inverter installed can provide more power when needed, resulting in a faster temperature pull-down when the cargo area is being pre-cooled prior to loading. By carefully controlling the power supply, the inverter is in charge of the unit’s motor speed and the exact cooling or heating capacity needed to maintain the temperature.

In some cases direct-drive systems are having to resort to battery back-up to keep functioning efficiently. Convenience food producer Greencore is now relying on such support during deliveries it makes to customers on the Isle of Wight.

When they take the ferry across to the island, the drivers of its refrigerated Mercedes Sprinter 3.5t vans are obliged to switch off their engines. That means their direct-drive Carrier Transicold Xarios 350 fridge units are turned off at the same time.

Ordinarily this poses no problem, as their insulated bodies built by Solomon Commercials can maintain the required temperature for the length of the crossing. In rough or foggy conditions, however, the ferry may remain at sea for hours waiting for a clear weather window, putting loads at risk.

To solve the problem Greencore enlisted the help of Petit Forestier, which supplies the firm’s van fleet on contract hire, and Carrier.

The latter brought in Clayton Power, which developed an autonomous 230v battery system capable of taking over and powering the unit for an extended period after the engine has been killed. So if the ferry is delayed by stormy weather in the Solent, the vehicle’s cargo will not suffer.

Housed beneath the passenger seat, the battery is recharged from the Sprinter’s alternator when the engine is running, or from mains power when the vehicle is plugged in on standby.

The package is proving to be a success and is now fitted to three of Greencore’s vehicles. Based at the firm’s Southampton depot, they make deliveries to the Isle of Wight and along the south coast.

“What we faced wasn’t a new problem and we’d been waiting for the technology to be available to provide a workable solution,” says Greencore network and transport director, Ben Martin. “What we’ve got now is fantastic.”

The business is using electrification of the fridge units to help determine the charging infrastructure it would need to progress to fully electric vehicles. “We’re now better able to understand how viable electric power could be across more of our fleet,” Martin says.

Maintaining a viable payload remains a constant battle for refrigerated body builders and conversion specialists, given the extent to which the weight of the base vehicles they use has risen over the years.

Isuzu Truck UK was especially pleased with itself when it unveiled a Grafter Green N35.125 3.5t van fitted with an 11ft fridge box body built by Paneltex, offering a payload capability of well over 900kg. The twin-compartment body features an insulated moveable bulkhead. 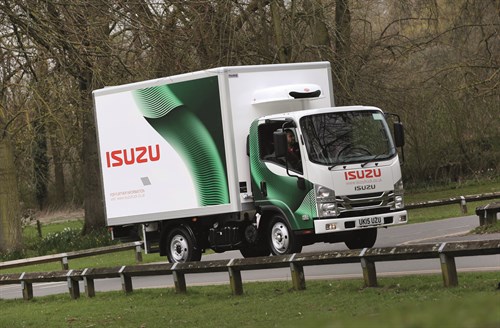 Capable of transporting loads of between -18ºC and 4ºC, it is equipped with a GAH SR351F direct-drive fridge system. Access to the load bay is by means of triple rear-insulated doors that open through 270º and a single nearside insulated door that opens through 180º.

“Isuzu has always had a strong presence in the temperature-controlled marketplace with its 7.5t-13.0t truck range,” says head of sales, Richard Waterworth.

“However, the launch of the lighter-weight Grafter Green has given us even greater potential in the local urban delivery market,” he adds.

Some body builders have concluded that the best way of improving payload is to take a somewhat different approach to the way in which bodies are constructed. Penso reports that it is using a blend of carbon fibre and recycled plastic to construct what it refers to as delivery pods that can boost the payload of a 3.5t van by almost 50%.

The pods can be tailored to transport a combination of ambient, chilled and frozen foods, and Asda has taken an initial order of 25.

If businesses want to carry temperature-controlled cargo from time to time, but do not want to acquire a refrigerated van, then they can always invest in a transportable refrigerated container.

Bluetooth connectivity enables users to set the temperature wirelessly and allows them to keep an eye on what’s happening with the container without having to open it. For added connectivity it comes with a temperature sensor that is compatible with Thermo King’s telematics systems.

Each insulated box has an integrated battery which offers at least 12 hours of cooling capacity, says the company, and can be recharged at any 115v or 230v AC power point.

ColdCube Connect Flex Pharma-certified models offer automatic cooling, freezing and heating with an internal temperature range of between -30ºC and 30ºC depending on the model chosen. This means they can be used to transport biomedical items such as blood bags and tubes, biological samples and vaccines; which gives them a key role to play given today’s challenging times.