Fuel cards can provide LCV operators with a wealth of information about their fleets as well as reduce costs. 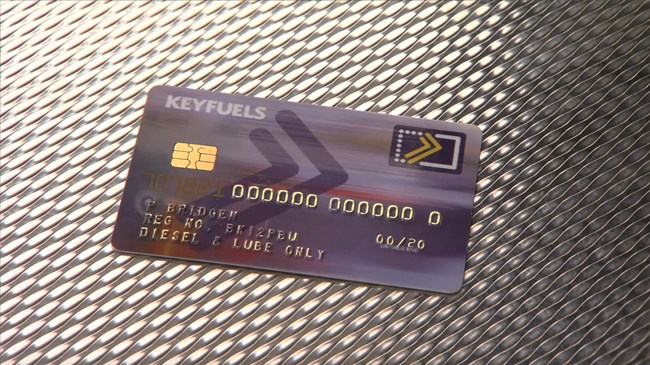 More and more van operators are using fuel cards to pay for the diesel they need to keep their vehicles running. So says Paul Holland, managing director of UK fuel at fuel card specialist FleetCor, which includes Keyfuels, Allstar and The Fuelcard Company in its portfolio.

“Penetration of the sector has increased quite significantly over the past two years,” he observes.

Why use a fuel card instead of a credit or debit card, or good old fashioned cash? Because of the significant savings that can be achieved, Holland replies.

“Over one-third of all UK fuel sites – that’s 3,300 locations – accept Keyfuels cards, and users pay anything from 2p to 5p a litre less than the pump price,” he states.

Allstar plastic is more widely accepted, and is welcome at over 90% of forecourts. “You’ll get a 2p a litre discount at around 1,500 of those sites, but you’ll pay the pump price at the rest,” Holland says.

If you pay the pump price, then where’s the benefit? Aside from the fact that using fuel cards gives a business an additional line of credit, Allstar can generate a raft of management information that can help light commercial operators keep their expenditure under tighter control, he points out.

The ability to obtain useful data is one of the biggest benefits of using fuel cards.

Businesses can see where their drivers obtained fuel, how many litres were drawn, which van they went into and how big the bill was.

Having these figures can help them work out fuel consumption and identify vans – and drivers – that appear to be particular thirsty.

Maybe a vehicle is less fuel-efficient than it should be, which means it may have to visit a workshop to see if there is anything wrong with it. A word or two with the manufacturer and the supplying dealer may be in order too.

Perhaps the driver has got a heavy right foot, and needs to be sent on a training course. Or diesel could be disappearing into jerry cans and ending up in the driver’s own car.

Steve Clarke, marketing manager at card provider Fleetmaxx Solutions, says: “One of the main reasons for using a fuel card is security.

“Unlike a credit card, it can only be used to pay for fuel, along with related items such as AdBlue and lubricants. It can’t be used to buy cigarettes or chocolate.”

The system that supports it will also home in on drivers with diesel vans who suddenly start buying petrol assuming the card allows them to do so. Where might that petrol be going?

Fleetmaxx’s portfolio includes cards that are valid at BP, Esso, Shell and Texaco sites, along with Keyfuels, UK Fuels and fuelGenie plastic.

The fuelGenie card is accepted at supermarket forecourts – noted for their comparatively low-cost diesel – operated by Tesco, Sainsbury’s and Morrisons. A fuelGenie smartphone app allows drivers to review prices and locations before they set off, and head for the nearest site that’s the cheapest.

If fleet managers can see which service stations charge the most for fuel from the data in front of them then they can instruct drivers not to use them. They can also see if a driver has drawn fuel from a forecourt that is way off their usual route – and ask why.

“With fuel cards you can limit the amount that can be spent and impose restrictions on the days and times that a card can be used: only from Monday to Friday for example, and not at weekends,” says Holland. That odd amount of diesel purchased on a Saturday morning might be going into somebody’s ride-on mower, after all.

Restrictions on the type of fuel that can be drawn can be laid down as well, and the consolidated fuel invoice that is provided makes VAT reclamation far easier than messing about with piles of paper receipts. CO2 figures can be obtained to give companies a better idea of their carbon footprint.

Fuel card suppliers charge businesses that use them a fee, but it’s a modest one, Holland insists. “It can range from a few pounds per year to a few pounds per month for each van you operate, depending on the size of your fleet and the volume of fuel you purchase,” he says.

One industry insider added: “Fuel card companies typically charge from £3.00 to £15.00 per annum for each card they issue and take a small margin on the fuel.”

That being said, major fleets may be able to negotiate better credit terms with their fuel card supplier.

A key advantage of many cards is that they offer users a fixed weekly price for their fuel that is valid wherever they buy it, making budgeting and managing cash flow much easier.

If Keyfuels or Allstar don’t meet your requirements, then you can always talk to The Fuelcard Company, Holland says. “It acts as a reseller for a number of major fuel cards, including those offered by Shell, Esso and Texaco.”

Any size of business can opt to use one of FleetCor’s cards, he adds. “We’re happy to deal with anybody, from a sole trader to the biggest courier fleet in the country, and it’s simple to open an account. You can do it online, or talk to our salespeople.”

What if you happen to be a start-up with no credit history?

Clarke has a solution: “Fleetmaxx is about to launch a prepaid card, which businesses in that situation can use.” They can switch to a conventional account once they have established a credit track record.

On the face of it, the slow but steady growth in the number of electric vans looks set to kill off fuel cards over the next few years. Not so, says Holland.

“Allstar has introduced the Allstar One Electric card, which is accepted by 10 electric vehicle charging networks,” he points out; that’s a total of 4,500 publicly accessible charging points.

The card helps businesses manage charging costs. “In some cases they can be really high, and can cost you more than putting fuel into an equivalent diesel van,” Holland warns.

Clarke adds: “Shell is installing charging points at its sites and you’ll be able to use a Shell card to pay for the electricity.

“FleetMaxx incidentally, is developing software that will benefit drivers who charge their employer’s electric vans at home,” he continues. It will separate out the cost of the electricity used and the bill will go to the fleet operator concerned.

FleetCor is increasing the coverage offered by its brands, Holland says. Earlier this year Keyfuels announced that it was renewing and expanding its partnership with motorway service area operator Moto, thereby adding 28 new sites to its network.

This means that Keyfuels cards are now accepted at all Moto forecourts and gives the card company more than 70% coverage of the entire motorway system.

Some fuel card providers are extending their activities beyond the provision of plastic.

Fleetmaxx can supply telematics systems and on-board safety cameras, while The Fuel Store has forged links with fleet management technology specialist Trackm8 to offer businesses using its cards a telematics package. The ability to track the whereabouts of drivers and monitor their behaviour can result in a 39% reduction in accident rates, a 35% cut in speeding and a 10% fall in insurance premium, the company contends.

The Fuel Store provides customers with Keyfuels cards and Esso cards, which are also accepted at BP and Shell forecourts.

Some fuel card suppliers are working with trade organisations in order to furnish their members with what they have to offer. Fleetmaxx has entered into a partnership with wholesalers’ buying group Confex to make its cards available to member companies.

Confex’s 200-plus members are able to purchase everything from breakfast cereal to wine from suppliers at specially negotiated competitive rates. The goods are then delivered to hospitality and retail outlets.

Thanks to Fleetmaxx, Confex members also get to enjoy preferential rates if they purchase AdBlue, or fuel in bulk. Fleetmaxx is owned by Oilfast, a bulk fuel, lubricant and AdBlue distributor.

Tom Chambers, Fleetmaxx business development manager, explains: “Our cards offer a typical saving of up to 10p a litre on national average pump prices and there is no account set-up fee for Confex members. Their cards are issued free of charge – a saving of £12 per card.”

Chambers advises businesses to investigate the charges levied by card suppliers carefully before they sign up and ensure they get complete clarity. Failure to do so could result in the unwary being saddled with a charge of £2.00 or more every time they refuel in some cases, he warns; and the unexpected extra annual bill could end up being substantial.