Green Analysis: The pitfalls and potential of electric vans unpicked

The government requires us to go electric by 2030, but how ready is the industry to do so? Guy Bird canvassed expert opinion to find out. 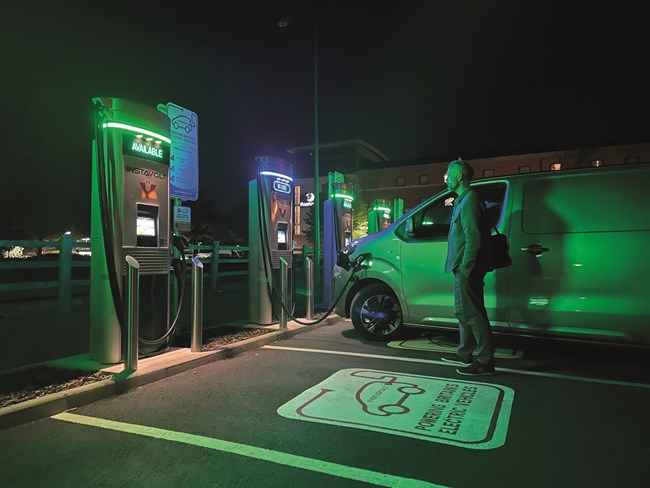 The UK government’s decision in November 2020 to bring forward a ban on selling petrol and diesel cars and vans by 10 years – from 2040 to 2030 – felt more significant for van operators than car fleets. This is because, simply put, the van industry is well behind the car industry in offering viable alternative powertrains.

There are now more than 20 full-electric vans available and a few plug-in hybrids, plus hydrogen fuel cell variants imminent for higher-mileage and larger load uses.

But making the switch to EVs isn’t just about the vehicles themselves. It’s about the infrastructure required to make them feasible workhorses. Given such complexity, when What Van? asked a selection of van makers, leasing experts and charging suppliers what the biggest hurdle to going electric by 2030 might be, the responses were varied. For Vauxhall LCV product manager Brad Miller, his brand is ready. As he points out, Vauxhall will have an entire range of battery-powered LCVs by Q4 of this year, but the broader industry is still lagging behind its carmaker colleagues.

Mike Potter, md at EV leasing experts DriveElectric, acknowledges as much: “The LCV market isn’t as mature as the electric car market. There are more gaps in the market – such as pick-ups – but as the market matures and the choice widens, this will aid take-up.”

Potter also mentions the thorny issue of the UK’s patchy and limited charging network, which will resonate with anyone who’s attempted to use an electric van in multiple regions up and down the country. The Competition and Markets Authority says the UK has about 25,000 charge points currently but says that various forecasts suggest more than ten times this number will be needed by 2030. “Public charging accounts for only a fraction of charging needs, but this fraction is higher for some van users, mostly delivery vans,” Potter explains. “Public charging needs to be rapid for van users and the good news is that this is improving dramatically with support from Ofgem, providing the high capacity connections required for motorway services and elsewhere,” he continued.

“Changes already in play to provide contactless payment on all new rapid chargers are making charging much easier too. A key change will come in the form of support for upgraded connections for workplaces and also a focus on near-to-home charging for rented property and communal residential parking. The addition of energy and load management software such as CrowdCharge can help minimise grid upgrades and deliver cheaper greener energy too.”

Charging point provider Instavolt is fully aware of the poor perception of the wider UK charging network, but is aiming to improve the situation quickly. “Issues of reliability and accessibility to EV charging points have been among the key barriers to entry for consumers and businesses,” says Instavolt’s CEO Adrian Keen. “But now, backed by a wave of private investment and against the backdrop of growing EV sales, charging networks throughout the UK are significantly scaling up operations. InstaVolt was the first network to introduce contactless payment in 2017 and is investing heavily to redefine reliability. However, the industry still has work to do, with other networks struggling to shake off the reputation of complicated access and poor reliability. By installing chargers in more convenient locations through national partnerships such as McDonald’s, Costa Coffee, KFC and others, InstaVolt has almost 700 chargers energised or in construction, and will have 5,000 by 2025.”

Despite this encouraging news, charging a van on unfamiliar routes can also be a minefield, as Matt Weston, Peugeot’s head of business sales, concedes: “Looking purely from an LCV fleet operator perspective, the flexibility of being able to charge quickly and effortlessly when away from home or depot at any of the growing number of public charge points, without having to install different apps and set up multiple accounts, is most beneficial to the adoption and use of electric LCVs. It should be as easy to recharge as it is to refuel.”

Which it isn’t right now. Still, Weston points out that Peugeot’s 75kWh battery e-Expert model has a 205-mile range (WLTP), comes as standard with a wallbox-friendly Mode 3 Type 2 cable and has pre-conditioning functionality via the MyPeugeot app to maximise vehicle range in use. And although a circa 200-mile range might not sound much by diesel-engined standards, Weston is quick to allay concerns. “Half of all vans in the UK stay within 15 miles of their base location on a typical day and only a small percentage travel over 100 miles,” he says. “Wallboxes and fast public charging solutions enable our customers to use their vehicles by day and charge them overnight, ensuring range anxiety is never a problem.”

With the government plans clear on petrol and diesel, demand for full-electric vans is significant. Weston admits that Peugeot’s lead times for electric LCVs are now into early 2022, but has a smaller e-Partner van launching later in 2021. Peugeot isn’t offering plug-in hybrid vans though. It’s a van-specific position mirrored by sister brand Vauxhall. “PHEVs do have a role to play in transitioning mainly passenger car drivers to a fully-electric vehicle in time,” says Vauxhall’s Miller, “but in terms of LCVs, most fleets are now in a position to move to a battery-electric vehicle, which, in many cases, will be more economical to run than a plug-in hybrid LCV.”

DriveElectric’s Potter isn’t a fan of PHEVs either. “Our mission is to help people get to net-zero emissions, therefore we don’t consider hybrids to be part of the solution, particularly considering that battery powertrains can already cover the majority of journeys and battery technology is due to improve further,” he says, before adding bluntly, “if anything, hybrids will delay the switch to zero tailpipe emissions.”

Ford is in favour of plug-in hybrid LCVs though, with a Transit Custom PHEV on sale for two years now. “For operators in and out of cities, but with vehicles either kept out of town or needing to make longer journeys, the PHEV has proved an ideal choice,” a UK spokesperson says. That PHEV’s combined 343 miles of range is certainly more than any existing full-electric LCV can offer, although deliveries of Ford’s full-electric E-Transit are due in the first half of 2022 to complement its electrified offering. Indeed, Ford’s whole van range will boast BEV and PHEV options by 2024 – two years ahead of its car line-up.

So big traditional van makers and players are galvanising, while all-electric start-ups like Arrival will soon expand the UK’s electric van parc. Arrival recently announced a 3,000-van deal with LeasePlan on the back of an existing 10,000-strong order for delivery service UPS, and is making much of its EV-only product and micro-factory manufacturing. With the great job title of VP of van, Arrival’s Patrick Bion comments: “Our micro-factories use local supply chains and talent and represent a revolutionary production method, with an 11-times smaller footprint, two-times reduced cost and six-times shorter commissioning than traditional van makers’ factories. It also means we can locate them nearer to areas of demand and cut our margins in the supply chain. We believe Arrival’s approach to making EVs, that are competitive in price with fossil fuel equivalents and with a significantly lower total cost of ownership, will be the inflection point for the adoption of electric LCVs – we will see demand skyrocket.” Production is due to start in 2022.

DriveElectric’s Potter believes that winning the hearts and minds of van drivers and operators are also important hurdles to overcome. “Some embrace the change, while others are more reluctant,” he says. “Education needs to reinforce the positive move to EVs that is required, through training and real-world action.” One example of that process in action for smaller operators is Nottingham City Council’s Electric Van Experience (EVE) programme, which allows smaller businesses to loan electric vans for up to 30 days to check they really can suit their needs in practice. Toyota, for one, has provided nine of its Proace Electric vans to the scheme, which has been funded by a £2.7m grant from Highways England.

But what about other broader factors, not least the dramatic impact of Covid-19 or, on a smaller scale, the government’s cut in plug-in vehicle grants in March 2021 (although grants of up to £6,000 are still available). “The uncertainty caused by the pandemic initially delayed many replacement cycles but we then saw an upturn in LCV and e-LCV ordering as consumers increased the transition to online retailing,” says Vauxhall’s Miller. “Electric LCVs were already ascending before the pandemic and that trend is showing no signs of slowing as time moves on. Businesses are even more aware of their environmental and social impacts as well as the strong total cost of ownership arguments for electric vehicles.”

And finally, can the whole industry really go fully-electric in under nine years? DriveElectric’s Potter thinks it’s feasible. “By 2030, there will be a mix of powertrains in UK LCV parc,” he concedes. “However, with the UK’s commitment to [combatting] climate change and the equation for businesses on running diesel versus electric clear, month-by-month the percentage of diesel power will fall and electric will increase. We see 100% LCV registrations easily achievable by 2030.”

Peugeot’s Weston is equally upbeat, adding: “The government has declared that its car and van fleet will be 100% zero-emission by 2027 and an increasing number of larger companies are starting to convert part or all of their van fleet to electric. With the cost parity between internal combustion engines and battery-electric vehicles reducing, we expect users to be considering switching before the end-of-sale date. The speed of this transition will be assisted by the rapidly-expanding charging network that is becoming more user-friendly.”

Hydrogen fuel cells have been cited as a promising future fuel technology for decades, but have never become mainstream due to real and perceived issues surrounding high development costs, storage safety and the lack of refuelling infrastructure. Yet that could all change as more experts acknowledge the maturing of its technology and the impracticalities of trying to decarbonise heavier forms of transport to meet climate change targets with battery-electric powertrains alone. Indeed, UK-based hydrogen powertrain and storage developer Viritech has just published its white paper on the subject: “If we want to decarbonise large vehicles, fuel cells are currently the only option. Large trucks are definitely beyond any foreseeable battery technology and even a 2.7t petrol SUV may well be too large for pure battery power – an electrified luxury SUV could end up technically an HGV with a weight of over 3.5t. Therefore, the issue is not whether hydrogen fuel cell vehicles are coming, it is how they are going to arrive.”

That means a strong use-case for large cars and vans to employ hydrogen, not just HGVs. “Hydrogen definitely has a future and Vauxhall has announced the Vivaro-e Hydrogen,” says Brad Miller, Vauxhall’s LCV product manager. “These are more suited to high-mileage usage patterns where refilling needs to be prompt (250 miles of range with a three-minute refill). Vauxhall is speaking to corporate fleets ahead of its UK launch from early 2023.” Not all of the experts we spoke to were as positive about hydrogen though, or not yet. “Currently hydrogen does not present a saving on running costs and the infrastructure for EVs is a decade ahead of hydrogen’s (at the very least),” cautions Mike Potter, MD of DriveElectric. “For the next 10-20 years we don’t anticipate any divergence away from EV take-up.” To some extent Viritech’s report agrees with Potter, saying in its report’s conclusion: “While batteries are the key growth industry of the early 2020s, hydrogen powertrains will be the key growth industry of the late 2020s.” You can argue about the timeline then, but it seems like hydrogen’s imminent advance is one to watch, especially for heavier and longer-range LCV use.