Some operations call for a specialist light commercial outside the usual range of conversions. 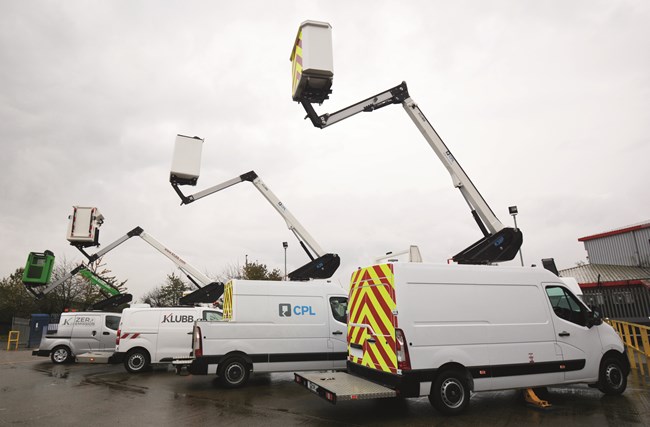 Businesses in search of a zero-emission light commercial available with a multiplicity of interchangeable specialist bodies could do worse than talk to Bradshaw Electric Vehicles. The Stibbington, Peterborough-based company distributes the battery-electric Goupil range of models in the UK – and they could turn out to be the most useful tools you’ve probably never heard of.

The latest addition to the French-made line-up is the G6. Grossing at 2.6t, it can handle a one-tonne-or-thereabouts payload and offers a range of up to 94 miles between battery recharges, which typically take around five hours.

It is left-hand-drive only – a right-hand-drive model is under consideration, but has yet to be introduced – but that is not necessarily a drawback, contends Bradshaw marketing manager Ramsy Labassi. “If you are using it on last-mile delivery work then the driver can step straight onto the pavement,” he points out.

It will gradually be made available with a range of bodies that mirror those offered on its smaller G4 stablemate.

You can order G4 bodied as a leaf collector with a vacuum hose that will suck leaves and other detritus out of the gutter and deposit them in a 2.15m3 cage body. G4 can be ordered as a pressure washer with either a 200l or a 500l capacity tank – just what you need if you are a council employee tasked with cleaning street furniture – and as a high-tip waste collector.

As its name may suggest, the tipper body has the ability to hinge itself upwards so that it can deposit its contents into a skip.

In mainland Europe, G4 is marketed by Iveco-owned Magirus as a 2.1t fire engine, which is deployed at BMW’s factories among other locations. Its features include the ability to smother a blaze with foam, thanks to an onboard compressed air system and a 300l reservoir.

“We’re involved in developing a fire engine based on the G4 for the UK,” Labassi says.

Bradshaw is working on equipping the high-tip body with a bin-lift – and there’s no reason why you can’t have your Goupil fitted with a lightweight crane, or a hydraulic hook lift.

On the positive side however, the company’s multifaceted approach and its interchangeable bodies mean that one vehicle platform can tackle a variety of different jobs depending on the time of year. Come winter for example, the leaf collector that was so busy in the autumn can be swapped for a gritter.

The electric power drawn by some of the equipment that can be installed – a pressure washer, for instance – can shorten the vehicle’s range. However, for many users this is not an issue, says Labassi.

“A Goupil on some types of council work may only cover seven miles a day,” he observes.

Goupils have been bodied as mobile coffee bars, and one business uses them to transport a giant battery. It can be used to recharge an electric vehicle if it happens to be stranded, for a fee.

Goupil is owned by Polaris Industries – best-known in the UK for its range of ATVs.

“We thought we’d sell 300 to 400 cherry-pickers this year but we’ve sold 700, many of them to businesses we didn’t realise needed them,” she says. “A lot of it is down to increased stress on health and safety, with insurance companies saying to their clients that if they’re asking employees to climb tall ladders with the risk of a fall from height, then they’re not considering the safest option.”

Cherry-pickers mounted on 3.5t vans typically offer a working height of up to 15m, and up to 13.2m if they are mounted on a pick-up. “They generally weigh around 750kg to 800kg, so if you put one on a 3.5-tonner then you’ve still got enough payload left over to carry the parts and tools you may need,” she explains.

Recent design changes as well as notable changes to the type of steel used have cut the weight by around 60kg; a useful saving. “Our kit still isn’t light though,” admits Ramsden.

Where pick-ups are concerned, the favoured platform is often Isuzu’s D-Max. The majority of van-mounts CPL supplies are based on Renault’s Master, although it has just built its first one on a Ford Transit, with a 13.8m working height.

D-Max and Master are often preferred because of their relatively low un-laden weight says Ramsden, with Renault Trucks the latter’s favoured supplier. It has been able to use its truck industry experience in conversion work and the specialist knowledge of its dealers in what can be a complex area of the market to benefit a range of CPL’s customers, says Renault Trucks head of light commercial vehicles, Graeme Neagus.

“It’s not just the hardware, it’s our level of expertise,” he comments.

Cherry-pickers are usually run off an engine power take-off. The drawback of that approach is that the engine has to be left ticking over, with all the implications that has for engine wear, fuel usage, as well as CO2 output and harmful emissions.

As a consequence, CPL can arrange for them to be powered by onboard batteries instead; an approach that will become increasingly important over the next few years as more and more battery-electric vehicles go into service.

A number of CPL cherry-pickers have now been built on the all-electric Master Z.E at both 3.1 and 3.5t, says Neagus. Ramsden says that hydraulic out-riggers are not essential and that CPL’s light commercial cherry-pickers are perfectly stable without them.

Although some particularly safety-conscious operators favour them nevertheless.

Neagus adds: “We’ve done a lot of testing to show that you don’t have to fit hydraulic legs to our vehicle because it’s stable enough already. That means it can be put to work more quickly when it gets to a site because there is no need to wait while its legs are deployed.

“There’s less risk of accident damage too because their feet always protrude slightly below the sill, and they can be hit if you drive over a kerb. Without them, the vehicle is both lighter and cheaper.”

Horizontal reach can sometimes be as important as maximum working height. As a rule of thumb the former tends to be, very approximately, half the distance of the latter. How much weight can a cherry-picker elevate? Ramsden claims: “With a model mounted on a van, you’re usually talking about 200kg increasing to 240kg if you’ve got it on a pick-up; two people plus their tools in other words.”

Therefore, the installation work need not be all that complicated. “With a van for instance you are basically talking about cutting a hole in the roof, installing a sub-frame plus the necessary wiring, and fitting a large rear platform, “ she says.

Renault Trucks has been instrumental in coming up with a cut-away version of Master. It involves removing the rear doors and creating enough space to allow most of the cherry-picker’s basket to be accommodated within the envelope of the vehicle rather than stowed on the external platform.

Neagus says: “It makes the vehicle easier to manoeuvre because it reduces the rear overhang, and there’s less risk of accident damage.” It is also worth noting that Renault Trucks offers a version of the Master that is converted to four-wheel-drive by Oberaigner. It
can be equipped with a cherry-picker, which in turn can be used to access off-road installations.

Those prices include the base vehicle as well as the cherry-picker.

As with so many other products, however, customers will have to wait many months for delivery. At the time of writing CPL was quoting mid-2022 dates, adding that it was likely that lead times would soon stretch towards the end of next year.

Isuzu (UK) has developed its own extensive conversion operation at its import centre in Sheerness in Kent with a list of clients that includes Network Rail and the Environment Agency. The importer has supplied 96 vehicles to the latter, with two pick-ups transformed into fuel bowsers.

It has also delivered some 80 pick-ups to the facilities management specialist MITIE.

In the winter they can be deployed to keep car parks clear with a demountable gritting pod, plus a demountable snowplough attached to a mounting bracket designed and fitted by Isuzu (UK). In the summer they transport lawnmowers.

Around 500 D-Max pick-ups a year pass through the conversion centre, and Isuzu (UK) works with third-party converters and body builders too.

It has worked with Bristol-based TGS to develop a prototype 4x4 D-Max tipper with its gross weight increased to 3.5t courtesy of a VB Tech air-suspension kit.

“We haven’t yet decided whether we’re going to proceed with it though,” Scott says.