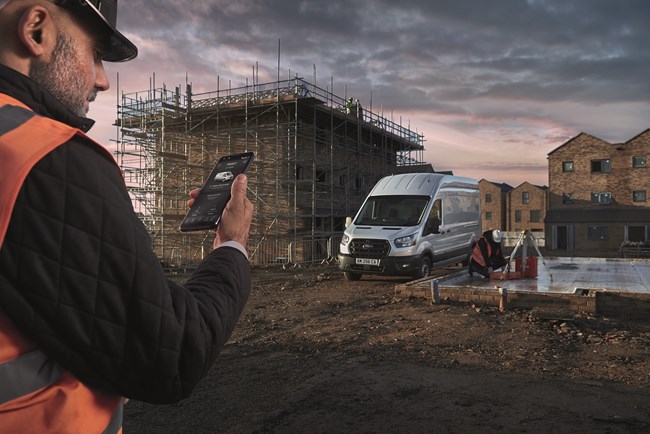 Gone are the days when van drivers set off with a pile of deliveries to make and the office had no idea where they were unless they rang in from a roadside call box. Today’s light commercial drivers can be tracked continually, and the boss can redirect them to pick up goods by seeing on-screen which driver is closest to the collection point.

Tracking has, of course, been around for a while and is now being accompanied by a host of other services offered by van manufacturers and independent suppliers.

Among light commercial brands leading the move towards increased connectivity is Mercedes-Benz with PRO connect. It links over 100 sensors in a van to the operator’s laptop, tablet or smartphone through an onboard hub that transmits live data via 4G.

As well as allowing you to locate the whereabouts of your vehicles, it can download a host of data about their state of health; everything from fluid levels to how worn their brake pads are and whether they need replacing.

Such health checks can be especially useful to companies that do not have a dedicated transport manager. Under those circumstances vans may be the responsibility of someone who has lots of other work to do.

“This means that defects on vehicles may not always be picked up,” says Mercedes connectivity manager James Riddington. If PRO connect signals an alert, however, then appropriate action can be taken.

“It can send a warning if there is a problem with a starter battery for example,” he says. Far better to address that glitch promptly than to have a van refuse to restart half-way through a delivery round.

If a van is subject to a variable service interval then PRO connect will send an alert 1,500 miles or 14 days before it needs to visit a workshop, Riddington says. “It can inform your
local dealer at the same time,” he adds.

That is not all PRO connect can do.

If somebody on a busy construction site needs to get some equipment out of a van but doesn’t have the keys, then a smartphone app is available, which allows them to unlock the doors and retrieve whatever it is they need.

If you happen to be operating an electric eVito or eSprinter then you can use the PRO connect app to see how much range it has got left and whether it is charging, being driven or has been parked somewhere. The same app can be used to pre-heat or cool the cab.

Many businesses are uncomfortably aware of the risk that their vans could be broken into and possibly stolen. In response, Ford has come up with Guard Mode. This warns owners via their smartphones of possible breaches of security through Ford Pass Pro, the company’s app for commercial vehicle operators.

A notification will pop up if somebody gets into your van, opens the bonnet or one of the load area doors, or starts the engine. If it is 8am on a Sunday morning and the vehicle is locked up unattended in your yard ready to go back on the road at 7am the following day, then none of this should be happening.

The warning will be triggered even if somebody has unlocked the van and started the engine using a key. That key could have been stolen or cloned, after all.

The notification is transmitted using the van’s FordPass Connect modem. Similar alerts warning that somebody may be breaking into or stealing your van are offered through Volkswagen’s We Connect Plus module, which includes tracking.

Light commercials are increasingly equipped with telematics hardware as standard whether the owner wants to make use of it or not. All new Citroens, for example, have Connect Box installed as part of their basic specification.

Owners can subscribe to the company’s Free2Move Connect Fleet telematics package, which offers three subscription levels. Operators can benefit from everything from tracking and service and maintenance alerts to driving behaviour analysis and geofencing alerts, depending on which option they pick.

“Most of our vehicles are equipped with Apple CarPlay and Android Auto allowing in-cab compatible apps to be displayed on the dashboard touchscreen,” a company spokesperson said. “It’s down to the app developer to decide whether they add support for these interfaces,” he continues. “Key apps like WhatsApp, Google Maps and Facebook Messenger are supported, for example.

“Of course, the feature sets of these apps may be different when used through Apple CarPlay and Android Auto to ensure that they are used safely and don’t cause distraction,” he adds; a point that all van drivers and owners should bear in mind.

No matter how good they may be, packages developed by individual manufacturers can become less appealing if a company runs several different makes of van. No business want to juggle three or four different systems. In response, Ford has extended the functionality of its Ford Telematics fleet management tool to include data on vehicles made by rival manufacturers.

It has also introduced the Ford Telematics Drive app, which can show fleet managers who is driving which van, digitise daily checks and report accident damage or mechanical problems.

The UK’s light commercial market leader has forged links with telematics company Geotab, enabling Ford Data Services to be integrated into the MyGeotab platform. There is no need
to install extra hardware.

Ford is additionally working with Google globally, and the results should be seen in some of its products from 2023 onwards. They will involve the use of Google’s Android operating system, with Google apps and services built in. Drivers will be able to make extensive use of voice commands courtesy of Google Assistant, while Google Maps will form the basis of the vehicle’s satellite navigation system. Google Play will give whoever is at the wheel access to their favourite apps so they can listen to music, podcasts and audiobooks.

Independent suppliers of telematics services are not going away and are continuing to make inroads into the van and truck market.

Sewer and drain repair specialist Colus has opted for Ctrack’s telematics technology to help it manage its fleet of over 60 specialist commercial vehicles. As well as tracking, it includes a driver ID system designed to ensure that they are operated solely by authorised members of staff.

In many cases independent players are offering products that van manufacturers have yet to embrace to any great extent.

These include onboard cameras that form part of a telematics system and can record incidents. They may be able to provide irrefutable proof that a third-party claim for compensation following an alleged incident with a fleet driver is unwarranted, for example.

Cameras can be installed that cover the road ahead and monitor load area doors to see what’s been loaded and unloaded and when.

“That can be invaluable if a customer claims that goods were delivered that had already suffered damage,” says VisionTrack’s European sales director, Vernon Bonser. Footage may show that the items were fine when they were taken off the van.

A camera can keep an eye on the driver, too. While this sounds intrusive, it can be of positive benefit to the individual concerned if there is a collision and somebody claims
they were eating a sandwich or lighting a cigarette at the time of the crash. Camera footage can show for sure whether the driver had both hands on the wheel and eyes on
the road.

Winner of What Van?’s 2021 Technology Award, VisionTrack has also introduced Autonomise.ai, a cloud-based platform that can connect to any third-party system and is infinitely scalable.

Telematics data can require careful interpretation; so SmartWitness, which scooped What Van?’s 2021 Risk Management accolade, has come up with SmartAnalytics. Powered by AI, it uses multiple data sources to build up a more accurate picture of incidents and what actually happened.

“For example, a driver accelerating hard to filter into fast-moving traffic on a motorway would be written down as behaving badly – indulging in unnecessarily harsh acceleration, in other words – by a traditional system,” says a spokesperson. “However, SmartAnalytics takes into account the change of road type and would deem this a necessary course of action.

“It would strike it out as a false positive,” he adds; and the driver would not be criticised as a consequence.

Do that, and they are more likely to take prompt action – and prevent minor problems from snowballing into major ones.