Towing: Keeping on the ball

Adding a trailer can be a cost-effective solution, but it’s not without its hitches. 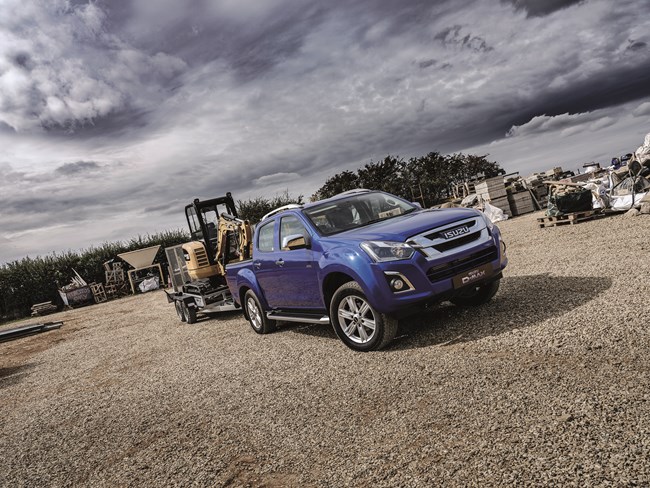 A trailer can increase your payload and productivity for moderate outlay, but there are many factors to consider when finding a solution that’s right for you.

To start with, you should ignore the first of the two classes of trailer your LCV can tow. Category 01 trailers have a gross weight of up to 750kg unbraked, making payloads minimal, while the lack of parking brake is impractical.

So, we’ll concern ourselves with Category 02 trailers, which weigh 750kg–3,500kg laden and are fitted with overrun braking on all wheels.

Strictly speaking it’s mass, not weight; the glossary for towing refers to the vehicle unladen as kerb mass and laden as maximum authorised mass (MAM). The mass of the laden vehicle and trailer, known as the combination or train, is the gross train mass (GTM).

If you passed your car (Category B) driving test before 1997 you are allowed to drive a vehicle and trailer combination of up to 8,250kg GTM. The MAM of vehicle and trailer can be in any combination within the maximum allowance for vehicle MAM, trailer MAM and GTM by the vehicle manufacturer. The figure was originally agreed by adding the 7.5t vehicle limit on the old car licence to the Category 01 trailer limit of 750kg. Although generally the MAM of the towing vehicle will be more than the trailer MAM, this licence does allow for the reverse, where a 3,200kg MAM 4X4 can tow a 3,500kg MAM trailer. In practice this rarely occurs with large vans, as few 3.0t–3.5t LCVs can tow trailers of over 2,500kg MAM.

For those with a Category B licence issued after 1 January 1997, the situation is slightly more complex.

You can drive vehicles up to 3,500kg MAM with up to eight passenger seats and tow a trailer up to 750kg MAM. You can also tow trailers over 750kg if the total MAM of the GTM is not more than 3,500kg, provided that the MAM of the trailer does not exceed the unladen or kerb mass of the towing vehicle.

For example, a van might have a kerb weight of 1,400kg, a MAM of 2,500kg and a towing allowance of 1,500kg. So, with the van laden you can only tow 1,000kg to stay within 3,500kg GTM. With the van unladen it would suggest a towed mass of the van’s towing limit at 1,500kg. However, its kerb weight is 1,400kg so that is the trailer’s MAM limit. The closer the van’s MAM gets towards 3,500kg, the lower the trailer allowance. This is not due to the ability of the vehicle, but instead down to the restrictions on the driver’s licence.

To tow other combinations you will need to take a further test to gain licence Category B+E. This is not difficult for an experienced driver to achieve. You can then drive a vehicle with a MAM of 3,500kg and a trailer with MAM of up to 3,500kg within the maximum allowance for trailer MAM and GTM set by the vehicle manufacturer. For example, a Land Rover commercial or 4X4 pickup of 3,200kg MAM with a trailer allowance of 3,500kg MAM adds up to a 6,700kg GTM. However, check the vehicle’s GTM limit, as it could only be 6000kg–6,500kg. This will be shown on the chassis or VIN plate.

The very fact that advisory bodies cite court rulings tells us what a minefield this can be. The bottom line is that if the vehicle MAM or combination GTM exceeds 3,500kg and it is used for hire, reward or the commercial carriage of goods, a tachograph is required.

A couple of notable exceptions are that if the trailer is fixed plant, such as a compressor, it cannot be used to carry goods, and if the materials and tools are purely for the driver’s use and travel is within 50km of its base, a tachograph is not required. This would be the case for a builder, for example, but if you are  a builders’ merchant delivering those same materials you would come under tachograph requirements.

Trailers in Category 02 have a maximum length of 7.0m (plus drawbar) and a top width of 2.55m. Some car and plant transport trailers approach 7.0m but most general purpose, dropside and tippers are seldom over 5.0m in length. Likewise, most box van and dropside designs work to the older 2.3m width since their 3,500kg weight limit would come into play first.

You must be able to see down both sides of the trailer – with accessory extension mirrors if required – but there’s great peace of mind in choosing a trailer no wider than your van.

When loading, having ensured all previous parameters are met, the noseweight must be considered. This is the vertical load the trailer bears down on the vehicle. The towbar’s ‘D’ value or the vehicle’s limit, whichever is lower, must not be exceeded. Best practice is for the noseweight to be between 5% and 10% of the trailer’s MAM if the vehicle allows it, and to then deduct twice that from the vehicle’s maximum payload to prevent overloading the
rear axle.

When loading a mini-digger or mower, put the trailer’s rear steady legs and jockey wheel down for better stability, even when hitched to the van. Then place the machine over the trailer’s axles, not all the way to the front. Likewise, don’t load all the paving slabs up against the headboard, though that might seem the safest option – think balance and centralisation. Secure with ratchet straps, preferably crossed over the main load, and check them after the first few miles.

Hitching up is easier with an extra pair of eyes, but not impossible, and once the trailer is coupled and locked it can be tested by winding down the jockey wheel in an attempt to lift the van. Connect the breakaway cable from the trailer’s brakes to the eye or loop on the towbar, stow the jockey wheel, connect and check the trailer lights and take off its parking brake. With the combination in a straight line, set the van mirrors or accessory items to see the same (small) amount of trailer in each.

Once on the road, consider the change to the vehicle’s characteristics. Its increased length is actually not the biggest issue, but allow for wider turns and ensure the mirrors let you see where its wheels approach the kerb. Mass is the main concern once more. Consider how the van behaves from empty to fully laden, and add that on again. Stopping distance is another major consideration as overrun brakes are very effective, but the trailer must be slowed initially. The combination’s ability to move out into a roundabout or busy traffic also takes time to get used to.

Then comes the reverse: if you’ve been driving vans for a while, it’s not as difficult as you may think. Get the combination in a perfectly straight line with the same amount of trailer visible in each mirror. Reverse at a quarter of the speed you would normally and, as the trailer fills more of one mirror, steer slightly towards that side, as it moves through the straight-head, to fill the other mirror. Then steer in that direction slowly, gradually and frequently until you can reverse in a straight line, with the van’s front wheels doing repeated small zigzags. Do the same through a curve with corrections to the steering – little and often is best. If it starts to get away from you, don’t wear out the front tyres trying to get it back. Pull forwards to the point where it went wrong and start again. Maximum patience and minimum ego wins the day.

When unloading, use any steady legs and the jockey wheel again. With tipping trailers pay careful attention to uneven ground and only drive forward with the body raised if you have to, with at least half the load already gone.

Like any skill, practice makes perfect and familiarisation leads to confidence. Understand the laws – including the laws of physics – and a trailer, correctly maintained, can be a shrewd investment and a beneficial addition to your van.