IVOTY Analysis: Stepping stones on the road to a zero-emission future

Earlier this year Stellantis CEO Carlos Tavares announced ambitious plans for the group. George Barrow finds out what that means for LCVs. 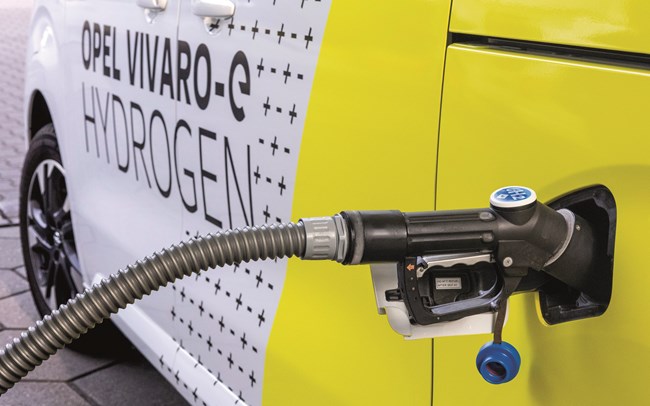 To be ‘daring’ is, according to the dictionary, to be brave enough to do something difficult, and that’s exactly where the ambitions of Stellantis are heading. Europe’s second largest vehicle manufacturer has an industry heavyweight at the helm. His name is Carlos Tavares, the recently-named most powerful man in the automotive industry, former CEO of Groupe PSA and now Stellantis CEO, after its 2021 merger with Fiat Chrysler Automobiles.

While all manufacturers are under pressure to meet emissions targets with a European wide ban on combustion engines due to come into force by 2035, Stellantis not only expects to meet those targets but beat them, with UK brand Vauxhall only selling electric cars and vans by 2028, a 50% reduction in their 2021 carbon footprint by 2030 and, perhaps most ambitiously, a pledge to be globally carbon neutral by 2038.

Its intentions are laid out in the group’s Dare Forward 2030 plan covering electrification, hydrogen and software with four key aims: to reduce carbon footprint by 50%, to be 100% battery electric (BEV) in Europe and 50% in America in their sales mix, to be number one in the services and products they provide and to double revenues with a double-digit margin compared to 2021 – all of which sounds like a considerable undertaking, but one which Tavares believes is achievable.

“2030 is all about transforming our company into an automotive tech company,” he says.

“In that index there is technology and we believe that humanity will be better served if we have technology neutral regulations and if we can bring the best of our engineers to a point where they can bring solutions to our society.

“The more global the issues are, the less fragmented the world is for me, because if those issues are global, you should be all together trying to fix them, not going in a fragmented direction. We believe science is a solution and we have been doing this work on fuel cell-powered vehicles because we were among the first to bring a fuel cell light commercial vehicle to the market with the mid-size van. We are now preparing to bring the full-size [van] to the market.”

He points out the work on fuel cells follows the introduction of electric versions to all Stellantis’ LCVs.

Customers have already received test vehicles of the medium-sized hydrogen van (Dispatch, Expert and Vivaro, which What Van? reported on in June) but by 2024, the large vans (Relay, Boxer and Movano) will also be launched with hydrogen when the company can utilise a new common platform that is better prepared for electrification. The final piece in the jigsaw will be the heaviest American pick-ups from RAM, which will get “hydrogen in the tank” in 2026.

It is likely all of these products will come with a hefty price tag, but while one of the key objectives is to double revenues it won’t necessarily be done through the list price of vehicles, although Tavares acknowledges that prices will increase.

“Doubling the company’s revenues is something we feel we have good control over. We are going into several new segments such as software, data, circular economy, technology and – unfortunately I have to say – more expensive vehicles,” he says. “As you know, all the electrified technology that we are bringing into the market is going to lead to more expense. That’s quite obvious, even though we are working very hard to reduce the costs. But I have always been very transparent on the fact that with electrification more technology is going to be needed. In some cases you may see on the transaction pricing some increases because of this. But this is the consequence of what the authorities have decided in terms of regulations,” he argues.

With its K9 small van and K0 medium-sized van already available as electric models and with the intention of rolling out the hydrogen K0 across Europe, there is an obvious challenge of infrastructure to overcome.

“We are not in the business of infrastructures, with the exception [of our] Free2Move e-solutions on the electric charging units that we engineer and manufacture for all of the world. We are very much dependent on infrastructure developments. What is specific to fuel cell, which I think is something interesting, is that if you are sending a fleet of vans to a company you may have the capability to bring them back to a single point of charge every day, which then will make the business case of investing in a charging unit or a filling unit, something that is a reasonable, profitable investment.”

Tavares sees a business opportunity for fleet owners to invest in filling units on their premises as they become more affordable, to enable a large number of vehicles to return to the same location for refuelling on a daily basis. The aim is to bring solutions to the areas where the group perceives weaknesses compared to the well-known management of ICE vehicles.

“I think this tension is the consequence of poor strategic management of clean mobility in several parts of the world, starting with Europe. But I think also that it’s going to be fixed. Because the more people are encouraged to use zero-emission vehicles, the more they will put pressure on their political leaders to fix the infrastructure.

“So, I expect it to be fixed over time but of course, there is going to be a tension, I believe, between now and 2030,” Tavares predicts.

Tavares also sees another change in the way the automotive business will conduct itself in the future, citing his own experiences starting as an automotive engineer in 1981 where cars were significantly lighter than they are today.

“I was engineering B-segment cars at 800kg per car, but years later the same car is roughly double in weight on the EV version. We are using more and more raw materials. And as the consumer wants to fight against range anxiety the size of the batteries is increasing, because we are putting more and more energy, cube kilowatts, kilowatt hours on the battery pack. I think that once this transition is done, let’s say, after 2027/2028, we are going to realise that the automotive industry is using a huge amount of raw materials. Which means the next big thing will be how to make EVs lighter and to ensure we don’t fall into a raw material scarcity that either limits the freedom of mobility or increases pricing. At the end of the day if it’s not clean, it’s not affordable, it’s not going to work.”

While 2028 may seem like a long way off, in product cycle terms it is close. Stellantis’ progress on LCVs has not only seen it leap to the front of the pack with its market share but has also seen it manage to maintain profitability while doing so. Stellantis’ Dare Forward plans are ambitious but the steps already taken and those planned give it every chance of success. After all, to dare is to do and Tavares is definitely a doer.

Does Luton have an electric future?

Hearing Carlos Tavares’ thoughts on a variety of topics, from Stellantis’ increasing involvement with Toyota on sharing LCV products and the question of whether they will share fuel cell production (the answer is no) through to how future production will be assigned to factories, made for a fascinating morning, but I had to ask him an important question about the role the UK will play in all of this. Ellesmere Port has already been confirmed as a manufacturing site for the range of small Stellantis electric vans, securing thousands of jobs at the factory and in the area with a £100m investment. Vauxhall’s Luton plant has secured its short-term future with more production of the mid-sized vans but there are already calls for its production to be electrified as demand for products like the Vauxhall Vivaro-e takes off.

Ever the politician, Tavares would not commit to its future role but did give a few hints on the subject, pointing towards the impact of Brexit as well as the size of the UK market. While never actually answering the question, he did say: “We believe with the Vauxhall brand that we are in a very good position to grow our presence in the UK, and this is our strategic intention.” I will be keeping my fingers crossed Luton gets a similar commitment to electrification as Ellesmere Port.

George Barrow is the UK judge for the International Van of the Year award.