Van operators can avail themselves of a host of packages aimed at making accidents less likely. 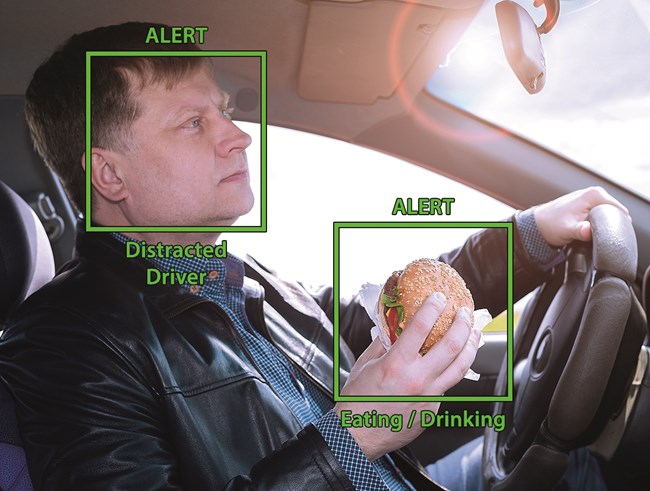 With inflation rising and household budgets under pressure, there’s one sure-fire way of encouraging van drivers to drive more safely and burn less fuel. Offer them a cash incentive.

That is what Asda is doing so far as its home-delivery drivers are concerned.

The supermarket giant has had an in-cab coaching device sourced from Lightfoot installed in its 3,000 home-delivery vehicles which connects directly to their on-board computers and converts the data they generate into live driving advice. Follow the advice and you
will drive more sensibly, with less brutal acceleration and less equally-brutal heavy braking.

The device is accompanied by a smartphone app which awards individuals a score at the end of each delivery run based on their driving style. It allows them to see how their driving has improved – or not – over time.

Those who are good enough to achieve Elite Driver status can enter The Drivers’ Lottery and potentially win weekly cash prizes of up to £100, not to mention all sorts of other goodies.

In the first year of operation the programme dished out over £13,000 along with rewards such as a mini drone and an Amazon Echo Dot.

The cost of running the scheme is balanced by lower fuel and accident damage bills, not to mention reduced wear-and-tear on the vehicles. Burn less fuel and you reduce emissions.

Nor should its contribution to upholding the retailer’s public image be underestimated. Few homeowners will want their online purchasers delivered by drivers who drive irresponsibly in vehicles clearly displaying the supermarket’s brand.

The app allows each driver to enter into – hopefully friendly – competition with their colleagues as part of a fleet-wide drivers’ league.

Says Simon Gregg, Asda’s senior vice-president of e-commerce: “We’re continually looking at ways in which we can improve driver safety and we’re delighted that many of our drivers are now engaging with Lightfoot on a daily basis. We’ve already seen the difference that its technology has made to our operation, and hope the partnership continues to help us improve safety standards and benefit the environment.”

Fleets can be reluctant to quote the reduction in the number of accidents or fuel usage they are enjoying through the introduction of new technology in percentage terms. A high percentage can cause observers to wonder how on earth the fleet concerned was being managed before technology rode to its rescue.

Lightfoot however suggests that operators who use its system can benefit from a fall in accident rates of up to 40%, a figure it says is backed by Allianz Insurance. Fuel and emissions savings of up to 20% can be achieved, it adds, a finding it says is supported by Professor Chris Brace, academic director at the institute for advanced automotive propulsion systems at the University of Bath.

It detects and logs risky driving, then aims to correct poor behaviour with targeted safety messages, performance reports and what ADT refers to as Triggered Training; a suite of 27 different modules designed to reinforce good driving choices.

The app uses the sensor inputs of a smartphone combined with learning AI to identify questionable driving behaviour – unnecessarily harsh braking or rapid acceleration, speeding and so on.

It can distinguish between the driver and somebody who is just a passenger, and attribute behaviour accordingly.

A weekly driver performance report is generated and – like Lightfoot’s package – can be used to create a league ladder to encourage drivers to be the best they can possibly be. If driving issues persist then the fleet manager will be notified so that appropriate action can be taken; sending the individual concerned on a speed awareness course, for example.

Concern over the safety of lone workers either in or out of their vehicle is addressed by giving app users 24/7 access to an emergency call centre.

An alarm can be raised with a swipe of the phone or through a three-tap process that can be used no matter whether the phone is in your pocket or a bag. Check calls can be scheduled to confirm a worker is safe; and action taken if no confirmation is received.

Furthermore, Applied Companion is particularly good at distinguishing between a serious accident and the van bouncing and shuddering simply because it has hit a deep pothole, says ADT. That has to be of benefit given that roads in counties such as Herefordshire are liberally pock-marked with such defects.

ADT says it carried out its own 15-month trial of the app which showed a 68% reduction in speeding, a 70% cut in hard braking and a 90% drop in rapid acceleration.

Most modern telematics packages can keep an eye on the conduct of a driver – including watching out for speeding – as well as tracking the vehicle’s whereabouts. Supplying support services to utility companies, P N Daly has had Ctrack’s Driver Behaviour Indicator installed in over 150 of its vans to complement its existing Ctrack telematics system. It is enjoying a significant drop in at-fault collisions as a consequence, it reports.

Employees are placed in a green, yellow or red band based on their driving performance, with an overall score calculated to enable a simple ranking system.

Increasingly, telematics and monitoring systems incorporate cameras that watch the road ahead, and watch the driver too, to ensure he or she isn’t texting on a smartphone or rolling a cigarette while the van is in motion.

Watching the road ahead can protect drivers from unjustified accusations of being responsible for a collision, because the recording may show that the other driver deliberately pulled out in front of them in pursuit of a fraudulent crash-for-cash claim. The mere presence of cameras may deter fraudsters from staging an accident in the first place.

Winner of the What Van? Risk Management Award for 2022, SmartWitness is busy promoting the virtues of the API forward-facing camera. It captures video and telematics data in a single unit and combines all the data generated on a single server.

One of its big benefits is that it can be installed in as little as a quarter of an hour says SmartWitness, with a plug-in connection and a simple windscreen mount.

The benefits of video telematics are not lost on LiveWest. A housing association with over 38,000 properties spread across the south-west of England, it has been busy adopting just such a solution from VisionTrack in its 380 vans.

Footage from the VT2000 dashcams fitted allows dishonest, exaggerated and 50/50 claims to be challenged, LiveWest says; and their mere presence encourages its drivers to drive that bit more carefully.

On-board technology is likely to deliver optimum results if drivers are shown how to drive more safely before they actually take to the roads and start engaging in, for example, the cut-and-thrust of parcels delivery work. Help is at hand from National Highways, responsible for managing and maintaining England’s motorways and major A-roads.

Its commercial vehicle incident prevention team has come up with a Van Driver Toolkit. It can be employed by long-serving as well as novice light commercial drivers.

Developed as part of the Driving for Better Business initiative, it features
over 30 free online modules which address everything from fatigue and distracted driving to vehicle roadworthiness and overloading.

Run on bald, underinflated tyres and with too much weight on board, and you will not be able to stop in time in an emergency. You will also be committing a multiplicity of offences likely to land you in court.

Made up of 40 representatives from some of the best-run light commercial fleets in the UK, the National Highways Van Operator Reference Group was involved in the programme’s creation. At the time of writing, its resources had been accessed by some 1,300 organisations with over 1.3 million light commercial drivers.

Says Mark Cartwright, head of the incident prevention team: “Something I’ve noticed since being at National Highways is the difference between the way truck and van drivers tend to react when, for example, they’re being spoken to by the police about their compliance.

“It’s a bit of a sweeping generalisation, but truck drivers tend to accept that they’ve done something wrong, they know what they should have been doing, and agree that it’s ‘a fair cop’. Van drivers on the other hand tend to have a hundred reasons why they didn’t know how to comply.”

“That’s exactly what the Van Driver Toolkit is designed to help with – to take away the: ‘Sorry, I didn’t know’ response,” says Cartwright, formerly head of vans at the Freight Transport Association, now Logistics UK.

“Remember that getting behind the wheel of a light commercial is a risky business,” he continues. “It’s the most dangerous part of the day for any van driver, regardless of any other duties they may have, and it’s well-documented that light commercials are involved in more fatal and serious incidents than any other class of vehicle on our roads.

“They are also the fastest-growing class of vehicle on our roads; and this growth is showing little sign of slowing down.”

Happily there is no shortage of training from a variety of sources for those who wish to take it.

Earlier this year van rental giant Northgate launched a package of options under the Safe Driver banner including everything from on-highway training to virtual learning. As well as enhancing safety, providing training can encourage employees to remain with a company at a time when staff retention can be a struggle, says sales and marketing director, Neil McCrossan.

“Retention is a key consideration as the competition for staff heats up after the Covid-19 pandemic,” he observes. “But the better you look after your drivers, the more likely it is that they will stay with your business for longer.”