The hybrid Corolla Commercial is the latest addition to the brand’s burgeoning LCV line-up. 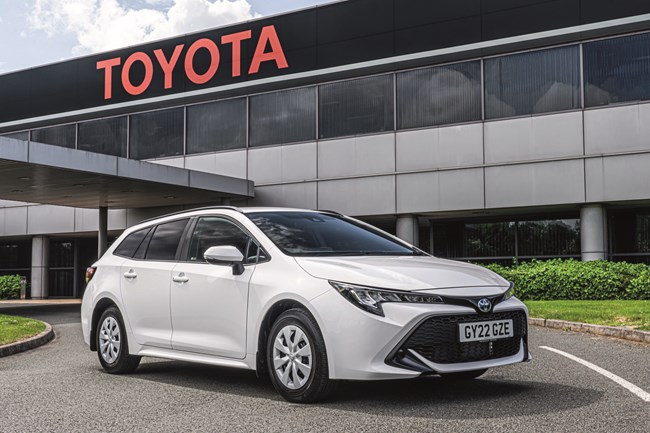 A decade ago, following the withdrawal of its Hiace medium van, Toyota’s sole representative in the light commercial vehicle sector was its stalwart pick-up truck, the Hilux.

In 2013, the brand re-entered the panel van market with the Proace, which was based on what was then PSA Peugeot-Citroen’s medium van platform and has since come under the Stellantis group umbrella.

Toyota continued to hover around the periphery of the LCV sector, however, until Gareth Matthews took to the helm of the division in 2016 with the task of pulling the business in from the margins.

In 2018, the brand launched a commercial version of its big 4x4, the Land Cruiser, before again leaning on its partnership with Stellantis to introduce the compact Proace City in 2020, a model that is also available badged as the Citroen Berlingo, Peugeot Partner and Vauxhall Combo and will in the future also be marketed by the latest brand to join Stellantis, Fiat Professional, as the successor to its current Doblo Cargo. The Proace City Electric arrived in 2021 and the new kid on the block is the Corolla Commercial, which has just gone on sale.

What’s more, Toyota has now announced it will introduce a large van in 2024 as an extension of its agreement with Stellantis. An electric derivative will also be offered.

Along the timeline of this product-expansion journey in 2020 the manufacturer also signalled it wanted to be taken seriously as an LCV player by adopting the Toyota Professional name for its commercial vehicle operation.

Between 2016 and May 2022, it claims to have increased its share of the UK’s LCV market from 1.9% to 4.9% and to have grown its network of LCV-specialist Toyota Professional dealerships from 30 to 142 sites.

The launch of the Corolla Commercial means Vauxhall is no longer the only manufacturer that can lay claim to the boast that it makes LCVs in the UK as Toyota develops and builds the new model at its Burnaston plant in Derbyshire. Not before time it could be said.

Toyota may have invested up to £2.7bn in the Burnaston factory since 1992 but the car-derived Corolla Commercial is the first LCV to roll off the production line.

Developed from the Corolla Sports passenger car, the Commercial has a load space of 1.3m3, a payload of 425kg and is licenced to tow 759kg. It employs Toyota’s fourth generation full-hybrid technology, which delivers 105g/km CO2 on the WLTP cycle with fuel economy of up to 61.4mpg, according to the manufacturer.

Toyota points out that as a full hybrid that does not require a plug-in charge, but self-charges through recovering energy during deceleration, the Corolla Commercial eliminates downtime, it is also not range-restricted as it can run on its 1.8L petrol engine but manages to retain the capability to run solely on electric power for short urban journeys.

Toyota carries out the conversion work at its TMUK Business Revenue Centre at Burnaston.

With no fitment of rear seats or seatbelts on the assembly line, the vehicles are fitted with a flat load-floor with a rubber lining, a steel bulkhead with a mesh upper half, enabling rear-view vision and opaque film to cover the rear side windows. The changes ensure the Corolla Commercial meets N1 type approval requirements as a goods vehicle.

Toyota is offering the vehicle in a single specification with standard features such as an 8in multimedia display, smartphone integration, reversing camera, dual-zone aircon and heated seats. The Corolla Commercial is priced £22,149, excluding VAT.

Matthews predicts it will attract custom from local authorities and councils as facilities vehicles and engineers who need to carry tools but don’t require a heavy payload capacity. “It will appeal to those who can’t go to a full BEV but need to cut the CO2 [emissions] in their fleets,” he said.