Looking to buy a large van? Then read our handy, quick road test reviews of the models in the market before making your next buying decision. 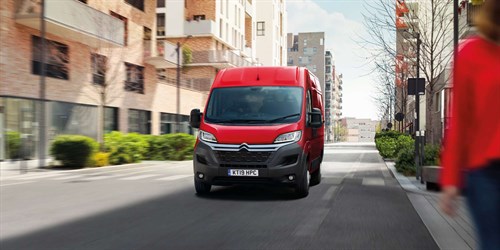 The cabin does not lack functionality, providing a multitude of storage options, while satnav and DAB come as standard. However, the driving position is less car-like than the likes of the Ford Transit, VW Crafter or Renault Master, the quality of the dash plastic leaves much to be desired, legroom is severely restricted for the middle passenger, and the position of the handbrake to the right of the driver can best be described as ‘quirky’.

The van is available in four lengths, three wheelbases and three heights, with load volumes ranging from 8.0m3 to 17.0m3. The fully ply-lined load bay is accessed via a sliding door on the nearside and twin rear doors.

Finally, for a big van the Relay takes corners confidently, while the six-speed manual gearbox is slick. 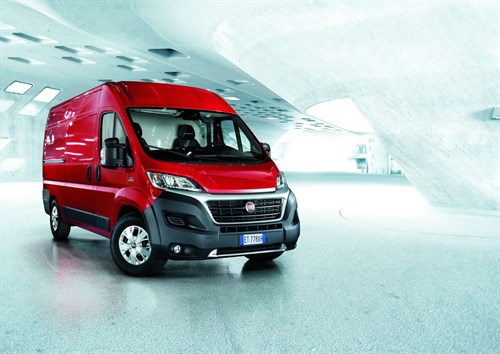 The Ducato looks very similar to the Citroen Relay and Peugeot Boxer thanks to a joint-venture with PSA Group.

Yet there is a key difference under the bonnet: while the latter use a 2.0-litre diesel, the Ducato employs Fiat’s own and more powerful 2.3-litre Multijet II, plus a Fiat 2.0-litre diesel. The 2.3 offers ample performance, especially on the motorway.

The quality of the cab’s plastic trim could be better, while the 5.0in colour touchscreen really needs to measure 7.0in for navigating. On the positive side, cab access is easy and there is no lack of storage space.

Better still, the handling is a revelation, the suspension ensures you are well planted, and the steering tells you exactly what is happening. The ride is acceptable, as is the level of noise suppression in the cab. However, while the six-speed manual gearbox usually poses no problems, the shift from fifth to sixth and back again is notchy at times. 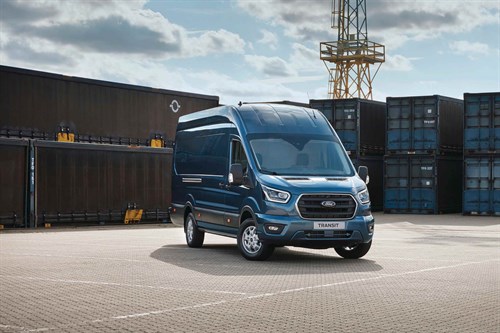 The changes include a taller three-bar grille for the exterior and more practical storage provisions in the cabin. Ford has also upgraded its 2.0-litre Ecoblue diesel engine and added a 185hp variant to complement the 105hp, 130hp and 170hp units. It has also made diesel mild-hybrid (MHEV) tech available across the line-up.

We’d recommend the slick six-speed manual gearbox over the FWD-only six-speed auto (a new 10-speed auto transmission for RWD models is due in Q1 2020). The 170hp MHEV engine in RWD is particularly impressive, coping effortlessly with a 500kg load and content to make stately progress at low revs without demanding to be changed down from sixth gear.

It’s excellent to drive. Electric power-assisted steering takes the strain out of tight manoeuvres in the city but does not diminish the exemplary handling on the open road. It offers plenty of feedback while steering the van exactly where you want. A slight gripe would be that engine and wind noise can occasionally be intrusive when the van is driven harder. 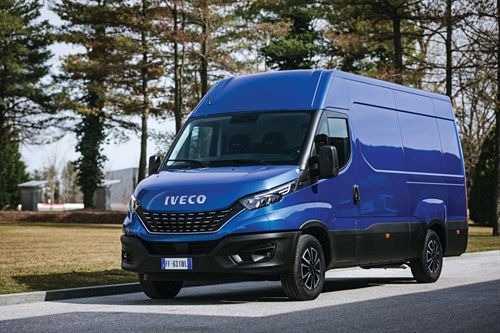 The facelifted Daily comes with new and useful connectivity and driver assistance features.

The latter includes queue assist, which controls the accelerator and brake in slow-moving traffic. An abundance of such tech is why the vehicle won the What Van? Safety Award for 2020.

Other additions include electric power steering and the availability of LED lights.

The Euro6 3.5t Daily is available with a choice of 2.3- and 3.0-litre diesel powertrains with outputs of 120hp to 210hp. You can choose either a six-speed manual or eight-speed auto Himatic transmission, although the 150hp 3.0 is manual-only while the 210hp 3.0 is exclusively Himatic.

With the 180hp 3.0 engine the Himatic shifted seamlessly and worked reassuringly well in combination with precise steering. With half the payload used the ride was sure-footed with no stomach-turning roll. 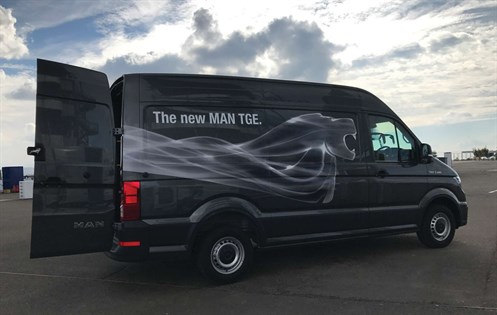 The TGE went on sale in September 2017 and is the first van from bus/truck maker MAN.

It is a restyled version of VW’s Crafter, and is available in front-wheel drive as well as rear- and all-wheel drive models. It is also offered with manual or auto transmissions, and as core tipper, dropside and Luton conversions, as well as in van, chassis cab and chassis double-cab variants.

Through its HGV network MAN claims to be able to offer 65 service points nationwide that are open for 16 and a half hours a day, six days a week, while it provides extended opening hours and around-the-clock, 365 days per year mobile 24-hour roadside assistance.

On the road the van handles well, with the steering tightening up nicely at speed. As for the cabin, it is full of robust-looking materials and practical storage spaces and solutions. Legroom for the passenger in the centre isn’t bad either. 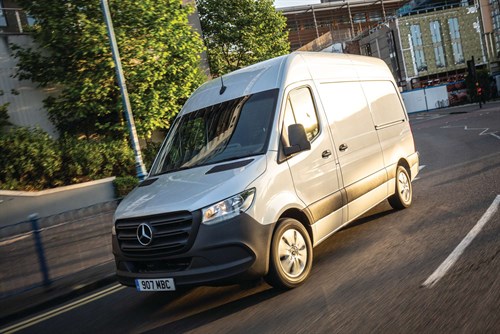 Front-, rear- and all-wheel drive versions and a host of advanced safety features are available with the Sprinter, which was redesigned for 2019.

It is listed with 2.1-litre diesels at 114hp, 143hp and 163hp as well as with the impressive 190hp 3.0-litre V6, though the two most powerful options are not offered with FWD. There’s an optional nine-speed 9G-Tronic auto gearbox for FWD models; go RWD and you’re limited to a seven-speed 7G-Tronic auto. A new six-speed manual is standard across the range. An electric Sprinter should appear in Q1 2020.

With 163hp on tap the Sprinter accelerates strongly away from rest and delivers power seamlessly all the way up the rev band, although the gear-change lacks crispness. The smooth and dependable handling allows you to sweep majestically through bends, but the Sprinter’s ride isn’t its strong suit if you only have a few kilos in the back.

The MBUX infotainment system comes with a 7.0in touchscreen as standard. Bluetooth connectivity is available and the touchscreen can play host to Apple CarPlay and Android Auto.

Load volumes range from 8.0m3 to 17.0m3, and crew vans, tippers, dropsides and box-bodied chassis cabs are available. There are two trims, E and SE, with the latter featuring a high level of kit.

Power comes from a 2.3-litre dCi Euro5 diesel engine developing 100hp, 125hp or 150hp. It is up for grabs with either a six-speed manual transmission or six-speed semi-auto.

Usefully manoeuvrable at low speeds, one of the FWD NV400’s biggest plus-points is its handling, and ample feedback through the steering allows you to push hard along twisting B-roads. The 125hp unit is no sluggard on the motorway either, and once you get the hang of the semi-auto shift it is smooth.

We had few quarrels with the ride bar some bumping and thumping from the suspension, but we were concerned about the amount of rattling and creaking generated by the body. However, noise levels inside the cab are well suppressed. 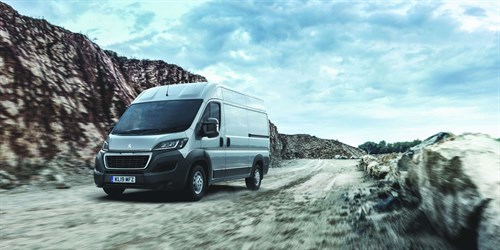 All come with a six-speed manual gearbox.

The van also comes as standard with telematics software.

Inside the cab Peugeot could improve the quality of the plastic trim, especially where the dash is concerned – it looks a bit cheap compared with the material used by some key competitors. On the plus side, however, cab access is easy and there is no lack of storage space.

On the road, meanwhile, the van delivers a competent ride.

With three lengths, three roof heights, front- or rear-wheel drive, five 2.3-litre diesel engines and a wide range of conversions, there’s no lack of choice where the Master is concerned.

There are also two trim levels, Business and Business+, and the entry-level gets rake-adjustable steering, ESC with hill-start assist and the Grip Xtend traction control system, plus DAB radio with USB connectivity and Bluetooth.

All engines are mated to six-speed manual or Quickshift6 transmissions. The twin-turbo Energy dCi 165hp, which we tested in FWD LM35 LWB, medium roof, Business+ form, offers precise steering, and the six-speeder is reliably crisp.

The cabin boasts a plentiful 150 litres of storage room. Much of this is accounted for by the space beneath the passenger seats, which isn’t compartmentalised. The overhead shelf, however, is split into two with a tachograph holder in the middle. Pulling down the middle seat back, meanwhile, reveals a desk with a swivelling table.

Finally, an electric version, the Z.E., went on sale in the last quarter of 2018. 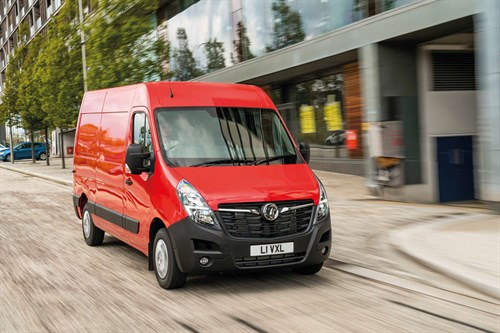 The Movano is sold with one level of specification, which includes a driver’s airbag, two in-cab 12V power points, and plenty of storage options.

Electric windows and electrically adjustable and heated mirrors come as standard too.

Vauxhall deserves praise for adding a mirror in the passenger sun visor that enables the driver to spot anything lurking in the nearside blind spot.

The van is sold with either front- or rear-wheel drive, and for a relatively big LCV it handles surprisingly well, with plenty of feedback from a nicely weighted steering system that aids manoeuvrability at low speeds. The unladen ride is a bit choppy, though, and the cab could do with a bit more sound-deadening.

A revised model started appearing in showrooms in September 2019. It is available in four lengths and three heights, with a max payload of 2,110kg and max cargo capacity of 17.0m3. Power comes from a 2.3-litre diesel engine available with power outputs ranging from 130hp to 180hp. All come with six-speed manual transmission, while an automated manual gearbox will join the range at a later date.

What Van?’s Light Commercial Vehicle of the Year in 2018 is available in front-, rear- and all-wheel drive 4Motion formats.

It also comes in three wheelbases, three roof heights, and as a single- and double-cab chassis cab, offering load volumes of 9.9-18.3m3.

A 2.0-litre diesel engine powers the range with outputs of 102hp, 122hp and 140hp, plus there’s a bi-turbo TDI with 177hp. The powertrains come mated to a six-speed manual or an eight-speed auto gearbox.

The cabin is full of robust-looking materials and storage spaces, but the overall effect is a little dull. That said, the auto aircon is excellent, and the satnav/infotainment system cutting-edge.