Looking to buy a medium van? Then read our handy, quick road test reviews of the models in the market before making your next buying decision. 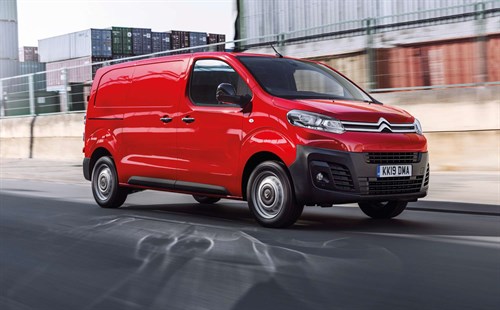 It has been updated with Euro6.2 engines. The range now starts with a 100hp 1.5-litre diesel engine. Other engine options are 2.0-litre diesels with 120hp, 150hp and 180hp. All come with a six-speed manual gearbox, except for the 180hp engine, which now comes with an eight-speed auto, replacing the six-speed auto previously on offer.

Prior to the engine upgrades we tried the 150hp 2.0. It delivered excellent acceleration, while a slick gear change from the six-speed manual transmission helped get the best out of the impressively responsive powertrain. The ride was smooth and refined with little discomfort caused by uneven road surfaces, and wind and engine noise wasn’t intrusive.

Interior finishing may not quite match Ford’s Transit Custom or VW’s Transporter, but the cabin is well laid out.

Like the Nissan NV300 and Vauxhall Vivaro, the Talento is based on Renault’s Trafic, but features cosmetic differences, such as LED headlamps on the bumper.

It comes with a choice of four Euro6 diesel engines – two single-turbo and a pair of twin-turbos – with outputs of 95-145hp. The vans are available in standard and high-roof formats, in short- and long-wheelbase versions, and as crew vans and a LWB chassis cab.

The model has inherited many of the Trafic’s innovations, including the hatch in the bulkhead that allows a load length of up to 3.75m in standard versions.

It is particularly happy on motorway slogs, so operators more usually engaged in urban work may prefer the 125hp twin-turbo or either the 95hp or 120hp single-turbo. These smaller engines are not, however, the most economical, with the most frugal honour going to the 125hp twin-turbo with figures of 47.9mpg and 155g/km

Responding to customer feedback that the interior needed additional storage space and a more user-friendly dash, Ford’s 2018 facelift of the Transit Custom, the model’s first, featured a completely new cabin.

It comes in two roof heights, two wheelbases – with gross vehicle weights ranging from 2.6t to 3.4t – and with payloads up to 1,450kg.

Bodystyles comprise panel van, kombi and double-cab-in-van. A plug-in hybrid (PHEV) is due in dealerships in September 2019.

An Econetic variant of the Ecoblue 2.0-litre diesel engine has been introduced to the short-wheelbase 105hp drivetrain, and it emits an official 148g/km of CO2 and achieves 49.6mpg – 6% up on the previous most efficient model in the line-up.

On the road, responsive steering means the Ford heads in precisely the direction you want it to go in, while the suspension system ensures you hang on to the highway through some surprisingly tight bends.

The ride could stand to be slightly better damped, however. 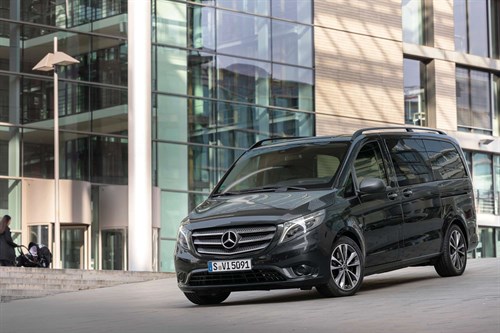 At the start of 2019 Merc brought in three defined specs – Pure, Progressive and Premium – and then added the flagship Sport trim.

Cleaner Euro6c-compliant engines are now available too. The panel vans consist of RWD models, with 2.1-litre diesel engines of 136hp, 163hp or 190hp, and a FWD powered by a 102hp 1.8-litre diesel.

Build quality is excellent and the standard of fit and finish high, but the cabin feels dated and cramped. Mercedes has persisted with some quirks, such as the foot-operated parking brake with its clunky hand release, while the middle seat allows no legroom for the passenger. There is a decent amount of storage space, though.

We drove the 136hp van and had no complaints about performance or drive quality – it is powerful, with the precise electrically assisted power steering working well with the smooth changes of the manual gearbox in our van. The suspension is firm enough to keep body roll well under control when cornering without compromising ride comfort. 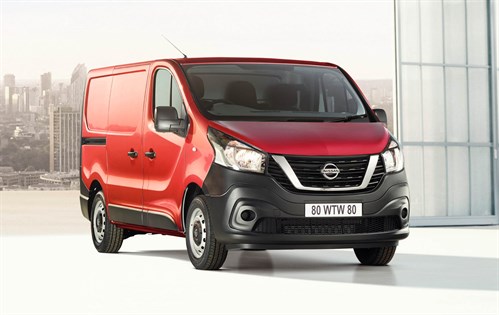 Nissan launched the updated version of the NV300 at the back end of 2019.

The model now comes with a new 2.0-litre diesel engine producing 120hp, 145hp or 170hp – with the most powerful two available with a new dual-clutch automatic transmission – as well as a previously available 95hp 1.6-litre diesel.

Gross vehicle weights extend from 2,700kg to 2,900kg, and a load-through hatch extends the load length.

While the handling may not quite match the Ford Transit Custom’s, it comes close. The steering tightens up nicely as you punch through bends and offers lots of assistance when wriggling into parking spaces. The gear changes are slick, while acceleration from rest and up through the gears is strong too, and the ride copes well with the varying quality of road surfaces. The cabin, meanwhile, has ample storage. 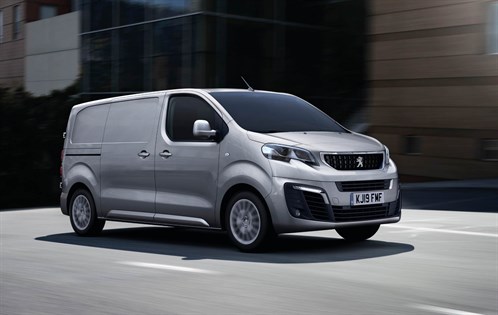 The Expert was updated with engines that comply with the Euro6.2 emissions standard in 2019.

The range starts with a 100hp 1.5-litre diesel. Other options are 2.0-litre diesels with 120hp, 150hp and 180hp. All come with a six-speed manual gearbox, except for the 180hp, which has an eight-speed auto. All engines are fitted with stop-start tech.

The model is available in four trims, with two higher specs introduced, so the range now comprises S, Professional, Grip and Asphalt, while a flagship Sport Edition is due in 2020. The van now also has emergency call and assistance services as standard across the range.

On the road the electric power steering tightens up sufficiently to tackle sweeping motorway bends with aplomb and offers sufficient assistance to enable easy parking. More feedback would be nice on twisting rural roads, though.

An e-Expert will be launched in the second half of 2020. It will come with two battery options, offering ranges on the WLTP test cycle of 124 miles or 186 miles. Peugeot says loadspace volume will be identical to that of diesel-powered Experts.

This is a well thought-out package with good road manners and a decent standard of kit.

There’s plenty of storage and the Trafic excels with a variety of shelves, bins and cubbyholes, plus the ability to flip down the back of the inboard passenger seat and transform it into a desk with a compartment for a laptop.

It’s marketed with two body lengths and two roof heights. Load cubes range from 5.2m3 to 8.6m3, while payloads extend from getting on for 1,100kg to approaching 1,250kg.

Out on the road the gear shift is precise and smooth and the gear lever itself is pleasingly chunky and sturdy. In line with most modern vans the steering wheel is user-friendly and car-like in its dimensions.

It’s worth noting, though, that a facelifted version will start being delivered from September 2019. It comes with a new range of 2.0-litre diesel engines, and a six-speed automatic gearbox has also been added, alongside a six-speed manual. New driver assistance systems and improved infotainment are part of the package too.

The Proace is available with three body sizes and two wheelbase lengths.

A roof height of 1.90m means it can negotiate barriers at toll gates and underground car parks, and in common with its sister vehicles, the Peugeot Expert and Citroen Dispatch, medium and long derivatives with the 2.0-litre engine boast a class-leading max payload of up to 1.4t.

The entry-level model is wedded to a five-speed gearbox; all the others are six-speed manual and come with stop/start. We test drove the 120hp 2.0-litre medium-length Toyota Proace in Comfort trim. With its 1.4t payload filled to 50%, the ride was comfortable, while wind and road noise was well suppressed. Also, the short-throw change is slick, and from a handling point of view the Proace holds its own with the best-in-class, such as the Ford Transit Custom.

The Vivaro was developed alongside Renault’s Trafic.

It has two trim levels to the Trafic’s three, and with the French brand’s switchgear the cabin doesn’t have the car-like quality of Ford’s Transit Custom. But kit levels are pretty good. The range covers two roof heights and two wheelbases.

All engines offer 1.6 litres, with 90hp and 110hp turbodiesels, as well as 120hp and 140hp bi-turbos. The 90hp also has an Ecoflex version with improved economy. The bi-turbo engines are refined and punchy, the ride is comfortable without compromising body control, and only steering that’s a tad light compromises things, although that turns into a plus in urban spaces.

A third-generation Vivaro is now available to order, however, based on the Citroen Dispatch and Peugeot Expert platform. It has three trims. Payload goes up to 1,400kg, 200kg more than the outgoing model, and cargo capacity is 6.6m3. All engines – 1.5-litre diesels with 100hp or 120hp, and 2.0-litre diesels with 120hp, 150hp and 180hp – meet the Euro6.2 standard. A battery electric version is set to follow in 2020.

What Van? sampled a 102hp Euro6 2.0-litre model and found that the ride quality in our part-loaded test vehicle was good, although a fair degree of road rumble made its way into the cabin, while the chassis control and steering feel made the LCV a decent place to pass the time.

In terms of safety, post-collision braking is standard on all models, while front assist, adaptive cruise control, high-beam assist, lane change assist and driver alert systems are all optional.

All models come with a USB socket, DAB, and a five-inch touchscreen. But the glovebox appears too small for even the handbook, while there’s just about enough legroom for a passenger in the middle seat. The Transporter also lacks some clever innovations such as load-through hatches, internal ladder racks or folding roof rails that rivals provide.

In February 2019, Volkswagen revealed the latest update to its Transporter people-mover. Bigger news, though, is that the brand revealed a facelifted Transporter in April 2019, although UK launch details and prices are yet to be announced.