Looking to buy a pick-up or 4x4 van? Then read our handy, quick road test reviews of the models in the market before making your next buying decision.

The 2018 What Van? Awards was the third year on the trot that Dacia’s competitively priced Duster Commercial spirited away the 4x4 Van of the Year accolade.

Price, a high level of equipment, and an ability to keep going whatever the conditions underfoot, are why it is a winner once again.

Based on the Dacia Duster SUV, the Commercial is powered by a 109hp 1.5-litre dCi 110 diesel. It comes in two trim levels, Ambiance and Laureate, and also as a 4x2 and 4x4. All models come with a six-speed manual gearbox.

A rear hatch and a hinged door on each side of the body give access to the 1.6m3 load bay. Payload capacity is 550kg.

The 2017 Frankfurt motor show saw a revised Duster launched with a restyled exterior, redesigned dashboard and upgraded seats. New items included a blind-spot warning system and curtain airbags. Right-hand drive versions should appear in the UK in the 2018 summer.

The Duster Commercial is well-priced, well-equipped and well put together, and any doubts about build quality are more than counter-balanced by its capabilities. 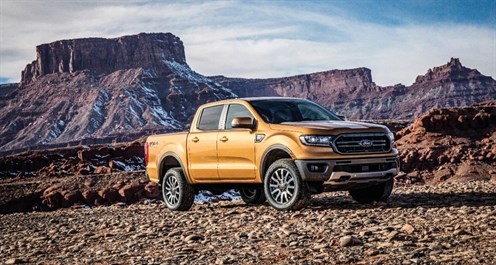 Ford carried out a facelift for 2019.

Exterior features include a revised front bumper and a new grille, while higher-spec versions get bi-xenon headlights and LED daytime running lights.

As before, the Ranger is available in regular-, super- and double-cab bodystyles. It comes with four-wheel drive as standard.

Power comes from a new 2.0-litre Ecoblue diesel engine, producing 130hp or 170hp with a single-turbo, or 213hp with a bi-turbo set-up – the latter installed in the high-performance Raptor, which is billed as the range’s toughest model. Its chief appeal will be to those who want to off-road quickly and regularly. But that doesn’t mean it’s a nightmare on the tarmac, where the ride is on the firm side but not uncomfortably so, and refinement is good, with no undue intrusion from wind and road noise.

Meanwhile, a six-speed manual gearbox is standard on the Ranger, while the 170hp and 213hp engines are also available with a 10-speed auto. A 3.2-litre diesel engine from the outgoing model remains. 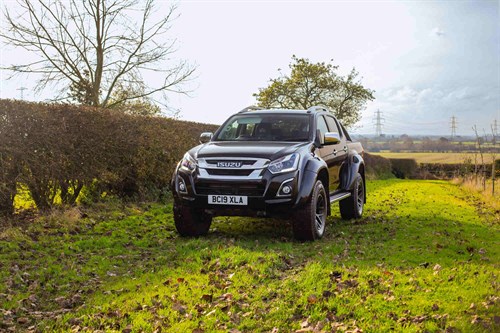 Marketed in single-, extended- and double-cab guise, one reason why it has kept its crown is the way the range has continued to evolve. Take the XTR, a trim level sitting above the previously range-topping Blade spec, and below only the extreme limited-edition Arctic Trucks model. Aimed at off-road enthusiasts, it features a bespoke Pedders suspension and brake system, plus Pirelli Scorpion All Terrain Plus tyres.

Then there are the limited-edition models. At the higher end, this includes the Blade+, which is based on the regular Blade trim, but with upgrades including a front skirt, 19in gun metal alloys, pro-lift tailgate assist, and laser lights in the front bumper. At the other end of the scale there’s the Workman+, based on the entry-level Utility. It features a rear load liner, tow bar, 13-pin electrics, side steps, and a reversing camera that displays its image in the rear-view mirror.

There’s also the V-Cross, based on the mid-range Utah. Upgrades here include a wireless charger and a front camera.

All many operators require is a light commercial vehicle with some extra traction control, that will keep going if the local B-roads get a bit slippery in winter and will not get stuck if the driver has to take it into a muddy field – which is a role the second-generation 4x4 version of Mercedes-Benz’s Sprinter more than fulfils.

The vehicle features the manufacturer’s 4ETS Electronic Traction System, which kicks in when one or more of the wheels start to spin, braking each one individually while increasing drive torque to those that still offer sufficient grip.

Four-wheel drive is selectable with a 35:65 split between the front and the rear axle, and the ground clearance is slightly higher than what is on offer from the mainstream rear-wheel drive model.

However, the second-generation Mercedes-Benz Sprinter is now reaching the end of the road, and if you’d prefer the latest, third-generation model – in all its forms, including both pick-up and 4x4 panel van bodystyles – it can now be seen in UK showrooms.

The Mercedes-Benz X-Class is seriously car- or at least SUV-like on-road and thoroughly convincing off-road.

The exterior design is smart and striking too, while working within the limited palette of its Nissan Navara underpinnings and proportions (the X-Class is lower, wider and a bit longer, but shares the exact same wheelbase).

The interior is pretty good at first glance too, with lots of Mercedes’ car design cues imported.

Six-footers can sit one behind the other happily, and a higher ‘stepped’ ceiling ensures decent rear headroom. Behind the rear passenger’s head the sliding rear centre window can be operated electrically from the driver’s seat and through it you can look out onto a 1,587x1,560mm load bed, which will take a Euro pallet.

But some areas – e.g. the lower dash and auto gear selector – suffer from poorer-quality finishes. Despite this, we can see Mercedes UK succeeding in its aim of selling more plusher Progressive- and Power-trimmed models than the basic Pure, and with top-end versions of the Ranger and Amarok in its sights Ford and VW might have cause for concern. 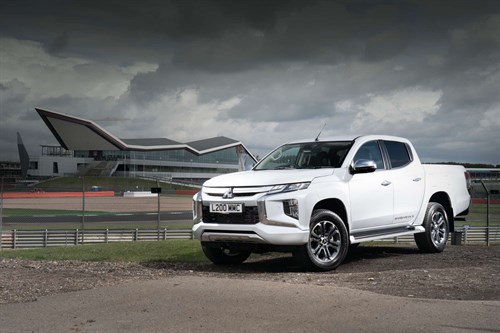 Mitsubishi has made a series of visual changes to its new L200.

Outside, there’s a more muscular aesthetic, while inside looks less like a utility vehicle and more like an SUV – although it does not challenge the Mercedes X-Class in that department. The safety kit is of the type routinely seen on cars, but relatively unusual in the pick-up world. It includes forward- and rear-collision mitigation, blind-spot warning and lane-change assist.

Mitsubishi has replaced its old 2.4-litre four-cylinder diesel that was available at 181hp in the double-cab variants, and was offered with either a six-speed manual or five-speed auto gearbox with a new 2.2-litre unit.

This means a cut in power to 150hp and peak torque, which drops from 430Nm to 400Nm, although Mitsubishi claims driveability as well as fuel economy and C02 emissions have improved.

A six-speed manual is still offered but is now joined in the range by a six-speed automatic.

On the road the engine performs well enough, with decent grunt, but it does get a bit noisy when worked hard.

The vehicle offers a refined driving experience, and the road and engine noise is not intrusive. Off-road, the 4x4 system makes sure there is no drama in tackling slippery farm tracks and icy rural lanes.

Generous kit levels include cruise control, stop/start and hill-start assist, while the load area is reached through a rear tailgate plus two side doors that aren’t ideal loading apertures.

Mitsubishi, meanwhile, has launched a new LCV version of its Outlander PHEV 4x4. The latest Commercial variant of the plug-in hybrid is powered by a 135hp 2.4-litre petrol engine and two electric motors, with a max combined output of 230hp. Under official NEDC-correlated figures it achieves a combined fuel economy of 159mpg, a pure-electric range of 33 miles, and CO2 emissions of 40g/km (respective figures under more realistic full WLTP testing are 139mpg, 28 miles and 46g/km). 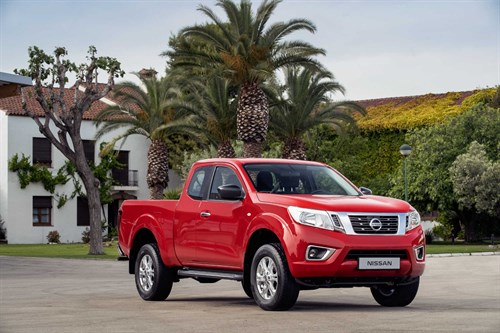 Nissan revised its 4x4 pick-up for 2019 with a new six-speed manual transmission, multi-link rear suspension fitted to all models, and changes to its braking system. Payload capacity is up by at least 54kg to as much as 114kg.

Improvements have been made to in-cab connectivity and to the standard 2.3dCi diesel engine, offered at either 163hp or 190hp.

Customers can pick from five trims: beginning with the Visia King Cab and finishing with the N-Guard Double Cab seven-speed automatic.

For a big pick-up the Navara handles remarkably well. Tight bends can be tackled without having to worry that the back end will decide to swing out at an inopportune moment.

Unfortunately, the ride is not up to the same standard – when the cargo box is empty you feel every bump, although everything calms down with a load on board. Things start to smooth out noticeably when half-laden.

With 190hp on tap you are not short of performance, and the power is poured on steadily as you accelerate. We had no major issues with the gear change or in-cab noise levels. 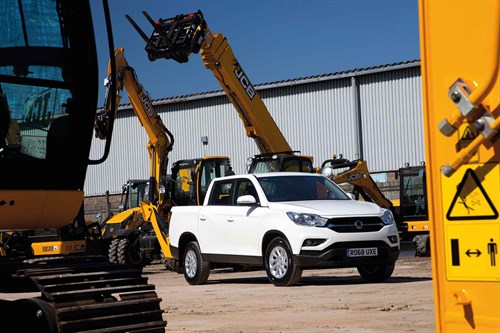 The double-cab-only Musso is based on the same platform as Ssangyong’s Rexton 4x4 SUV.

Power comes from a 2.2-litre diesel engine, which is available with either a six-speed manual or six-speed automatic transmission.

Spec levels are high with DAB, Bluetooth and manual aircon on all models. The cabin is well laid out with a decent amount of storage, and back-seat passengers appreciate the comfort and roominess on long journeys.

A selectable four-wheel drive system is simply operated via a central dial positioned near the transmission selector.

The six-speed auto transmission is occasionally slow to react when accelerating but is generally slick enough. The steering, though, is a little light with too much play when cornering.

A class-leading seven-year 150,000-mile warranty is a definite plus. 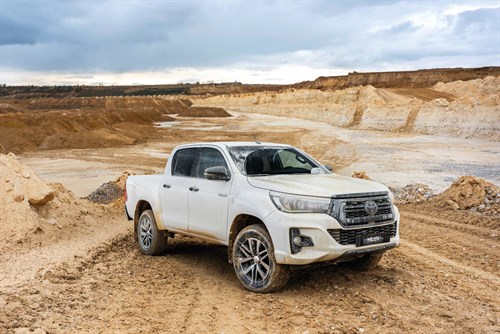 We have previously tested an Invincible with a six-speed auto transmission. The vehicle felt light about town, and the auto gearbox certainly takes the strain out of urban driving. But the steering can feel vague, with too much play when cornering, and while the auto ’box is decent there is some delay between shifts. Off-road, the extreme competence remains intact.

The 150hp 2.4-litre turbodiesel engine comes with stop/start but falls short of the most economical models on the market. The cab has quite a lot of tacky-feeling black plastic, too, and is no match in styling or quality terms for some rivals.

However, to keep its truck in the spotlight Toyota unveiled a new Invincible X flagship in Q3 2018. It features a new front end plus some fancy kit. It is powered by the 150hp 2.4-litre diesel mated to a six-speed auto – a mix that delivers power smoothly and is welcome in tight, congested urban streets, although it also provides impressive performance on motorways. 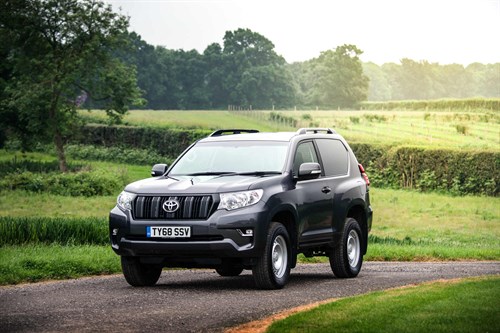 Toyota’s van version of the 4x4 Land Cruiser is produced in both short- and long-wheelbase guise, with three and five doors respectively, and is a potential alternative to the Hilux.

The winner of the What Van? 4x4 Van of the Year Award for 2020 has two trims, with the base-spec launch model supplemented by a higher-spec Active trim. Making its debut at the 2019 CV Show, this features equipment such as alloy wheels, satnav and a more comfortable interior.

The 4WD van offers stronger acceleration and sharper handling than you might expect from a 4x4, plus it feels solidly planted on the road. It rides acceptably too, coping on all sorts of surfaces, on- and off-road. But slightly tighter steering and a crisper gear change would be appreciated. Access to the load area is via a single, rear door.

There’s plenty of storage in a cabin that boasts aircon and switches for LED front fog lights, cruise controls and electric windows. Finally, the service intervals are too short, but the warranty is lengthy.

The beefiest engines come with an eight-speed auto transmission, while the least powerful get a six-speed manual. Four-wheel drive is always on tap in the autos, but is selectable on the manual.

Inside features a conservatively styled dashboard with a touchscreen infotainment package.
The 224hp 3.0-litre V6 Amarok did not lack performance, and motorway or dual-carriageway cruising was a doddle. Power is translated smoothly into acceleration, particularly when wedded to the consummately slick eight-speed auto transmission. With a gross weight of almost 3.3t, the VW appears to steamroller bumps flat, while the steering tightens up nicely at speed and delivers plenty of feedback.

However, Volkswagen Commercial Vehicles is due to stop selling its Amarok  in the UK and across the rest of Europe from the summer of 2020.