The Transit is a global leader that has defined the panel van for half a century – and it dominates to this day, writes Ian Shaw. 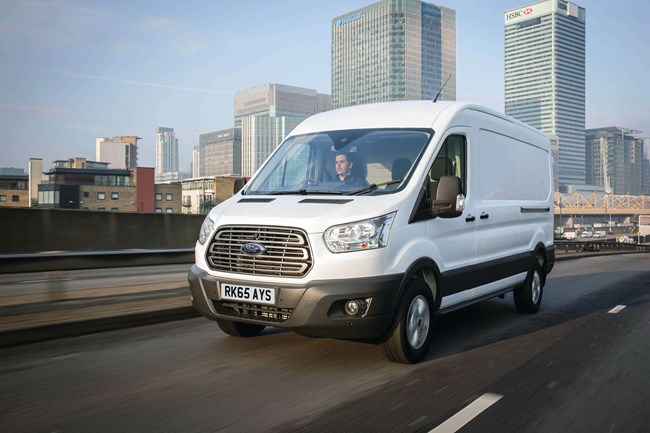 To the layman, any disposable pen is a Biro, any vacuum cleaner a Hoover, and any panel van is a Transit.

To see your model name taken as the nomenclature for a whole product type, you need to be the first, the best or the most prolific. You could argue in the case of the Ford Transit, it is all three.

The Transit was launched in 1965. A clean-sheet design, it owed nothing to the Taunus Transit in Germany, nor Ford’s small van the Thames.

It was simply revolutionary, boasting contemporary car comfort, car engines, including V4 and V6 petrol units, and hence car performance. Despite its numerous variants and options of length and height, its refinement was the real step forward.

The first version lasted 21 years until 1986, but it would need to change more frequently thereafter as the competition caught up. The fifth-generation model, with which we are concerned here, was launched in 2013.

The launch 2.2-litre Duratorq diesel engine with a choice of three power ratings (100hp, 125hp, 155hp) and a six-speed manual transmission was replaced from 2016 by Ford’s 2.0-litre Ecoblue diesel engine, said at the time to enhance fuel efficiency by up to 13% compared with the outgoing 2.2 TDCi, with CO2 emissions from 157g/km.

It boasts up to a two-year/37,000-mile variable service interval, and a six-speed manual transmission is used with front, rear or four-wheel-drive, but from mid-2017 the six-speed automatic was also available in combination with the 130hp and 170hp versions of the Ecoblue engine, with auto stop-start as standard. Designed specifically for the Transit, the Selectshift six-speed auto has a torque capacity of more than 415Nm.

Ford claims a total of 450 variants for this generation of Transit, but we won’t attempt to list them all here. With a total of four wheelbase lengths  and three roof heights Ford claims that model-for-model, load volume had been increased by around 10% compared to the previous Transit.

For example, the L2 van’s maximum volume has risen from 10.3m3 to 11.2m3, enabling it to transport four Europallets and carry 3.0m-length items along the floor.

The largest Jumbo variant ups that to 15.1m3 of cargo.

The extra-long extended L5 versions, which are the longest production Transits ever built, boast a load length of more than 5.2m, while the Double Cab-in-Van variant can accommodate up to seven people with standard four-person second-row seating.

There are few common faults with this generation of Transit. The auto stop-start system can throw up its fault light and cease to work, but generally resets once the vehicle is switched off and locked. The 2.2-litre diesel had some turbo-intercooler pipe failures and will go into limp-home mode, but any that are main dealer-serviced will have been rectified if needed. The main issue is operator abuse, such is the Transit’s tough reputation.

Check carefully for signs of hard use and avoid high-milers that have been towing too.

Five Best Examples Of What's Out There