Re-badging in the motor industry is so common that even Mercedes-Benz does it. But is that for the better in the case of the X-Class? Ian Shaw reports 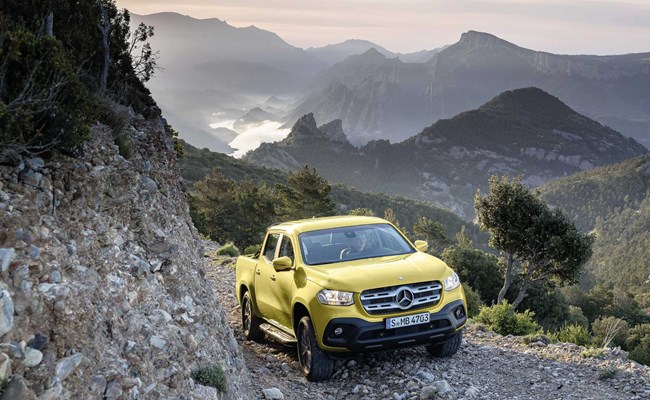 You could not think of an automotive maker with a bigger portfolio than Mercedes-Benz.

It makes everything from Formula One engines to airport buses, from luxury cars to panel vans, from agricultural vehicles to supercars, but never, until recently, pick-ups.

The pick-up started as an American phenomenon, found favour Down Under as the Ute, and mobilised the Pacific Rim and rural economies in developing nations. In the UK, it’s a minor player in agriculture and utilities, finding its natural environment in the office car park while lowering company car BIK taxation.

This was not lost on Merc LCV boffins, who having bitten the bullet of joint collaboration on the Sprinter (with VW and its Crafter) and Citan (with Renault and its Kangoo) went for another one with the pick-up, using Nissan’s Navara as the basis for its X-Class.

It’s more than a simple re-badge in the way of the Fiat Fullback and Mitsubishi L200. The X-Class uses Mercedes V6 diesel units in the top models and its own seven-speed auto transmission and permanent 4WD system on the six-cylinder versions.

Power outputs range from 160hp to 190hp in the four-cylinder diesels and some 260hp for the six-cylinder diesel. Some markets outside Europe get a 165hp petrol four-pot, meaning the X-Class could respond quickly to any future bias or taxation from anti-diesel leanings in the marketplace.

The X-Class is a proper off-roader too. Ground clearance is up to 221mm depending upon specification, with decent approach and departure angles of 30° and 26° respectively, with the ability to wade through 600mm of water. Probably of more interest to most buyers, however, is the 3,500kg towing capability of the full-spec 4Matic six-cylinder models. Even the 2WD four-pot pulls 1,650kg.

The payload is not massive at 1,042kg, but it at least means the X-Class is VAT-reclaimable. Overall it is 5,340mm long and 1,920mm wide. That could be viewed two ways: it’s a decent load bay allied to five seats, or very little working space for something so big. You choose.

Progressive offers the best choice of kit, with the range-topping 350d 4Matic auto matching the company’s luxury SUVs in the touchscreen, nav/comms/infotainment/cameras department.

Mercedes used to be a byword for solid build, but in the 1990s quality suffered at the hands of cost-effectiveness, although we found no horror stories with the X-Class. Dare we think it may be the Nissan genes? No matter – this is a solid, hardworking if expensive entrant to the pick-up sector.

Five to look out for

Five to step away from