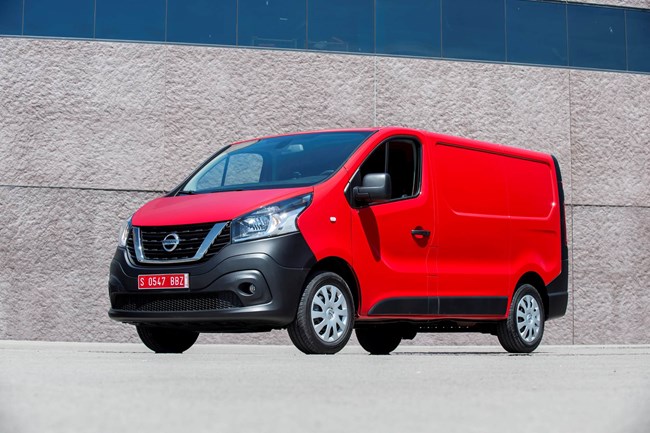 Launched in 2016 and previously called the Primastar, the NV300 is based on the third-generation Renault Trafic.

That van was introduced in 2014 and replaced the second generation on which the Primastar and also Vauxhall’s Vivaro were based. Following GM’s sale of its Euro interests to Peugeot-Citroen, however, the new Vivaro that will be launched at the CV Show is based on the Peugeot Expert and Citroen Dispatch.

A big change for this NV300 was to go with smaller engines, the 1.9-litre being ousted in favour of the Euro6 AdBlue-consuming 1.6dCi ‘Energy’ unit in three power outputs of 95hp, 120hp and 145hp. The first two use a variable geometry turbocharger, while the other employs a twin turbocharger. All supply abundant torque via six manually selected ratios.

The twin-turbos has stop/start engine technology for reduced fuel consumption, plus an ‘eco’ mode switch with gear shift indicator, which is an option on the 95hp unit. The most fuel-efficient panel van is the 120hp, with CO2 emissions of only 155g/km.

Built at the Renault-Nissan Alliance plant at Sandouville, France, the NV300 comes in four combinations of length and height, consisting of L1H1, L1H2, L2H1, L2H2, with two sizes of six-seater crew van: L1H1 and L2H1. Numerous rear tailgate and side door combinations – solid or glazed – are  available as options. There are also two variants of the rare NV300 Combi (L1H1, L2H1), providing seating for up to nine people.

Sticking with the panel van, it can carry three standard Europallets in L1 guise, while the load bay of the L1H1 van is 110mm longer than the Primastar’s, meaning it can easily accommodate up to 10x2.5m plasterboard sheets. A hatch in the cabin bulkhead is an option to allow for loads up to 3.75m long in the L1 and 4.15m in the L2. Cargo volumes  range from 5.2m3 to 8.3m3.

Satellite navigation, DAB, Siri voice control (for iPhone users), rear-view camera and USB map update are offered as options across the range with the NissanConnect infotainment system, and most are on the Tekna as standard.

Driver assistance systems include Park Assist with a rear-view camera whose image is displayed in the rear-view mirror. In addition to the expected ABS is electronic brakeforce distribution, electronic stability programme (ESP), anti-slip regulation traction control, and hill-start assist as standard. If the optional tow ball and factory-fit trailer electrics are specified then trailer sway mitigation is added, utilising the vehicle’s ESP system to help stop the tail wagging the dog in crosswinds and the like.

With Nissan’s five-year/100,000 miles LCV manufacturer warranty and recommended service intervals of two years/25,000 miles, the NV300 is cheap to run for average-mileage operators, and this generation of Trafic on which the NV300 is based has a good reliability reputation, although a full service history is a must.