The Relay recipe has never radically changed, only been improved upon, writes Ian Shaw. 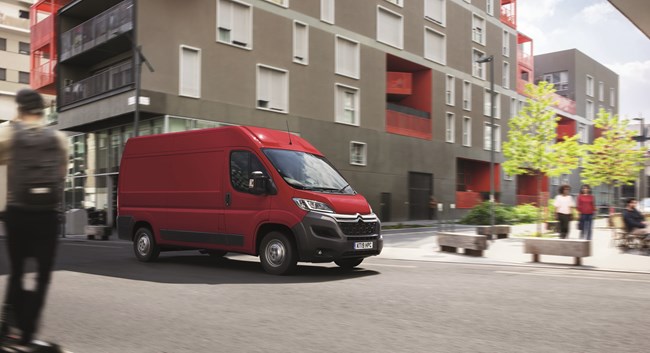 The Relay name goes back to the early 1980s, but the familiar shape of the Sevel PSA/Fiat joint project vans has been with us from the early 1990s, and we see it here in its fourth full generation, which began in 2014. A facelift came with Euro6 engines in late 2016 for the 2017 model year. This saw the familiar HDi drop from 2.2 litres to a straight 2.0-litre size, with better efficiency to boot.

The Citroen Relay and Peugeot Boxer have, of course, always used the PSA diesels, while the Fiat Ducato utilises the Fiat/Iveco-developed Sofim engine. Although designed for broadly the same task – albeit the Sofim has to produce higher outputs for the Iveco Daily’s heavier applications – they differ in character. Each has its army of fans in LCV operators and we have always found that the Fiat Ducato offers that bit more mid-range punch and feels very slightly more willing at lower revs, while the PSA engine offers a somewhat softer, smoother power delivery tempered by a slight loss of steam in the upper reaches. The 2.0HDi Blue engine comes with three power outputs of 110hp, 130hp and 160hp. Our choice would be with the two higher-output units – and not just because we like bigger numbers. The torque curve of these, although a tad steeper-sided, gives the mid-range punch required, particularly if towing. The 110hp engine, however, is perfectly capable for the smaller sizes of the Relay, and around city streets is equally effortless.

What all the Sevel vans offer in equal measure, however, is high productivity. In total the Relay offers four lengths as a panel van. Designated from L1 to L4, overall it measures 4.9m, 5.4m, 5.9m and 6.4m, from nose to tail. This translates into load bay lengths of 2.67m, 3.12m, 3.70m and 4.07m respectively. Combine this with three choices of internal height at 1.66m, 1.93m and 2.17m and a load bay width of 1.87m (1.42m between the wheel arches) and you have a choice of load volumes of 8-17m3. If you need more than that we found several examples of Citroen’s approved chassis cab conversions with box or Luton bodies on the used market too. Payloads depend upon specification and trim, but for a 3.5t GVM panel van they are right on the money, ranging from 1,100kg through to an impressive 1,600kg.

Cab comfort has always been a Citroen strongpoint and this Relay carries that to a new level. The seats are excellent, the vision is great due to the huge glass area, and the mirrors are panoramic.

Build quality might not match the German makes and service history is a must, but the Relay is tough and high mileages are no problem.