The Proace is a Toyota in name only. However, that’s no bad thing, writes Ian Shaw. 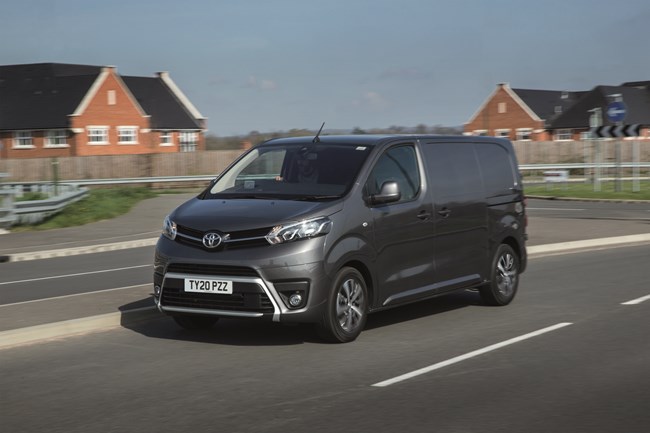 The Japanese manufacturers have never made as big an impact with LCVs in Europe as they have with passenger cars. The Japanese domestic – and huge Pacific Rim – markets have legislation and traditions that make their full-size commercial vehicles difficult to adapt to European tastes, and with the notable exception of the 4X4 pick-up, the same is true of LCVs. The microvan and midi van models from Suzuki, Daihatsu and Isuzu had a decent run in the 1990s with excellent load-to-overall-dimension ratios, thanks to the in-cab engine position, but legislation then demanded more of a frontal collision crumple-zone than just the driver’s face, so that was that.

While other Far East offerings were dropped from the UK, Toyota went properly front-engined with its Hiace replacement, the PowerVan, and did reasonably well here. Then in 2016, pragmatism won through and the Proace, a rebadged second-generation Citroen Dispatch, become its van mainstay. In 2019 a facelift of the French stalwart created the second-generation Proace and it is the one we feature here.

The three Proace versions range in overall length from 4.6m to 5.3m, with a maximum load space length of 2.16m through 2.51m to 2.86m in the long-wheelbase derivative. An optional folding front passenger seat with load-through hatch in the bulkhead gives an additional 1.16m of length. Load volumes are 5.1m3, 5.8m3 and 6.6m3 respectively. An internal load height of 1.4m is housed within an overall height of 1.94m, making underground car parks and the like easily accessible for facilities management contractors. The payload is equally impressive at 1,485kg, for a 3.1t GVM, with 1,100kg – easily breaking the 1.0t barrier – for the 2.6t GVM variant. It’s a far cry from those midi van days.

Pulling all that along is the job of either a 1.6-litre or 2.0-litre turbodiesel engine. Available in two power outputs of 95hp or 115hp, the 1.6-litre unit is by far the most common and to our minds the best choice. The 2.0-litre offers quite a bit more power and is only available with automatic transmission – the rest get a six-speed manual – but the overall gains are not worth the increase in fuel consumption.

The Icon has rear parking sensors, manual air conditioning, the Smart Cargo load-through bulkhead, and height-adjustable driver’s seat, while the 7.0in touchscreen is also up for grabs. The Design models get parking sensors, blind spot monitoring, adaptive cruise control and a head-up display.

Cab comfort and storage is good. Toyota has benefitted from PSA here, but the mirrors are a bit small compared to some and we have heard of some build quality issues with water ingress to the cab. Of more concern, make sure you check any post-2018 Proace that has had a recall for seatbelts carried out. But overall, it’s a very good van, now made to European tastes.