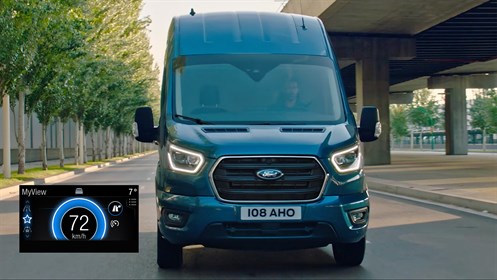 Ford is introducing its EcoGuide technology to the Transit in the middle of this year.

(Continued from page 1) Bodybuilder Cartwright was planning to use the NEC event to showcase its new lightweight, rigid low-floor box van, displayed on a 3.5t Vauxhall Movano.

Cartwright is marketing the conversion as a low-entry delivery van that can withstand the punishment of busy parcel delivery assignments.

The current Movano is based on the Renault Master platform and heavily facelifted versions of both models are set to come to market in September.

Now that Vauxhall belongs to the PSA Group, however, the next generation of its large van is likely to be a rebadged version of the Citroen Relay and Peugeot Boxer, which are themselves the result of the longstanding ‘Sevel’ partnership between PSA and Fiat Chrysler Automobiles (FCA).

PSA and FCA have recently extended this agreement, which sees the manufacturers build the Fiat Professional Ducato, the Peugeot Boxer and the Citroen Relay  (badged Jumper outside of the UK) large vans at the Sevel Sud plant in Val Di Sangro, Atessa, Italy, until 2023.

PSA and FCA have confirmed the extended agreement will take in production of a large van for the Opel and Vauxhall brands.

In order to meet an expected increase in demand, PSA and FCA say production capacity at Sevel will be increased from 2019 with additional shifts and added in a joint statement:

“The agreement also foresees the complementary use of PSA Group manufacturing capacity to assemble certain versions of the large vans for the Peugeot, Citroen, Opel and Vauxhall brands in the medium term.”

A more imminent arrival to the large van sector will be a refreshed Iveco Daily, with the current iteration having been on sale for four years now.The Daily is available in diesel, gas and electric versions.