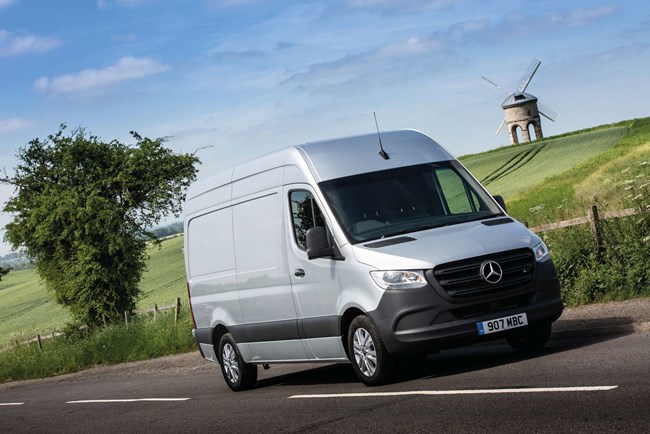 There are some big-selling models within the ranks of the large van sector – one thinks of the Ford Transit, Mercedes-Benz Sprinter and Peugeot Boxer, for example – but heads were turned when the Society of Motor Manufacturers and Traders released its overall LCV sales figures for August and there was the Sprinter sitting at the top of the table with sales of 3,104 for the month, putting it 30 registrations ahead of the medium-sized Ford Transit Custom, which is usually a nailed on fixture at the top of the table.

To put this anomaly into perspective, over the first two-thirds of the year Ford sold over 20,000 more Customs than the number of Sprinters Mercedes shifted (37,763 v 17,543).

The Sprinter was also behind the Custom’s big brother, the Transit (19,605), as the trio reached 31 August as the UK’s three best-selling vans.

The Transit was the third bestseller in August on 2,118, and another large van, VW’s Crafter, sneaked in at number 10 with sales of 632 in what is traditionally a low-volume month ahead of the September plate-change.

Mercedes offered no explanation as to why its overall sales shot up by 127% year-on-year in August, with the Sprinter accounting for 65% of them, but the SMMT said the 41% rise in the overall LCV market was driven by operators responding to regulatory changes, as well as “compelling deals” being offered by sellers on the latest models.

A factor likely to have affected the market is manufacturers pre-registering LCVs ahead of the introduction of the WLTP emissions regulation in September.

Meanwhile, Mercedes-Benz Vans has introduced driving-style monitoring as standard on the Sprinter. The feature is free, with a three-year subscription, from May 2019 production, as part of the Mercedes Pro Connect app, and can also be remotely retrofitted to existing Sprinters using over-the-air software updates. It enables a range of vehicle data, such as acceleration behaviour, anticipatory driving behaviour, coasting, and smooth driving analysis for each individual trip, as well as a holistic view of a whole fleet of vehicles for fleet managers.

Renault’s facelifted Master went on sale in September with a restyled front end, an elevated bonnet line and revised vertical grille, along with a new C-shaped lighting signature. The cabin has a revised dashboard and instrument panel, a fully integrated touchscreen, and increased storage of up to 105 litres. There’s a docking station for tablets and, depending on spec, R-Link Evolution and Media Nav Evolution infotainment systems, with Apple Carplay and Android Auto compatibility.

New driver assistance systems, including rear-view assist, side wind assist, front parking assist and blind-spot warning, are available, while autonomous emergency braking is now optional across the range. Engines are Euro6.2 2.3-litre bi-turbo diesels, available with up to 180hp. These are paired with six-speed manual or six-speed automatic transmissions.

Vauxhall’s rebadged Master, the Movano, also arrived in showrooms in September. It has the same 2.3-litre diesel engines as the Master, with outputs of 130hp to 180hp, but is offered with six-speed manual transmission only. Prices range from £27,745 to £39,815. All prices listed exclude VAT.

Peugeot and Citroen have also updated their respective large vans, the Boxer and Relay, with new Euro6.2 diesel engines and trim levels. The sister models from the two PSA Group brands both get three new 2.2-litre diesel engines, offering 120hp, 140hp and 165hp. These offer power increases over the previous 2.0-litre engines of 10hp, 10hp and 5hp respectively. All come with stop-start and a six-speed manual gearbox.

Citroen has rebranded the entry-level Relay trim level as Relay X. Both ranges are priced from £23,980.

Not to be outdone Fiat Professional has introduced a revised Ducato with a choice of four Euro6.2 2.3-litre diesel engines, producing 120hp, 140hp, 160hp and 180hp. These all come with six-speed manual gearboxes but, perhaps most significantly, Fiat offered a nine-speed automatic transmission with the two most powerful engines from launch in July and extended its availability across the line-up in September. The brand believes the automatic system will enable it to break into the supermarket delivery sector.

The Ducato is priced from £24,670 and Fiat has developed an electric version of the van for launch next year.