After several months of decline during lockdown the large van sector increased in July. 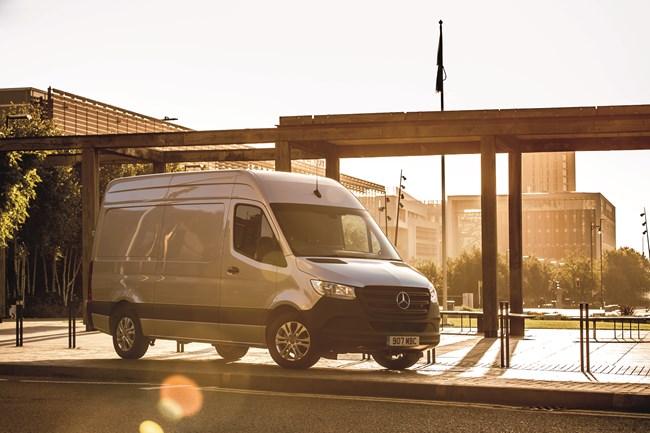 After several torrid months of Covid-induced decline the UK’s new LCV market increased in July to record the first year-on-year growth since January. The overall market was up by 7.1%, with 27,701 new LCVs hitting the road, according to figures from the Society of Motor Manufacturers and Traders (SMMT).

The Mercedes-Benz Sprinter was the biggest-selling large van in both July and the year-to-date, with sales totals of 2,581 and 10,713 respectively, putting it ahead of the Ford Transit, which shifted 1,785 units in July and 10,249 in the year to 31 July.

Electrification is starting to make its presence felt in the large van segment and it is no surprise to see Renault leading the charge with a new 3.5t version of its Master Z.E. plug-in van. Previously offered only as a 3.1t model, the new 3.5t version brings the Master Z.E. in line with its diesel equivalent.

It is available as a panel van, with volumes between 9.0m3 and 13.0m3 and up to 1,490kg payload; as a platform cab, with payloads up to 1,740kg and conversions such as a Luton Low Loader possible; and as a new chassis cab, with a maximum payload of 1,620kg and conversions including Tipper, Dropside and Luton Box Van available.

The powertrain is the same as that found in the 3.1t Master Z.E., comprising a 77hp motor with 225Nm of torque, and a 33kWh battery, meaning a driving range of up to 75 miles. A full battery charge is possible in six hours with a 7kW wallbox.

Prices for the 3.5t Master Z.E. start at £52,000, excluding VAT and including the government’s plug-in van grant. Orders opened in August.

Iveco is set to have another stab at breaking into the electric market by launching a plug-in version of the latest Daily within two years. The brand promises it will have a longer range than the previous electric model and the price will be lower because the cost of batteries is falling.

Attempts to sell electric Daily models in the UK have been unsuccessful to date thanks in part to the high front-end price.

Maxus (formerly LDV) already markets the EV80 large electric van, which is popular with fleets such as online food shopping firm Milk & More, but this year it has revealed its replacement for the diesel V80, the Deliver 9.

A 163hp 2.0-litre turbodiesel engine married to a six-speed manual gearbox powers the Deliver 9, which is up for grabs with front- or rear-wheel drive. All derivatives include electric power steering and autonomous emergency braking, while Maxus says a manual DPF regeneration button ensures the van can run at optimum levels, even when confined to urban assignments, by cleaning the particulate filter.

Ford has extended its Qualified Vehicle Modifier (QVM) programme by adding a Transit-based Welfare van, with the conversion carried out by Clarks Vehicle Conversions. The vehicle is fully type-approved and available across the Transit range with six or seven seats and a toilet. Other interior features include a fully lined anti-slip floor, microwave, hot water boiler and sink, fire extinguisher, and first aid kit. The exterior gets Chapter 8 livery, and options include Clarks’ Eco Solar pack, side and reverse cameras, an LED rear beacon bar, and tow bar step system with electrics.