Ford models top the sales charts but the expanding PSA Group is becoming the powerhouse in the light van sector, James Dallas reports. 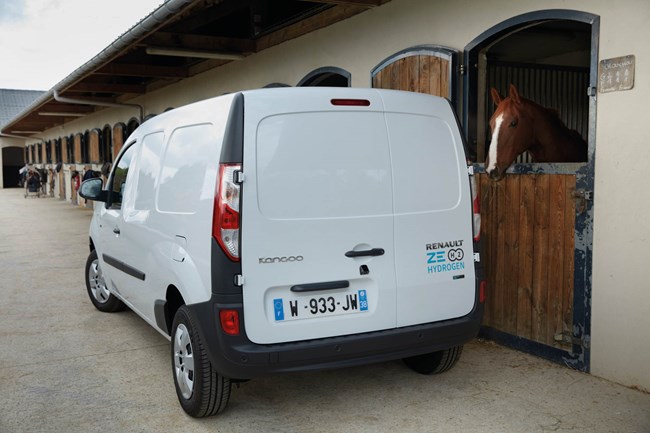 The Kangoo Z.E. Hydrogen will have a range-extender fuel cell

A strong finish to the year saw overall sales of LCVs grow 2.4% in 2019 to 365,778 units, according to the Society of Motor Manufacturers and Traders (SMMT).

In December volumes grew 7.7% to 1,857 year-on-year and 39.7% to 4,200 year-on-year in the respective small and light van sectors, although it should be noted there is a degree of crossover in these definitions, with some of the more diminutive versions of light vans, such as the short-wheelbase Renault Kangoo, Mercedes Citan, Citroen Berlingo and Peugeot Partner, for example, falling into the sub-2.0t bracket.

Nevertheless, generally, the small van sector has been shrinking in recent years in terms of the models on offer – with the disappearance of microvans, such as the DFSK Loadhopper, and compact cubed vans like the Peugeot Bipper and Citroen Nemo, not to mention the Vauxhall Corsavan car-derived van – leaving the Ford Fiesta Van and Transit Courier alongside the Fiat Professional Fiorino as the last vans standing.

None of these vehicles sell in huge numbers, with Ford shifting 4,609 Couriers and 2,206 Fiesta Vans last year, making the Courier the UK’s 25th best-selling LCV, while Fiat sold just 882 Fiorinos, according to the SMMT.

It’s a different story when it comes to light vans, which is a sector that ranks highly on manufacturers’ lists of priorities and houses some of the most innovative and sophisticated models in the market.

With Peugeot, Citroen and Vauxhall all coming under its umbrella, the PSA Group is now the dominant force in the sector with the brands’ trio of light vans all built on the same platform, and its hegemony is set to grow in March when Toyota launches its Proace City, which will also be produced on the same PSA assembly line. And with PSA in the process of merging with Fiat Chrysler, the Fiat Professional Doblo Cargo could be next in line.

Peugeot, Citroen and Vauxhall added crew versions to their light vans in the final quarter of 2019. These are powered by the same 1.5-litre diesels, with outputs of 100hp and 130hp, plus the 1.2 110hp petrol, that are available across the ranges.

Manufacturers have pioneered electric technology in their light vans and Renault, with its Kangoo Z.E., has been in the vanguard of this movement. In 2020 the brand is to extend its zero-emission offering with the introduction of a hybrid battery-hydrogen version of its light van, the Kangoo Z.E. Hydrogen.

The vehicle will be equipped with a range-extender fuel cell providing electric and thermal power of 10kW, which Renault claims triples the range of the Kangoo Z.E. Hydrogen compared to the 100% battery-electric derivatives. The manufacturer says the hydrogen-powered Kangoo’s range will be 370km (230 miles). The generation of thermal power means the use of heaters in cold weather does not reduce range capacity, according to Renault, which adds the vans can be fully charged within 10 minutes.

If you’re looking for something more sporty, however, then MS-RT, which belongs to Ford’s Qualified Vehicle Manufacturer (QVM) programme, has produced a modified version of the Transit Connect. Using styling and technology from Ford’s works rally team, MS-RT has given the Transit Connect restyled front and rear bumpers, new grilles, front and rear diffusers, side skirts and a spoiler.

The conversion also gets a stainless steel sports exhaust system, 18in OZ Racing alloy wheels with an optional limited-edition bronze finish, a carbon inlay sports steering wheel, and a handmade nappa leather and suede interior. Available options include a Maxhaust exhaust system with app-controlled soundtrack, a rally sticker pack, black exhaust tips and a full carbon steering wheel. Prices excluding VAT are £23,995 with a manual gearbox, or £24,995 with an auto, and there is a three-year, 100,000-mile warranty.