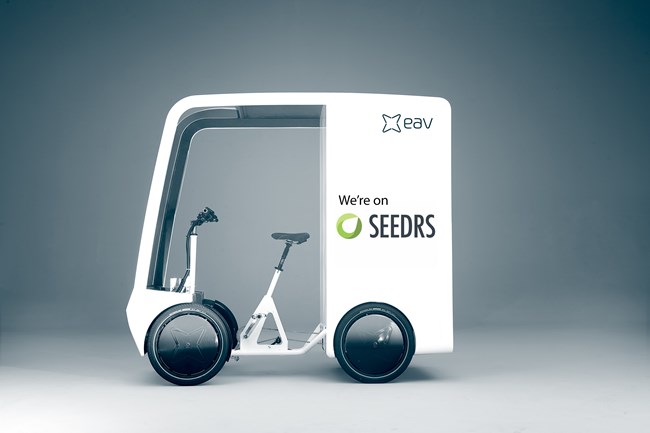 A crowd funding campaign has been launched for the EAVan, a new delivery vehicle from manufacturer EAV (Electric Assisted Vehicles).

The EAVan is described as an e-cargo bike that has been developed down from a van, rather than up from a bicycle.

Resulting from a clean air partnership between EAV and parcel delivery company DPD, it is a quadracycle that combines a 250 watt electric motor with pedal power.

It can be fully recharged in under six hours using a standard 13amp, 240v plug socket, or the battery can also be swapped out for a fully charged one to keep the EAVan in constant operational use.

To keep its weight down, it is made from advanced composites including carbon fibres and hemp fibres.

EAV says the chassis can also be widened and lengthened to meet other applications, such as flatbed trucks and ambulances.

Founder and technical director Adam Barmby said: “The EAVan is classed as a cargo e-bike, but really, we started from scratch and reimagined an entirely new type of vehicle to operate within the parameters of today’s zero-emissions landscape.

“The modular design allows us to extend or shorten the chassis and change the rear deck configuration to fit whatever brief we have.

“In addition to the design flexibility, there is also a whole new set of efficiencies that we are tapping into here. Realistically, the EAVan can move as fast or faster than a traditional van or car through many cities because of the different routing it can take.”

Executive chairman Nigel Gordon-Stewart added: “We’re already delivering the EAVan to DPD and demonstrating that they can operate more efficiently and environmentally than any vans, electric included, in towns and cities worldwide.

“Its adaptability to offer multiple applications could enable a very significant reduction in both pollution and congestion in urban environments.

“Our announcement of this round of crowd funding with Seedrs.com is very exciting allowing members of the public to invest in a disruptive transport-based business with a very exciting future.”