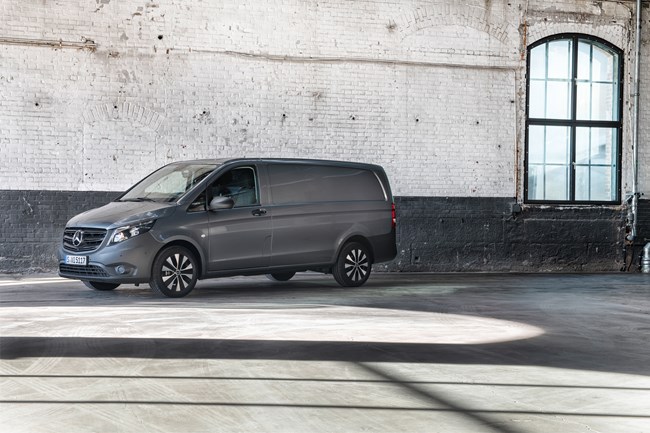 Mercedes-Benz has facelifted the Vito and introduced a new, four-cylinder 2.0-litre turbodiesel engine for rear-wheel drive models. It replaces the old 2.1-litre engine and had previously only been available with the Vito Tourer and Mercedes passenger cars.

There are three power options with the new engine: 136hp, 163hp and 190hp. Also available are two front-wheel drive models, which get a 1.7-litre turbodiesel engine with outputs of 102hp and 136hp, together with a six-speed manual transmission. All engines comply with Euro6d-Temp emissions standards.

The 136hp and 190hp 2.0-litre RWD vans, meanwhile, come with Mercedes’ nine-speed 9G-Tronic automatic gearbox as standard, while the 163hp piggy in the middle can be paired with either the manual or automatic gearboxes.

Like the new engine, the 9G-Tronic gearbox was already available with the Tourer model and on Merc’s cars.

On the outside, the Vito gets a new grille design and a choice of 17in, 18in or 19in wheels, while inside there’s a new style of cloth upholstery and a more extensive infotainment system.

All Vitos now come with the Audio 30 system, which has a 7.0in touchscreen with smartphone mirroring. Upgrade to the Audio 40 system and Mercedes adds navigation, with live traffic information when combined with a Mercedes Pro Connect subscription. (Pro Connect is Mercedes’ own connectivity and telematics system, which generates driver’s logs and allows the van to be locked and unlocked remotely.)

The manufacturer has also added a number of modern technology features to the Vito. These include an interior mirror that can be switched to display a rear-view camera image. Active brake assist becomes standard on the facelift, and warns the driver of hazards as well as increasing the brake pressure when it detects the driver performing an emergency stop. Finally, Distronic, Mercedes’ adaptive cruise control, which has been a staple on its passenger cars, now becomes an option on the Vito. As before, the light commercial gets airbags and seat belt warnings for both driver and passenger.

The Vito Tourer, the passenger version of the Vito, gets the same new engines as the panel van, but now also gets an electric option. The eVito Tourer is more powerful and has a longer range than the eVito panel van: it comes with 200hp and a 260-mile range. Thanks to a water-cooled onboard charger, it can charge at up to 100kW, which means that the battery can be topped up from 10% to 80% in 45 minutes. The eVito Tourer is available with long and extra-long bodies.