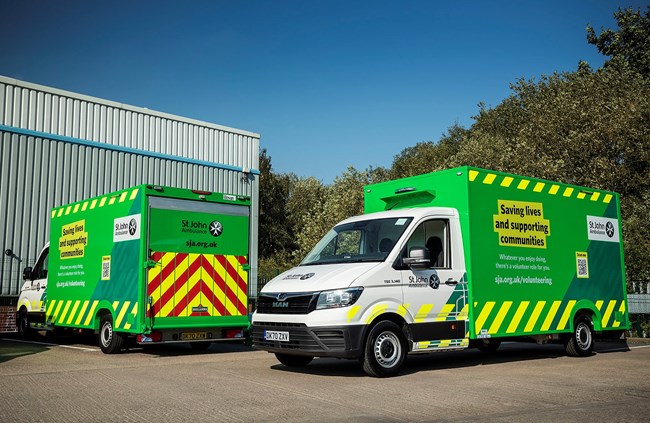 A new fleet of eight specially-designed logistics vehicles is to be deployed by St John Ambulance.

The new 3.5t vehicles are based on MAN TGE flat frame chassis cowls, and have been fitted by body builder Bevan Group with crash tested bulkheads, and plastic bodies designed to be light and easily cleaned.

The front-wheel drive vehicles sit 190mm lower than a standard TGE chassis cab, and the bodies are bonded directly to the chassis, rather than being bolted onto a sub-frame in the conventional manner.

This has allowed the inclusion of a drawbridge-style, full closure rear door that doubles as a ramp, allowing heavy equipment to be winched on to the load bed, avoiding the weight and complications of a tail lift, and helping the vehicles to exceed the 1.0t payload target set by St John Ambulance’s fleet team.

The vehicles carry medical equipment including defibrillators, oxygen cylinders, wheelchairs and stretchers, as well as generators and inflatable shelters, all of which is stowed on shelving and in cages.

The vehicles are the first from a new partnership between St John Ambulance and MAN, with the manufacturer set to supply vans of other sizes and specifications in the coming months.

St John Ambulance national fleet manager Rob MacIntosh said that previously the charity had either used two or three panel vans or a 7.5t truck to do the work of one of the new logistics vehicles.

He said: “The vehicle as delivered is entirely fit-for-purpose – everything has a place on the body, and we’ve been undertaking familiarisation training with volunteers from all over the country, so they understand how best to remove and return equipment as efficiently as possible.

“Our initial build interpretation meeting with MAN and Bevan Group marked the beginning of a consultative process in which with all three parties worked together extremely well.

“MAN and Bevan Group have done exactly what we asked of them and these vehicles represent a big step forward in terms of our capability, so, of course, we’re delighted.”

Bevan Group was recommended to St John Ambulance by MAN. MAN TGE international and national key account manager Dan George said: “We selected a sub-contractor that shares our own premium values, and could be relied upon to produce a body able to withstand an arduous 10-year life cycle.

“Having worked successfully with the bodybuilder’s team on other projects involving not only TGE but also heavier models from our product range, we know that its excellent reputation within the industry is well merited.”