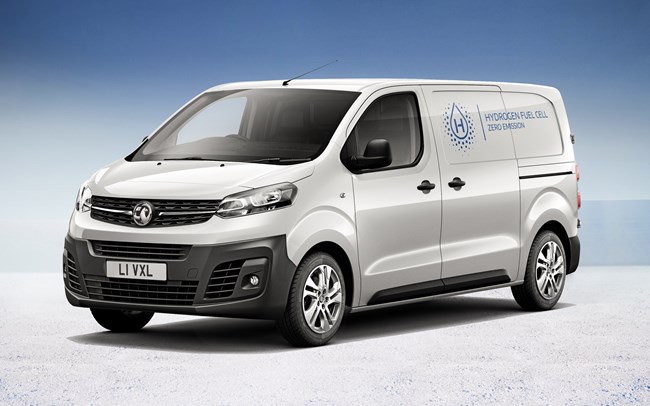 Vauxhall has unveiled a new variant of its Vivaro medium van powered by a hydrogen fuel cell.

The firm says the van, badged the Vivaro-e Hydrogen, will be able to cover up to 249 miles on a single tank of hydrogen, which can be refilled in three minutes.

The model is based on the existing battery-electric Vivaro-e, and along with the 45kW fuel cell will also feature a 10.5kWh lithium-ion battery, capable of being charged with a plug for a range of 31 miles, and also providing extra power when required, such as on start-up and under acceleration.

Vauxhall says no modifications are needed to the Vivaro-e’s body, with 4.95m and 5.3m wheelbase options, while payload increases to 1,100kg.

The Vivaro-e Hydrogen is due to go on sale in left-hand drive markets from the end of next year, and arrive in the UK in right-hand drive form from early 2023. Vauxhall says it is actively speaking with UK business customers about the potential deployment of the technology.

Vauxhall managing director Paul Willcox said: “Vauxhall is already leading the way with an all-electric van range, and now we are set to add hydrogen to the line-up as an efficient energy system of the future.

“Vauxhall-Opel has more than 20 years of experience in developing hydrogen fuel technology which offers zero emissions-in-use, a long driving range and ultra-fast refuelling.

“We are already in contact with UK fleet operators that want to go the extra mile on sustainability and we look forward to bringing Vivaro-e Hydrogen to the UK soon."