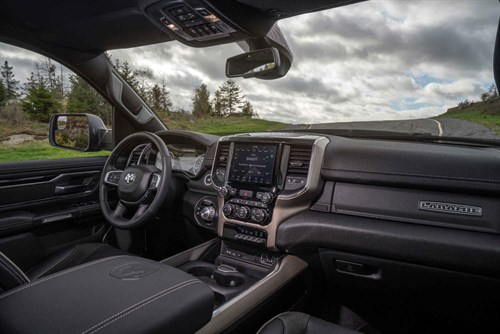 Americans like choice and the RAM is not short on trim levels. Even in the UK there will be five, from range-topping Limited down through macho-sounding Longhorn, Rebel, Laramie and Bighorn. There are also options, hundreds of options, although getting them on UK models might be a little trickier.

We’re driving the relatively modest Laramie, which will still come in at around £45,000, ex-VAT, yet on the inside is equipped to a pretty high standard. Substantial-feeling plastics are covered in a decent grade of leather, and the seats (again in leather) are nearly 50% larger than you’d find in anything in Europe with full electric adjustment.

There are acres of space in both the front and the back, making it really quite luxurious to travel in either row of seats. With all that space for people you might think there’d be little in the way of storage, but the RAM too has that in abundance: huge door bins, massive glovebox, and a central storage compartment between the front seats that is so big you could fit an American’s packed lunch in there along with a decent-sized bag.

From the outside, the engine creates quite a noise, but thanks to a massive increase in sound-deadening it is muted on the inside. You’re much more likely to hear the two huge exhausts burble and roar, rather than the engine, as you call on all that power.

It arrives rapidly, a severe surge pushing you into those big seats all the way up to its 5,600rpm peak. The gearbox isn’t bad either, with snappy changes from the TorqueFlight transmission that is actually a product of ZF. It can be a bit sluggish, and to really enjoy things it’s best to just leave it to ponderously pick up gears in its own time, but the RAM is ferociously quick and can reach 60mph in just over six seconds.

Ride comfort is smooth too, but given the enormous wheelbase that’s hardly surprising, although it is also aided by the optional air suspension, which allows four different height settings. An entry-exit setting drops the ride height to just an inch above the tyres while ‘normal’ raises the body to its lofty standard position.

The lowest driving setting is ‘aero’, which drops the RAM to midway between the exit position and standard ride height and goes a long way to improve stability while cornering, whereas ‘off-road’ takes it to the highest setting with a maximum 273mm ground clearance.

Speaking of off-roading, the vehicle is also far more capable than you would imagine, and the excessive speeds of the highway can easily be transferred to bumpy gravel surfaces without any problems. It may seem odd, but the biggest issue while off-roading is actually visibility.

Despite a commanding seating position, all of the bonnet, and in particular its high line to ensure there’s enough space for the V8, means seeing what is in front of you is particularly difficult. The same can be said about the vehicle’s other extremities.

The RAM is big enough and talented enough to get over most obstacles, but whether or not you will might depend on being willing enough to commit, as navigating most off-road terrains is a step into the unknown.

Does it warrant its “all-new” label? In short, yes. The RAM is both bigger and wider than the previous generation introduced in 2014, but also more dynamic and comfortable too.

Despite their ever-increasing encroachment into lifestyle vehicles, pick-up trucks like the RAM are built to be functional.

While it might not be used as such over here, it is nevertheless a practical vehicle that is capable of transporting more than one tonne in its nearly square 1.71m-long and 1.68m-wide load bed.

UK importer KWA – which hopes to sell you a RAM through a network of dealers that will include existing Fiat franchises – believes there’s a demand among existing Nissan Navara, Ford Ranger and VW Amarok customers looking to tow up to 3.5t with minimum effort. Whether or not they can live with the size will be another matter entirely, but like a Hollywood blockbuster they will be hooked if they do ever get into it.

If the RAM isn’t something that takes your fancy (see right) then there’s a plethora of other pick-up options available, although my personal favourite has to be the Volkswagen Amarok.

Topping the range is a 258hp version with a mind-bending 580Nm of torque. I have been lucky enough to drive it on a few occasions, on the autobahns in Germany where it effortlessly hit 180kph (112mph) and still wanted to give more, as well as the desert sands of Oman where it was faultless in climbing mountains of sand and blasting over boulders.

It was all very impressive, but on a recent drive on UK roads during a wet and slippery week the powerful 3.0-litre V6 failed to bowl me over in the same way.

The engine is undeniably epic and the acceleration of a truck weighing 2.2t rarely fails to thrill, but our bumpy, oddly cambered British country roads have dented my feelings for the most powerful Amarok. While that torque might be great for trying to reverse the rotation of the earth or perhaps towing a trailer (3.1t max, I’m afraid), over time it becomes tiresome fighting the steering wheel.

Less impressive was the average fuel consumption – yes, I did drive it hard, but 24mpg? No thanks. The Volkswagen Amarok is still my pick-up pick, but the lesser 224hp will definitely do for me.

The International Van of the Year report is sponsored by