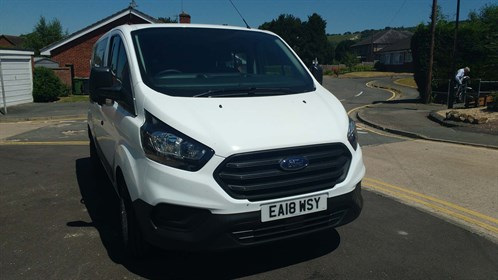 At the start of our time with this, the updated Ford Transit Custom, we asked whether the vehicle would address the criticism What Van? had given the previous version for a lack of interior practicality – a case of more style than substance.

Ford responded by increasing the space in the dashboard alone to 25 litres, for which they should be applauded (I even ended up using the drinks holder in the corner of the dash regularly to hold my phone while I followed its Google navigation instructions).

New features also include a fold-out cupholder beneath the gear lever, while the door panels have been redesigned to include three large stowage spaces. DAB, though, hasn’t been added as standard as wished for.

Something else that remains and was raised as an issue is the single sliding rear door – which isn’t a problem when parking at the school drop-off zone in the morning, as it’s located on the nearside, but becomes an issue when having to park on the opposite side of a busy road. I

found it safer to march my younger kids through the middle of the vehicle as there’s plenty of room and have them exit through the driver’s door.

I, unfortunately, had some issues with Bluetooth too, in that there were occasions when it would allow me to hear the person on the other end of line, but not allow them to hear me.

The only solution would be to pull over, take out the key and use my mobile conventionally.

Thankfully, though, the problem seemed to fix itself before I had chance to take it to a dealer for further investigation, so perhaps it was only a temporary glitch. 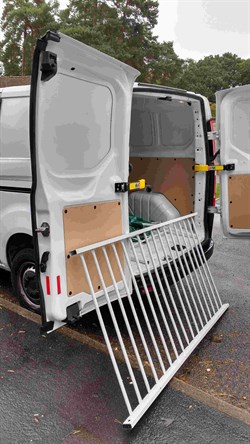 Since we first picked up our Ford Transit Custom it has gone on to become the winner of the What Van? Medium Van of the Year prize due to its “unprecedented style, road-handling characteristics and innovative load-carrying solutions”.

It certainly looks great, particularly from the front, offers steering that is nicely weighted and a ride that absorbs road surface bumps well, and comes in a variety of shapes, including this Double Cab-in-Van that carries both loads and people.

But what you gain in being able to transport three individuals in a second row of seats you, of course, lose in load space versus the regular Custom – 2.5m3 to be precise in this case, leaving you with 3.5m3 of room.

That amounts to a sort of squarish load bay, which is great for runs to the tip and chucking in children’s bikes for visits to the park, but not so good for awkward, lengthy items, such as a metal bed base (see picture).

Ford deserve plaudits for listening to the criticisms directed at this light commercial’s predecessor and doing something about them.

And while there may be cheaper rivals out there, they don’t have the Transit name, shift anywhere near the same quantity of units as the Custom does, or possess What Van? award-winning sector status.

Desirability 4/5
Base Custom proves you don’t have to offer the world to sell big.

Driving experience 4/5
Pre-facelift we said the Custom was in a class of its own for performance, handling and driveability – it still is..

Load bay  3/5
Not as much as the all-out van but something has to give if you want to carry a crew too.

Technology 2/5
There’s not much of it, and what there is isn’t all working.

Exterior looks  4/5
Tick! Front end new look is a winner, but not much has changed at the back.